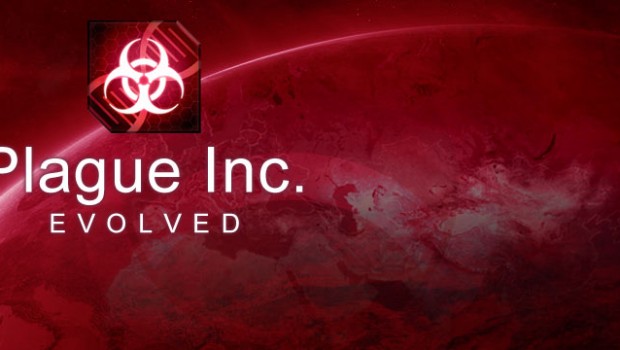 Ndemic Creations has melded together a game that borders on disturbing when you consider some super plague taking out the world’s population is just a horrific scenario. But here you are, not as the world’s savior but its executioner.

Right now the game is still in development, though it is very playable. So if you can stand the process of fixes as the game is tweaked and new things added, you really should grab this on STEAM now as an early access game.

There is a lot to be said about a game simulation that captures the attention of the actual CDC (Center for Disease Control) The CDC praised the game for the way it raises awareness in regards to public health… this game is a simulator of an epidemic using different variables that shows how a spread of a virus or plague can take place. The different things that can take place such as a pathogen evolving and adapting to things and making it more deadly are all modeled here. 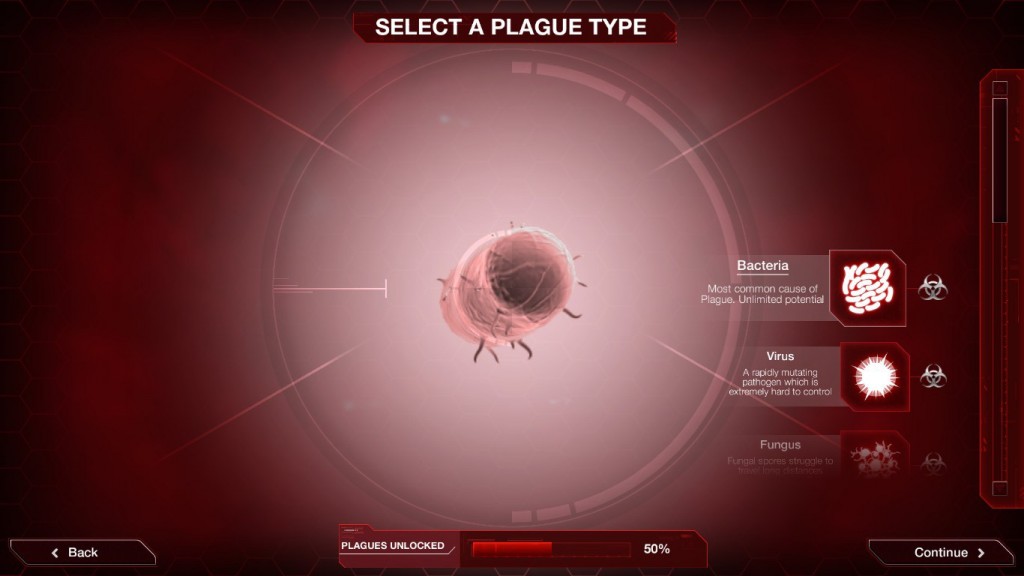 The player has full control over the plague, the goal is to nurture the plague or virus to the point of destroying humanity. There are plenty of tree choices to make in order to evolve the virus/plague and adapt it to different environments, and to also control symptoms and how it attacks other life forms such as humans, animals and birds alike.

Don’t let the simple looking game fool you though there is plenty of strategy to be had here. Especially if the player wants to win. There are things that the player must take into consideration, the sooner a virus/plague is more horrific, the faster the world’s scientists and doctors will work for a cure. 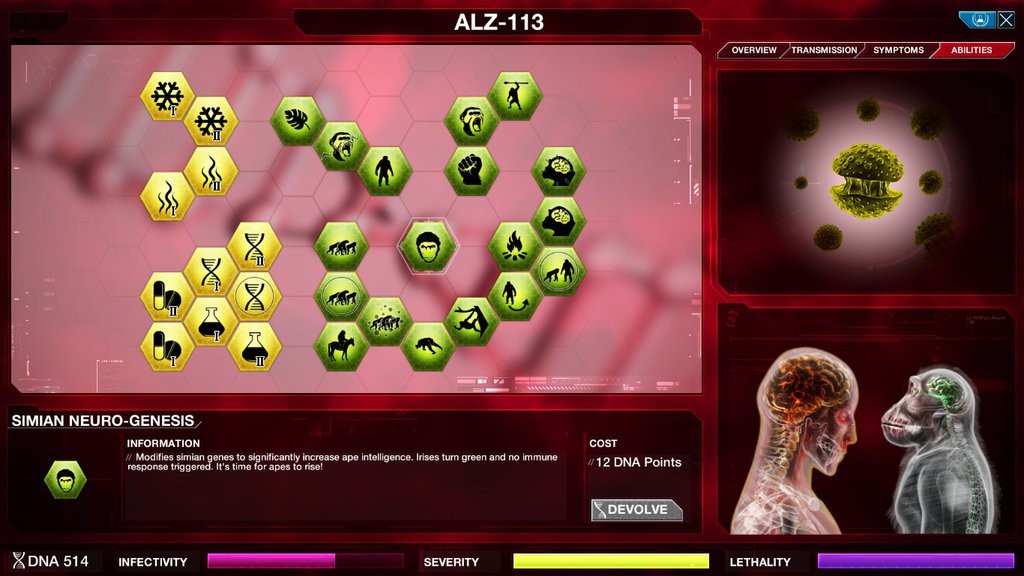 As if this was not enough there is a Planet of The Apes tie in and players can run the game in Ape scenario mode or Simian Flu. As some kind of virus makes the Apes smarter, the player mutates and grows the virus to help the Apes escape and slowly become smarter to the point that they join forces and create a colony. More on that in a bit on Ape mode as I call it.

In the game play we are introduced to a world map of… well the world. We see aircraft and ships coming and going from different locations all over the world. Players at the beginning choose the kind of virus or bacteria they want to start with and then what country they want to start infecting first.

The world map is the main playing screen, but there are other screens that include different things you can do with the virus, with the different traits players can control how fast it spreads and what environments it thrives most in, what symptoms it shows….. And how resistant it is to antibiotics and how hard it is to research the bug. 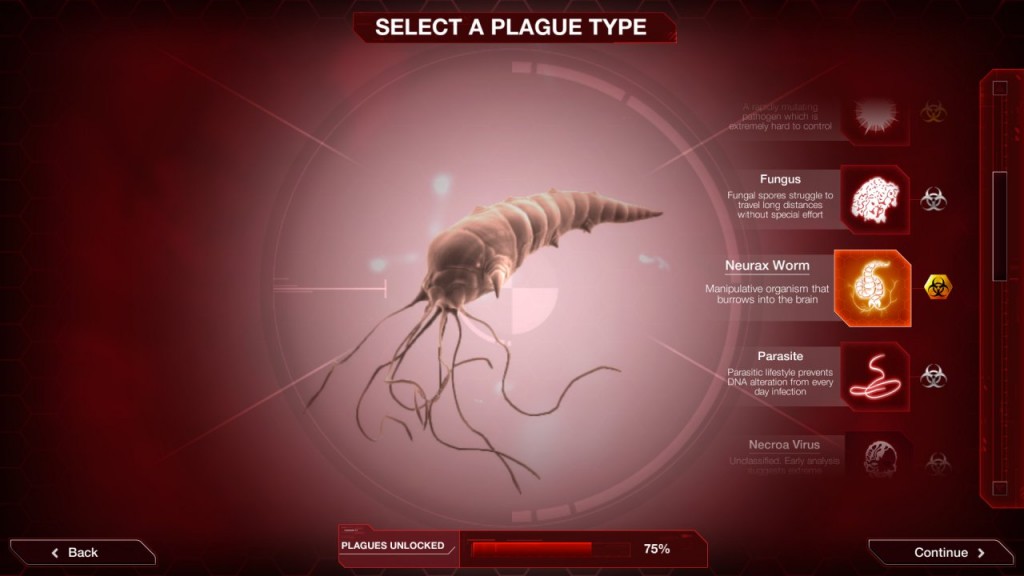 Players evolve the virus/plague by spending DNA points for different traits. Players get the points by infecting people, killing them, and spreading into other countries. DNA, and sometimes plague spread point bubbles show on screen and the player has to burst them to collect the points. Sometimes the virus evolves on its own without spending points. Which is great for you the player.

As things start to ramp up the bubbles appear sometimes fast and numerous.  If players do not pop the bubbles they do not get the points. Other types of bubbles can pop up such as blue research bubbles which are blue and are represented by a lab beaker symbol….. these bubbles work against the player as the scientists and Doctors start to work on a cure. Popping the research bubbles slows down the research giving the player more time to infect more people.

As the humans become aware of the plague and they hone in on researching and working on a cure to wipe the plague out. Borders and airports and ship ports may get closed down to fight the spread. Players can counter this by mutating the plague virus to spread to animals and even insects thus causing more spread without the aid of traveling humans. Imagine migrating birds or bighting insects spreading the disease.

If the plague does not infect and kill people faster than the scientists and Doctors research for the cure, players lose the game as the plague gets wiped out. It’s macabre but freaking addictive game play and can really open your eyes to the scale of what can happen in respects to some dangerous plague spreading. Sure the game goes to extremes and is on a grand scale, but without the technology of today and fast actions of countries and governments the thought of what could happen is truly horrific. 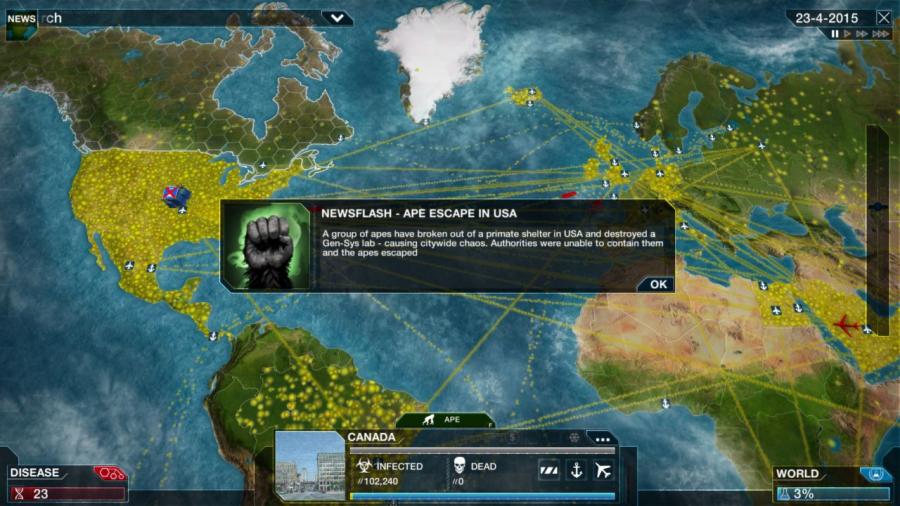 Either way you play it, this simple looking, but freaking addictive game has some replay value. As the player wins at games and destroys more of the earth, each new game may reward the player by unlocking other new types of virus, or spores and various other nasty bugs and DNA strands to make an ultimate killing plague.

That replay value comes when the player decides to try a different strategies, such as keeping the virus from the far more horrific things and only working as a common cold perhaps, until such time as they release the mutations in the plague that start killing people. What about starting in a different country how will this effect things? Maybe try the game at different difficulty levels to really have to change the players approach at how the game is played. 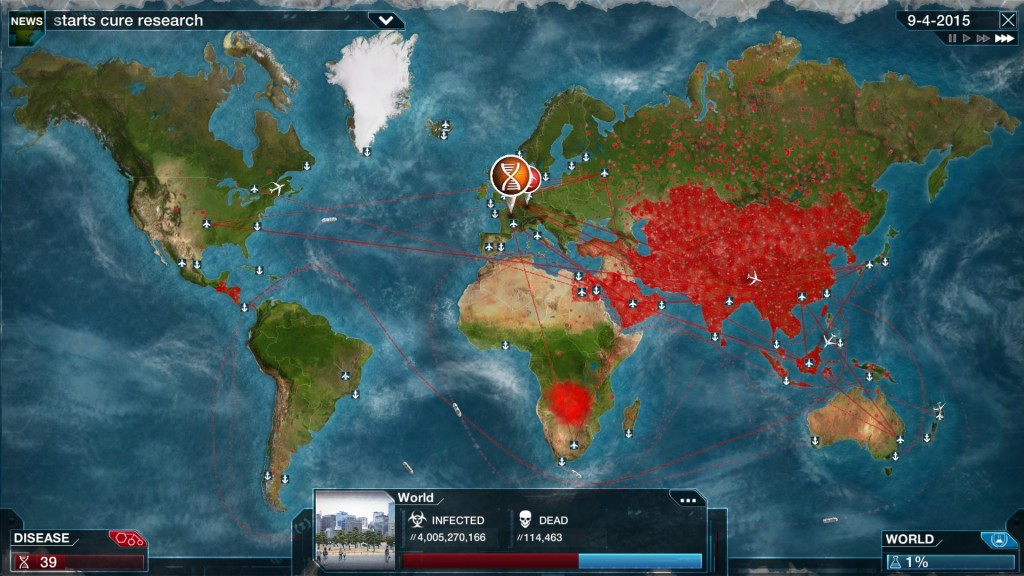 As you play you can’t help but feel like the evil villain in a story to destroy the world. Plague Inc: Evolved, a fiendish game designed to infect the player into playing more and lo and behold maybe even open your eyes to how dangerous some viruses can be. Excellent!