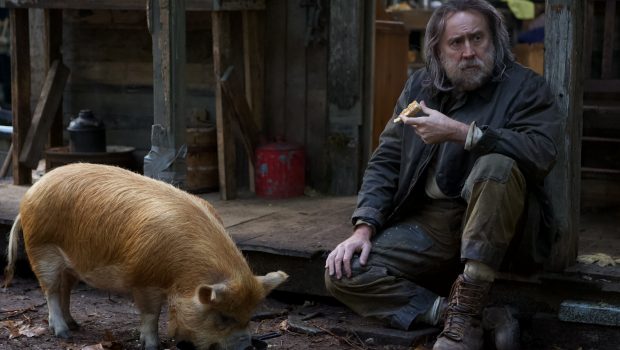 Nicolas Cage is excellent throughout Pig, an absorbing character study from debut filmmaker Michael Sarnoski. The ability of a novice director to draw a muted, subtle performance from the normally overwrought Cage is a miracle. Crafting a compelling and highly original drama about grief around the radical actor is another. While there is discipline regarding how the actors are directed, their performances are further complemented by Sarnoski’s subtle filmic style. His technical choices ensure Pig is told in an unobtrusive manner, allowing the audience to grasp cryptic narrative points themselves. Consequently, Pig challenges us and emotionally resonates because of the story’s originality and the execution of the bleak but meaningful themes.

Cage stars as Rob, a shaggy haired recluse living alone in the woods of Oregon. His major source of income is using his beloved pet pig to sniff out truffles. He collects the goods and sells them to a young buyer named Amir (Hereditary’s Alex Wolff) who arrives in his sportscar and brings supplies. Their working relationship does not extend beyond the deals made together in the woods. One evening, Rob is alone with the pig in his cabin only for the door to be smashed open. He is bashed to the floor and his prized animal is taken from him. The attackers’ identity is largely unknown. Rob suspects it was a pair of junkies, but more sinister motives remain unclear. Left bloodied and scrambling to reclaim his animal, Rob calls the one person who can help him: Amir. While reluctant to accompany each other for too long, they travel to the city for answers. It becomes apparent Rob once lived an entirely different life and made powerful enemies. Meanwhile, Amir finds himself at odds with his own father, Darius (Adam Arkin). The two continue to grieve over their own family tragedy.

Some of the most compelling facets of Pig are Sarnoski’s directorial choices. In the early scenes, he opts to shoot Cage from long angles in the forest. The darkened milieu of the woodlands and the camera’s physical distance highlights Rob’s isolation and emotional disconnect from society. Rob is detached from the cityscape and his identity because he is burdened by grief. His suppression lies on a tape he finds himself unable to play entirely because he is hiding from life’s irreversible nature. Additionally, Sarnoski favours shooting scenes in continuous, unbroken takes. In an early scene, Rob is framed in the doorway looking at his pet pig and ignoring Amir’s words. The extended shot duration underlines his gaze and his resistance to people and excessive consumerism. Rob’s grief and measured lifestyle suggest he realises the frivolousness of materialism compared to nature, such as the forest and death itself. It is why Rob offers long nihilistic monologues about the world being flooded and why he lacks self-preservation. For example, throughout the film dry blood from the attack is left untreated and smeared across his face because he is seemingly unmoved by death. Consequently, Sarnoski’s stylistic choices are effective in unobtrusively filming the actors while underlining the characters’ psychological depth.

Another impressive feat is how Sarnoski and his co-writer, Vanessa Block, choose to contain and slowly reveal the story’s exposition and revelations. The characters’ previous lives are withheld, meaning what has sent Rob into his semi-suicidal state is highly suppressed. Rob’s backstory will not be unpacked here in detail because it should be discovered without preconceptions. Watching it unfold leads us to deduce his contradictions. He is unafraid of death but emotionally static because of his grief. In a quietly funny moment, he bleeds while seated in a pretentious, upmarket restaurant and is asked if he needs medical attention. His nihilism is also embodied in a disturbing, highly original sequence in an underground fight club. The brutal scene asks the monetary value of a person’s identity and how much punishment they will endure. The moment emphasises Rob’s belief that death is inevitable because of the terrible life events haunting him. 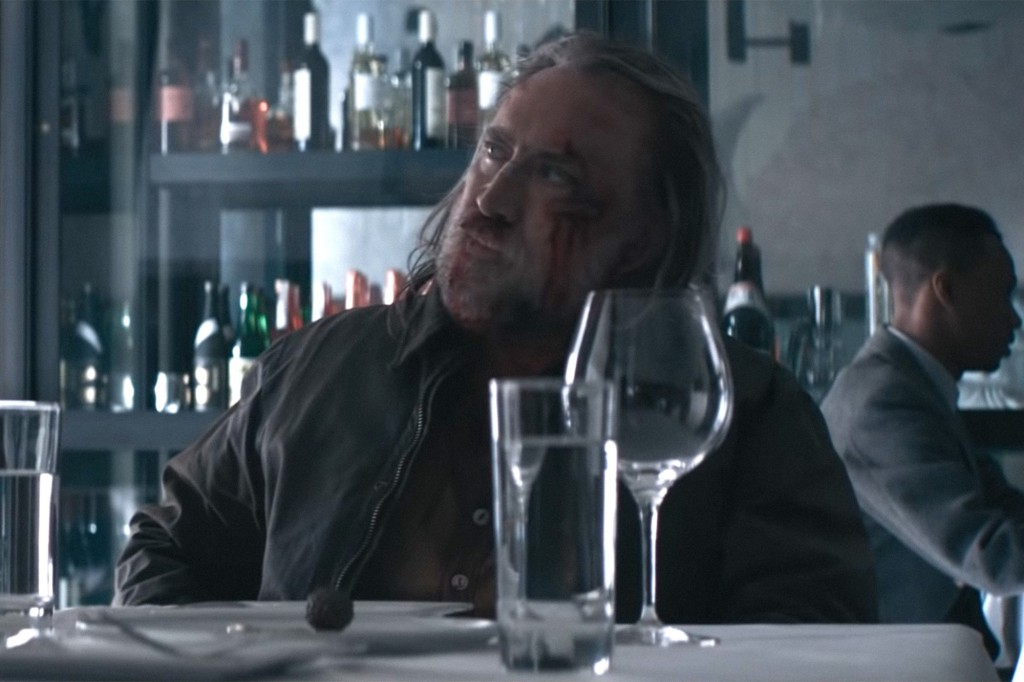 The intertwining nature of grief and capitalism is explored through a cliché-free subplot involving Amir and his father. Their conflicted relationship emphasises how capitalism and status threaten to divide families. Amir though subverts his spoilt yuppie veneer by emerging as more vulnerable than expected. He is wounded by losing someone in his own family and like Rob he is unable to progress. Meanwhile, capitalism is rampant throughout other aspects of the story. There are small merchant camps, high-end restaurants, and brutal underpaid kitchen hands. Money is prevalent throughout this shadowy culinary nightmare Sarnoski has forged, which includes a provocative comment on how big business and industry aims to destroy promising, smaller enterprises. The threat of Rob’s excessive nihilism derailing Pig is countered by deadpan humour and social satire, which gently complement the story’s sharp edges. It is quietly funny seeing a bloody, dishevelled Cage limping through the upper echelon of high society. Similarly, an unexpectedly bloodless finale further transcends the bleakness and the simplicity of labelling Pig as a dark revenge thriller.

The largest talking point around Pig is undoubtedly the quality of Cage’s performance. It is one of his best roles in years and works effortlessly to subvert the shameless overacting for which the actor has grown notorious. Instead, he provides a deeply muted, restrained performance. It is one driven by a laser-like intensity for his character’s major goal. ‘I just want my pig back’, Rob dryly repeats throughout the film. Thankfully, there is only one moment of explosive anger, well handled, which Rob comically directs at Amir’s sportscar. Otherwise, it is an entirely minimalist, subtle performance from Cage, and it climaxes with a terribly moving scene of raw emotion. While there is understandable buzz around Cage’s performance, Alex Wolff also impresses in how he defines Amir. While first appearing as an obnoxious rich kid, Wolff ensures Amir is far more complex by embodying the weight of grief in his character’s life. As his father, Adam Arkin’s small but essential role proves quietly unsettling throughout the story. 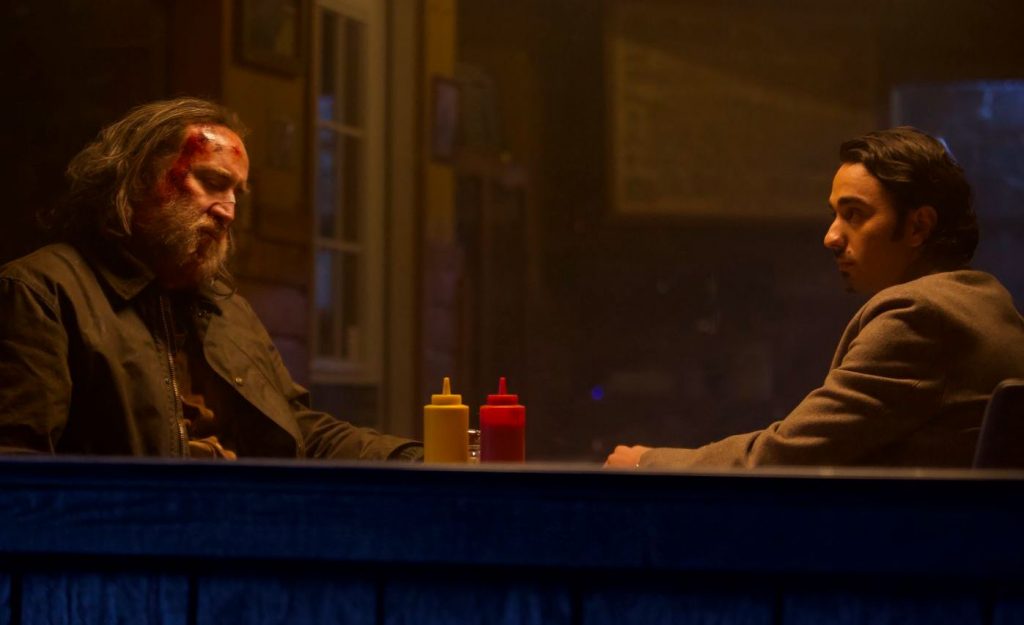 What is strong about Pig is how Michael Sarnoski trusts the audience to understand his film. There are deliberately oblique moments where we attempt to piece together the characters’ different motives. The ambiguity is pivotal in ensuring we continue processing the narrative’s complexity, particularly Rob’s backstory. We come to understand the forces that drove him to shun the meaningless nature of status and money. Furthermore, Cage’s intense performance is a superb display of quiet, minimalist acting. He perfectly humanises his character’s secluded mindset. Alex Wolff proves a humorous and touching foil because his character is affected by the weight of his own grieving heart. The film suggests many dispensable elements in life, including material goods, food, and money. Our most aching and personal memories offer deeper resonance and transcend materialism and wealth. Pig is about acknowledging the irreversible nature of grief and accepting the bleakest memories of our lives. It is a beautifully acted, complex film deserving of repeat viewings.

Summary: Pig is about acknowledging the irreversible nature of grief and accepting the bleakest memories of our lives. It is a beautifully acted, complex film deserving of repeat viewings.