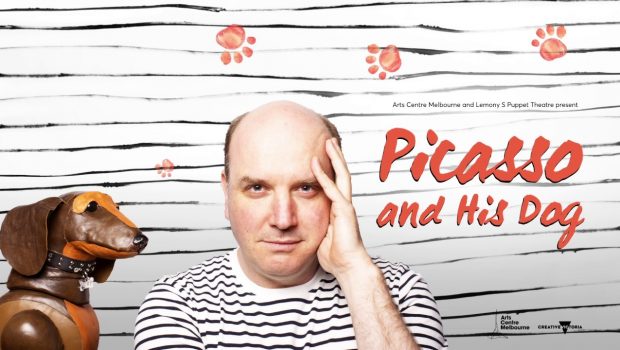 Picasso and His Dog, inspired by the true life story of the eminent Spanish artist and his much loved canine companion Lump, will be performed at Arts Centre Melbourne on 23 & 24 March 2019. Lemony S Puppet Theatre’s work for children aged five and above celebrates the animals with whom we share our lives while exploring what it is to be creative and to create.

The story follows Pablo Picasso and his relationship with his best friend, Lump, a cheeky sausage dog with an inquisitive nature. The work travels across time and space in a series of imaginative leaps using puppetry to transform the detailed set design as the performers play with scale, shadow puppetry, visual illusions, painting and live art-making on stage.

The real life tale of Picasso and his dog began in 1957 when he arrived at Picasso’s home with his then owner American photographer David Douglas Duncan. Picasso enquired if the dog had ever had a plate of his own. When Duncan responded no, Picasso picked up a brush and painted a portrait of Lump on his own dinner plate. Lump immediately felt at home with Picasso and the two were in each other’s lives from then on. He was also an inspiration for him, appearing in 54 of the artist’s works.This friendship lasted for 17 years and, perhaps not content with life on Earth without each other, both died in the same year.

“Picasso and His Dog is a show for anyone who has ever patted or loved another creature. While inspired by the story of Lump and Picasso, it’s a story we can all recognise for sometimes it’s the non-humans in our lives that make us better people.” says writer and director Sarah Kriegler

Lemony S Puppet Theatre is an award-winning Melbourne-based theatre company with puppetry at the core of its work. Its repertoire includes the critically acclaimed Green Room awarded Captives of the City and Green Room nominated Apples and Ladders. Picasso and His Dog will also be performed at the Castlemaine State Festival 2019.

As part of the season Arts Centre Melbourne is also giving children the opportunity to participate in the Lump’s Shadow Creative Workshop before or after the performance at Arts Centre Melbourne’s learning hub, The Channel. The hands-on creative workshop gives participants a chance to create a shadow puppet of an animal close to their heart.

Picasso and His Dog is part of Arts Centre Melbourne’s year-round Families Program, which was launched in August 2009 and has grown in reputation to become a highly respected program nationally and internationally. Featuring intimate and large-scale theatre from some of the world’s most respected companies and a diverse range of interactive workshops, the program is robust and growing in size, scale and scope.