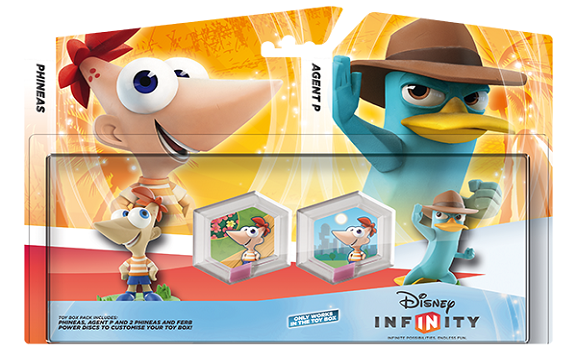 Bringing new Adventures and toys to Disney Infinity, and allowing players the possibility of unlocking the “ultimate pack” lightsaber within the game, Phineas and Agent P figures will officially be in Australian and New Zealand stores tomorrow (8 May), available individually and as a Toy Box Pack.

Both character figures are accompanied by their own unique Adventures. In the Phineas Adventure, players are set into a giant pinball machine and challenged to create a play field where they can destroy waves of oncoming robots.In the Agent P adventure, players can participate in a top-down adventure with side-scrolling elements that pay homage to old school arcade games.

The Phineas and Ferb Toy Box Pack will also include two new power discs to give players’ Toy Boxes a makeover. The “Tri-State Area Terrain” Texture Set and the “Danville Sky” Sky Theme will provide players with well-known location backgrounds from the show, including the Doofenshmirtz Evil Incorporated building and a small waterslide park invented in one of the cartoon’s episodes.

As a reminder: Disney Infinity players who own all of the figures (crystal variants not required), including Phineas and Agent P, and have them in their Hall at a minimum of level one, will unlock the “ultimate pack” lightsaber.

See below for full descriptions of all Wave 3 Power Discs.