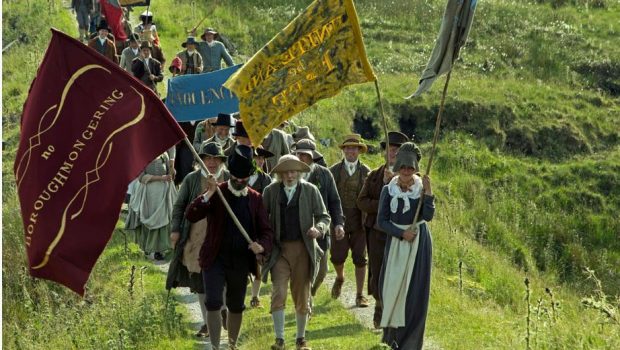 Mike Leigh’s new historical drama, Peterloo, is impeccably made but lacking a deep emotional centre. It reinforces the difficulty of translating historical events into the compressed time frame of a film. This is a pity because the material, including what led to the Peterloo Massacre in 1819 and the contrasting political voices organising the protest, is potentially fascinating material.

It is the narrative’s ambitiousness, specifically its attempt to cover all angles and major figures, that dilutes our attachment to the characters. The film adopts a multi-plot structure, but the fragmented editing of these threads renders the tragedy as impersonal.

It is important to outline the film’s historical context. Following the end of the Napoleonic Wars, Britain faced great civil unrest and the massacre itself became a defining event in the country’s history. Unemployment was high, wages were low, food shortages were common, and the vote was limited to 2% of the population.

Consequently, there was passionate discussion about how to force the monarchy to improve living standards. Some believed in violent protests, but others argued for a peaceful march.

Despite holding a weapons-free rally in St. Peter’s Field in Manchester, sixty-thousand protesters were met with intense, barbaric military action. At least fifteen innocent people died and hundreds of others, including women and children, were injured.

The film opens right after the Battle of Waterloo has ended. A young bugle player (David Moorst) stands shell-shocked on the battlefield. He returns home to his family where some of his loved ones, including his father, attend political forums. However, his mother, Nellie (Maxine Peake), is sceptical, so she and several other women opt to attend their own political groups to discuss the country’s issues themselves. 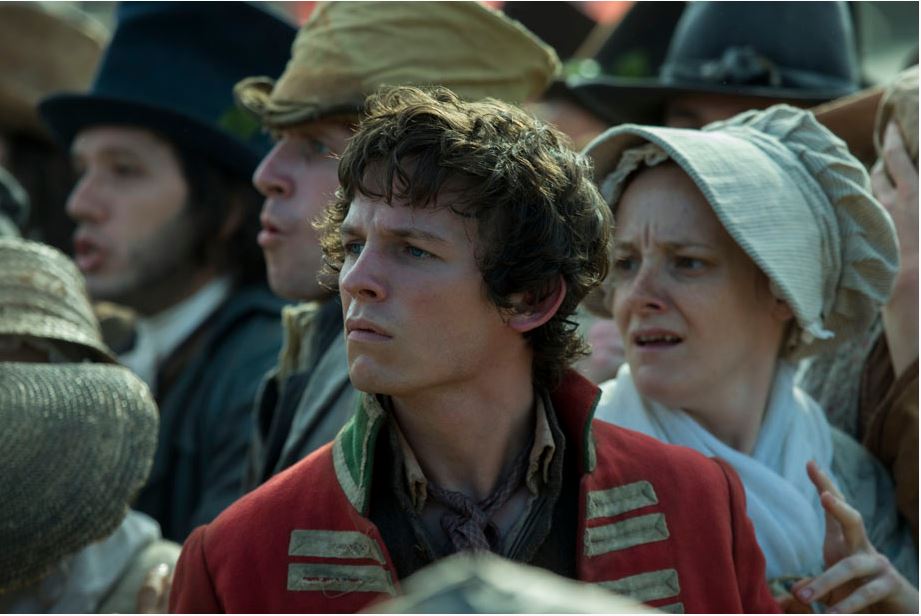 Meanwhile, Henry Hunt (The Imitation Game’s Rory Kinnear), a passionate speaker, is invited to address the march but will only do so if it is a non-violent protest. Others believe that strong action against the Prince Regent (Tim McInnerny) is needed. Simultaneously, government spies look to infiltrate the protest groups, and there are bureaucrats enforcing tough punishments and dithering over how to handle the conflict.

From a technical perspective, Peterloo showcases the confidence of Mike Leigh’s direction. He and his cinematographer, Dick Pope, have packed every scene with minute details that enhance the film’s already Dickensian textures. For example, there is a wide shot of two men having a heated argument. Standing between them is a silent maid and the dirt on her wrists and the sweat around her neck is visible.

It typifies the incredible attention to detail. The scale also resembles a grand epic, perhaps comparable to Stanley Kubrick’s Barry Lyndon (1975). No more is this apparent than in the protest scene, which showcases a vast number of extras and the volume of work by costume designer Jacqueline Durran (Atonement, 2007 and Anna Karenina, 2012). 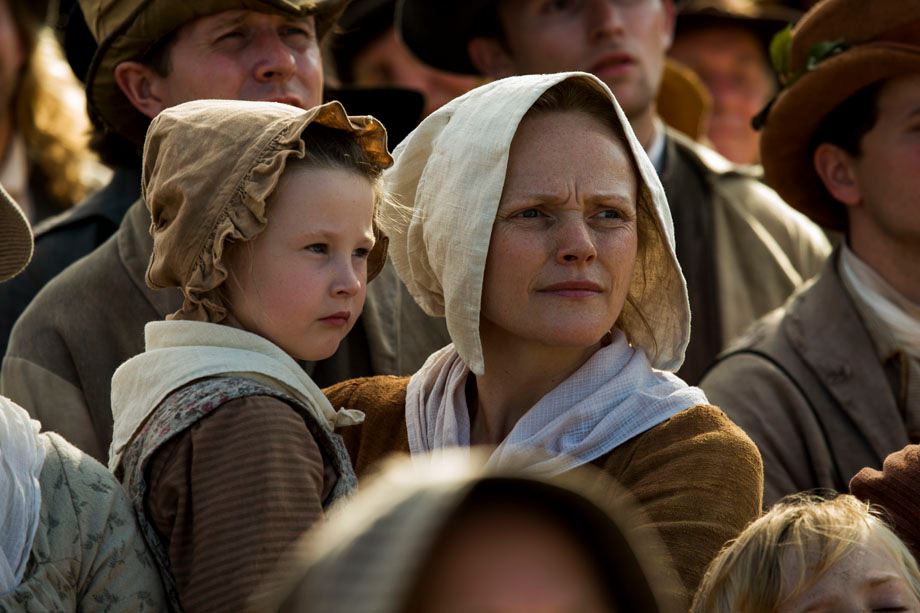 The film’s spaces are also used to express political and thematic ideas. The vast green pastures of the countryside are filmed in a lush, painterly way. They dramatise the scenes where people are holding their political forums so that the open spaces reflect the value of freedom of speech and political discourse. In contrast, the dark narrow passageways infer fascism and the repression of the era, such as when protesters are thrown into the holding cells and beaten.

Unfortunately, Mike Leigh’s screenplay lacks one central character to provide an emotional centre and personal resonance. There are so many characters throughout Peterloo that it becomes disjointed and loose. Beyond their political viewpoints, the film also fails to provide them with inner lives and meaningful arcs that change their perspectives. Sometimes the characters disappear for long stretches and never return.

Long monologues and speeches form the bulk of action too, which means Peterloo compares to a lecture on political issues rather than a dramatisation. Upon reaching the climax, the mash of bodies typifies how Leigh has shaped his film. It is a collision of only semi-recognisable faces. It is suitably brutal but without the attachment to the characters it is not as emotionally involving as expected. 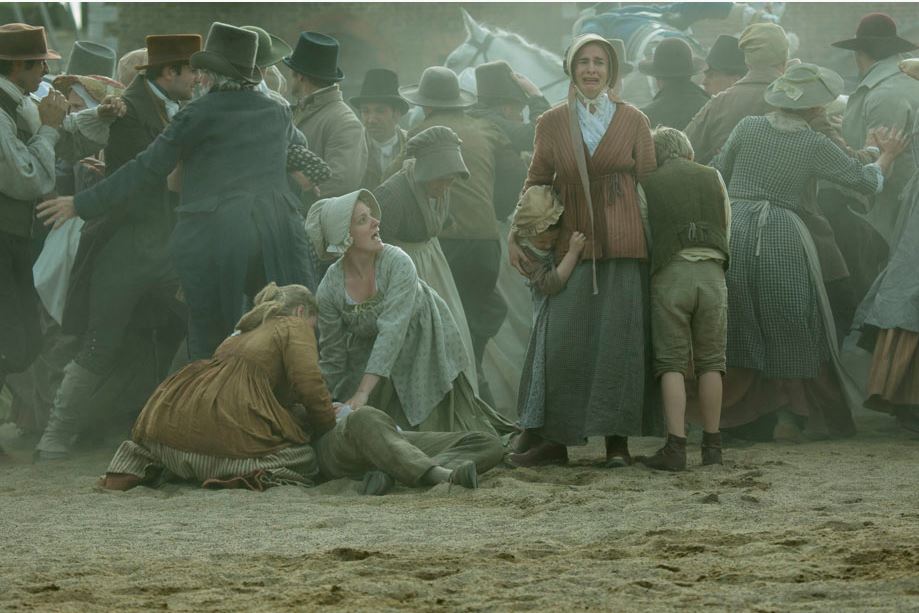 Some of the political discussions are interesting, particularly the discourse about whether to take violent action or not. The actors are passionate and fiery with their deliveries too. Yet there is also a degree of simplicity surrounding the arguments because the bureaucrats are collectively portrayed as wicked one-dimensional caricatures with few shades of grey.

The thinly drawn characters reduce the conflict to a simple binary of non-passive protesters and heartless, meddling politicians. Perhaps the depiction is accurate of the large personalities of the time, but the number of monologues still weighs the film down. One humorous moment during a forum though is when the political language is too florid for the commoners so one woman argues that they do not know what the speaker is talking about.

Arguably, the film’s best dramatic moment occurs during a court scene. A man argues that he stole a coat because its owner already had one and he was cold and needed it to survive. However, the judge is merciless and lays down a harsh punishment. The conflict is simple, elegant and impacting because it is pitched between two viewpoints rather than a single voice. 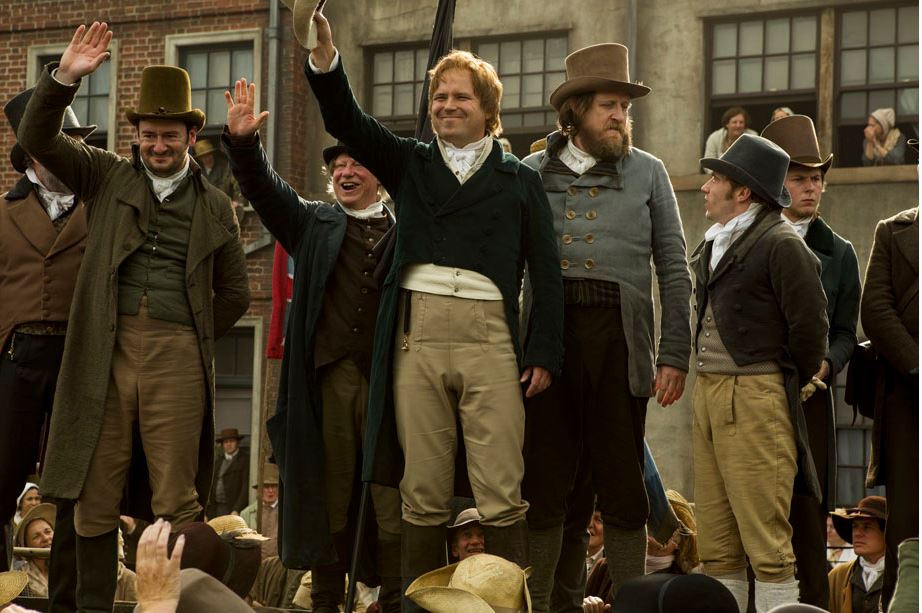 While beautifully crafted and framed, Peterloo needed a major character to intensify the story. Rather than detailing one strong composite character and adding various political viewpoints to counter that perspective, it attempts to cover as many characters as possible. Consequently, the story is emotionally disconnected and lacks the deep attachment of Mike Leigh’s best work.

The political discourse is sometimes interesting, but the use of monologues can sometimes transform the film into a history lesson rather than a dramatic recreation of the period. Perhaps if it was more focused before its brutal climax it would have achieved a much greater emotional impact. Ultimately, it is a confidently made but ambitious failure.

Summary: Peterloo is impeccably made but lacking a deep emotional centre.