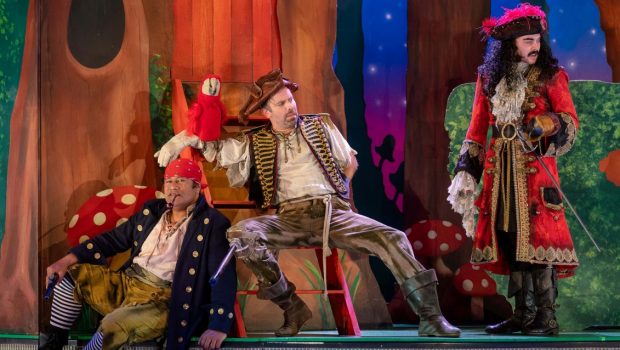 Summary: Peter Pan Goes Wrong is a very amusing play and if I had a chance to see it again I certainly would!

In a similar vein to the highly amusing The Play That Goes Wrong (2017) where everything and anything went wrong, the bumbling Cornley Polytechnic Drama Society return in order to retell the much loved J. M. Barrie classic of Peter Pan. Needless to say, Neverland never looked this bad but thankfully in a good way courtesy of this thoroughly comedic premise as the cast and crew attempt to get through one night without any mishaps. 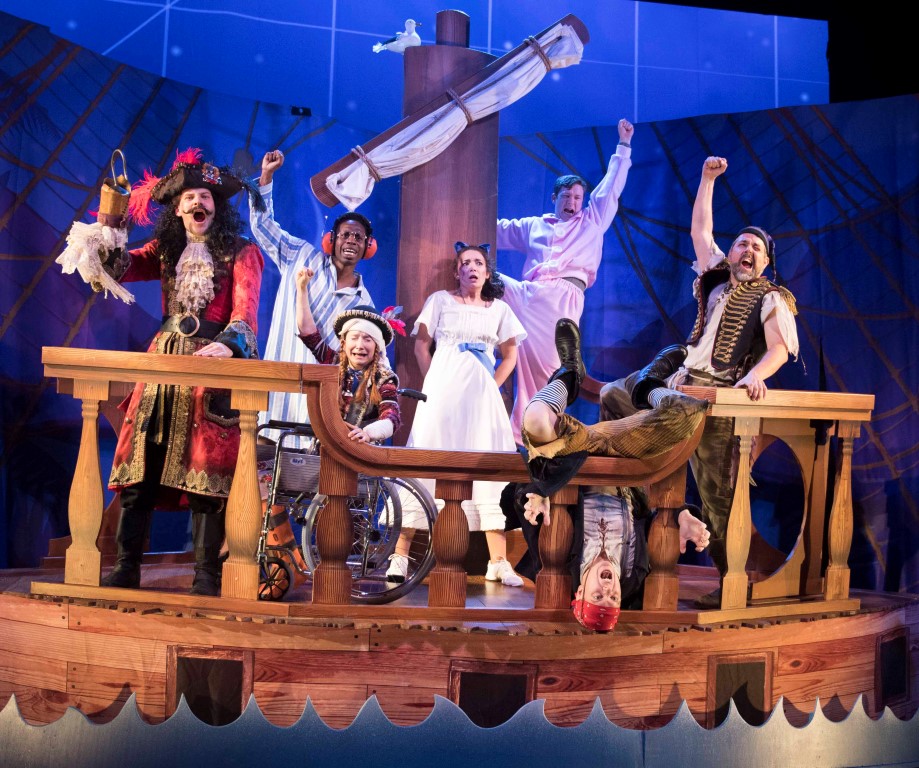 Besides the clever sets and special effects, what made the hi-jinx of this play work was the excellent cast which is led by the very talented Jay Laga’aia and equally talented Darcy Brown, Francine Cain, Connor Crawford, Adam Dunn, Luke Joslin, George Kemp, Jordan Prosser Tammy Weller, Tegan Wouters, Matt Whitty and Jessie Yates who get into their roles well. So while they play the actors from the Corlney Polytechnic Drama Society, they also play characters from Peter Pan which makes for some excellent comedy. 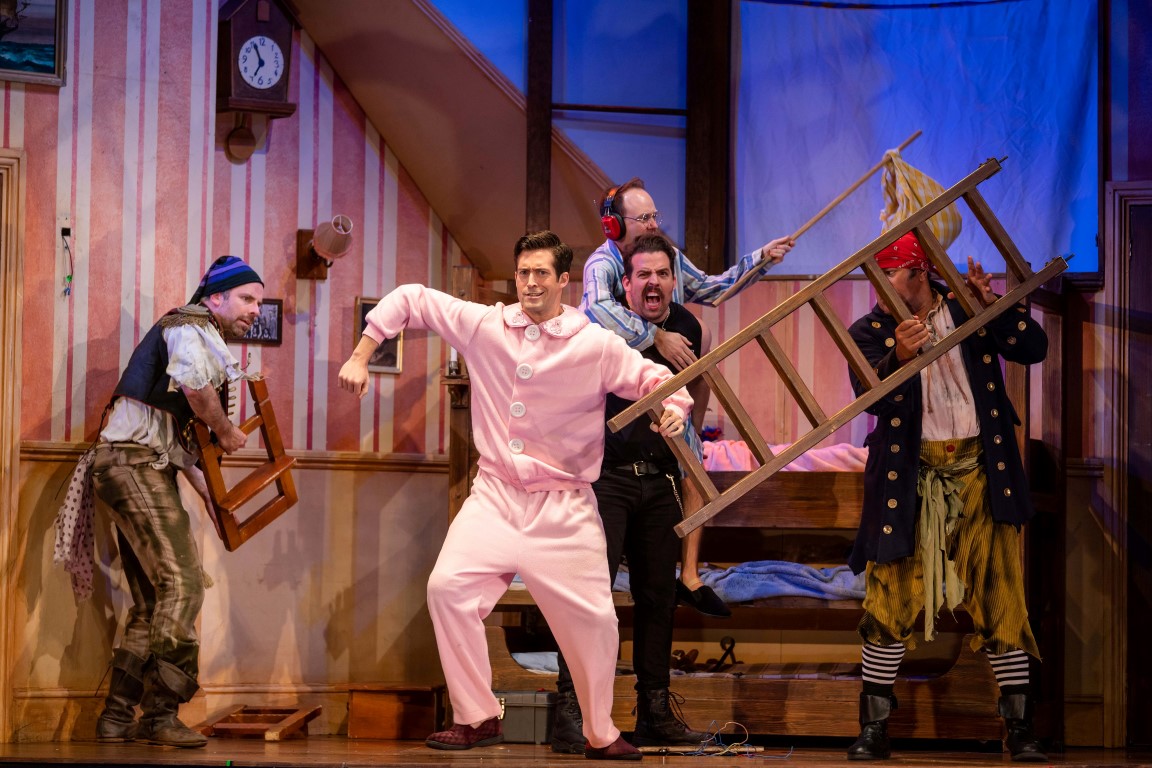 There’s also an element of illusion as well with audience interaction… so while we arrived at the Playhouse (Arts Centre Melbourne) about 6:40pm to take our seats, it seemed the show had already started as a person tried to climb down from the boxes to the stalls much to the bewilderment of some audience members. Then one of the ‘stage hands’ asked the audience if anyone had a hammer, where he turned his attention to me, asking if I could go home to get one, where I amusingly said of course, provided you’ll hold the show for me until I come back. This led to another performer dragging a huge hammer onto the stage which led to more comedic hysterics from these bumbling stage hands. 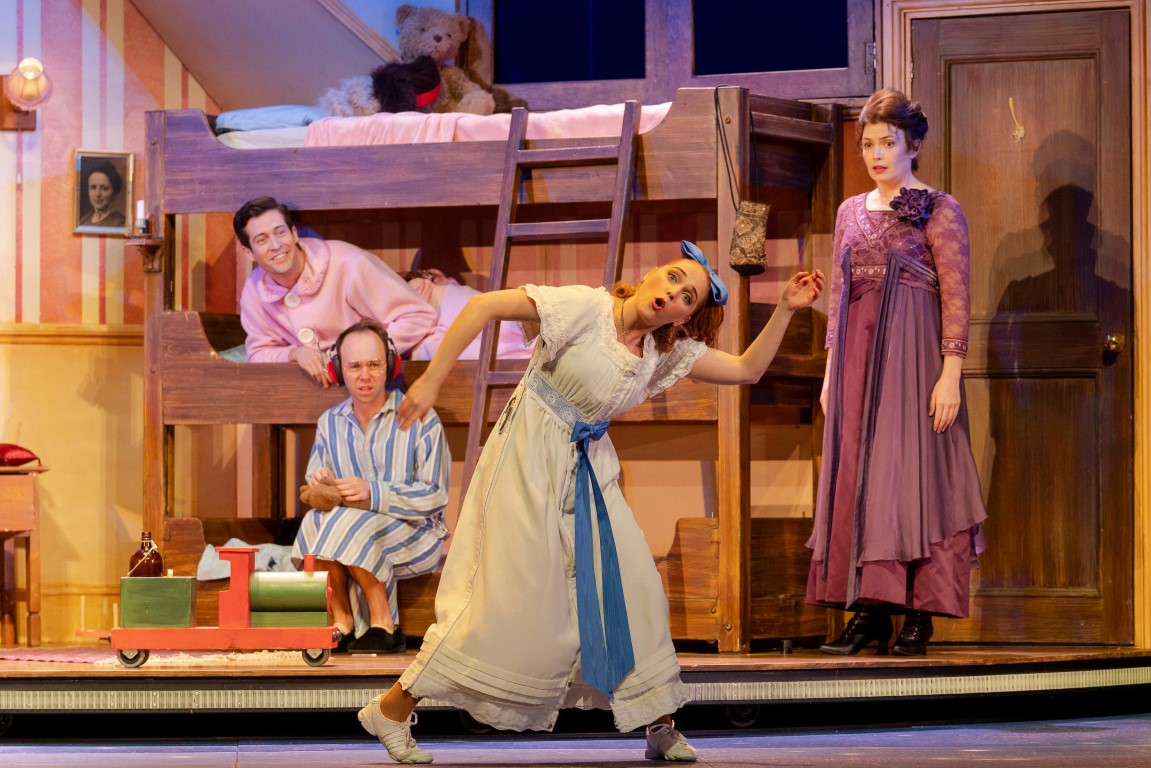 As the curtains were already up on the stage and none of the actors were ready in this faux production, the first scene showed Wendy’s bedroom in England that had a three tier bed with a large steam engine in the middle as two crew members quarreled on where it should be placed as it moved around the set until it was finally placed in its intended position. Then to compound the situation for our purposely dimwitted stage hands, an oversized extension cord was passed through the isle with the hep of the audience as it appeared they were anticipating electrical problems much to the laughter of the theatre goers. 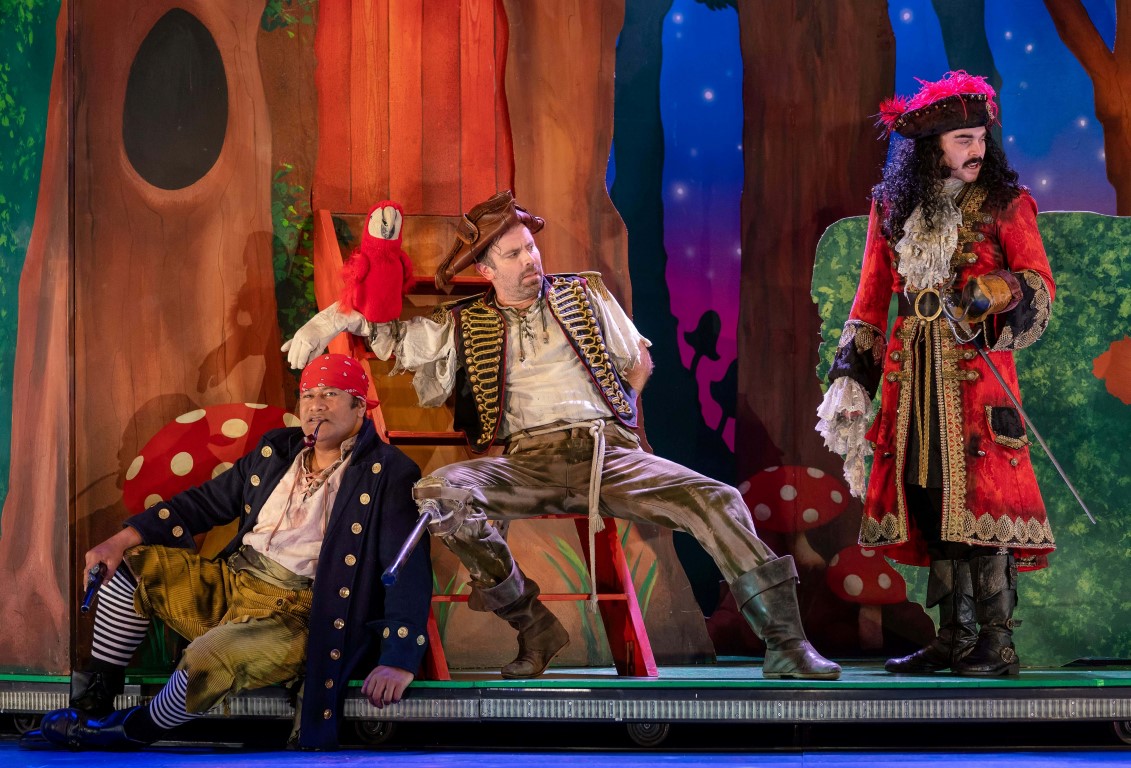 Finally the play started with the actors holding up the letters act one, which they had to sort out in the bedroom as the Mr and Mr Darling (Tammy Weller & Connor Crawford) were about to put their children to bed. It’s also hilarious that the children are played by grown adults as well, however Mrs Darling (Tammy Weller) was having trouble administering the medicine to one of the boys and eventually the children finally got into bed before one of them demanded his mother to tell a bedside story where she struct more problems. As she tried to turn the lights off, the problems commenced as one of the lights fell off the wall, the tier bed collapsed and the family dog (Luke Joslin) attempted to crawl through the doggy door, only to get stuck and required the stage hands to cut him out of the door as the entire Playhouse Theatre erupted into laughter. 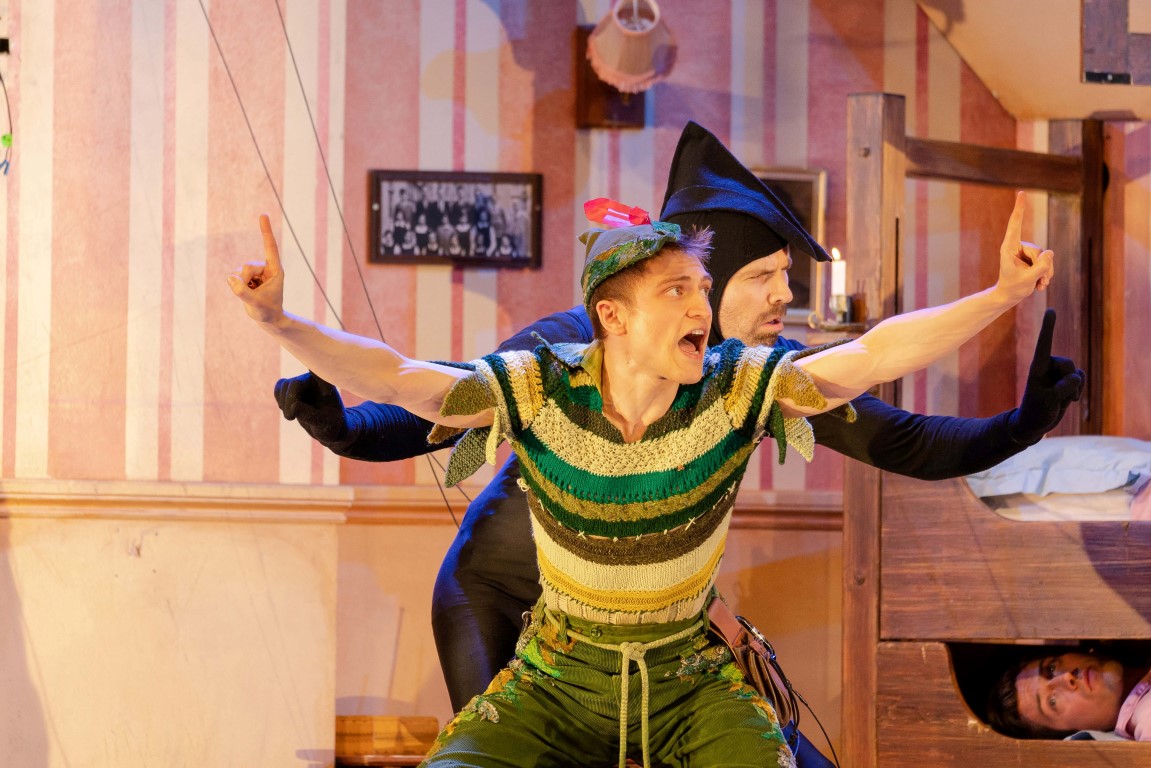 After the intermission, the actors once again held up the act two letters which like at the start were in the wrong order to get the audience into the spirit again.This time Peter Pan (Darcy Brown) appears through the open window in order to take the Darling children (Francine Cain, George Kemp & Jordan Prosser) to the wondrous world of Neverland as their adventure begins. One of the stops is at Mermaid’s Lagoon where they get involved with Tiger Lily (Tammy Weller) and of course some amusing fighting with the pirates and their leader Captain Hook (Connor Crawford) who lost his hand and unfortunately his ‘hook’ was improvised in this comedic play. 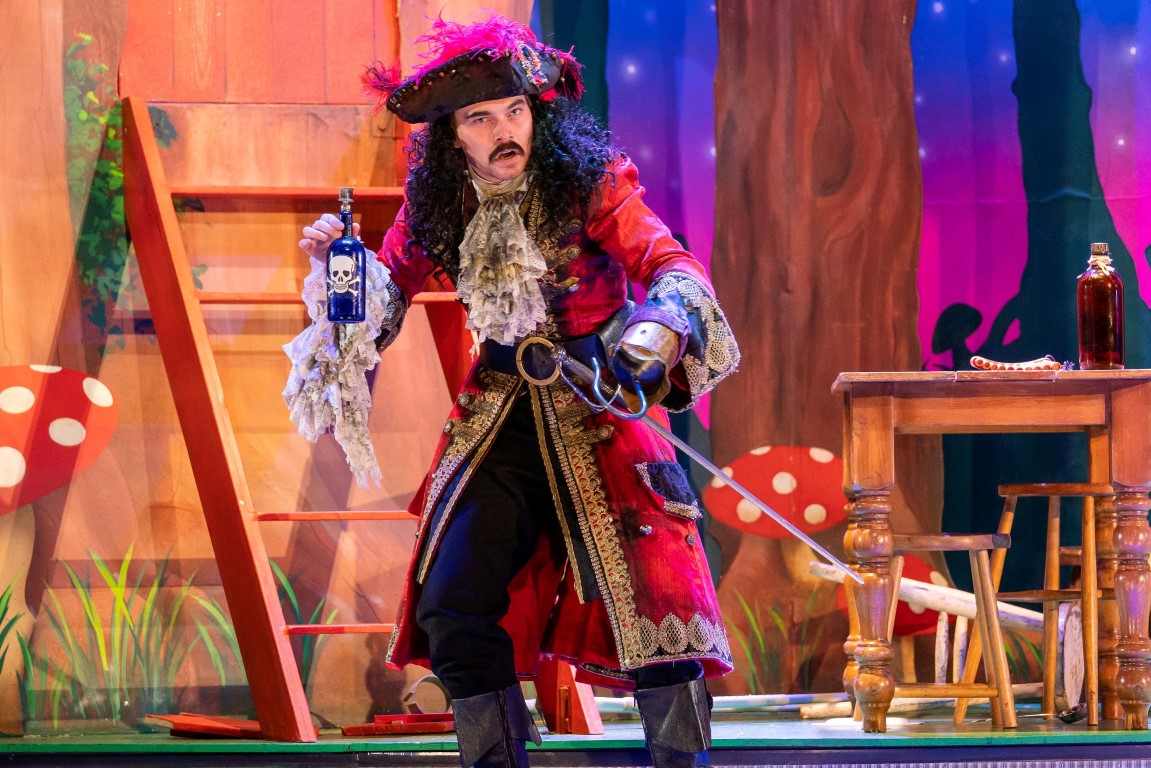 So when it was almost time for the Darling children to go back home, Wendy and the boys are captured by Captain Hook who poisons Peter’s medicine but Tinker Bell (Tammy Weller) drinks it instead, causing her near death but saving our hero to fight as he boards the ship of Hook in order to free his fellow Lost Boys. Needless to say, there is a huge battle between Peter and Captain Hook and although he is victorious and helps the Darling children home and into their bed, so are the Corlney Polytechnic Drama Society as they finish the night on a high.

Peter Pan Goes Wrong is a very funny and entertaining production that is filled with non-stop action and laughter that given premise (and without spoiling too much) is almost impossible to describe, however is an extremely well-produced play. Furthermore, the cast and ‘crew’ cannot be faulted, especially actor Jay Laga’aia who plays ‘Frances’ and like some of the other performances has a dual role of the narrator and Ceco. In the end, Peter Pan Goes Wrong is a very amusing play and if I had a chance to see it again I certainly would!