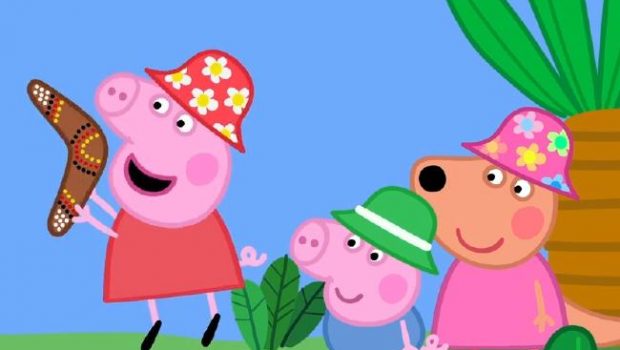 For the first time in her twelve year history, one of the world’s biggest and most-loved preschool stars, Peppa Pig, will make her big screen debut when PEPPA PIG MY FIRST CINEMA EXPERIENCE: PEPPA’S AUSTRALIAN HOLIDAY, opens in Australian cinemas nationally on March 16, 2017.

This special cinema event will feature nine brand new episodes, including four Australian episodes, along with interactive sing-a-long content, that will see young fans singing and dancing along in their seats with Peppa and her friends, during this hour of fun.

Not only will fans be treated to all new stories, characters and adventures, but the four Australian episodes will allow audiences to join Peppa on her first-ever Australian holiday – as she visits her friend Kylie Kangaroo and family. This exclusive four-part adventure sees Peppa visit the outback for a barbeque, learn to surf, throw a boomerang, and see the Great Barrier Reef in a submarine. Along the way, audiences will also get to meet Mr Lion, Mr Wallaby, a platypus and a koala. As well as the special Australian episodes, the five other brand new episodes will see Peppa take a trip to London, spend a day out at the Zoo, cruise along the canal, and get some advice from Policeman Panda.

Each of the nine brand new episodes will be connected with never-before-seen live action on-screen entertainment, so little ones can sing, dance, and play with Peppa, George and their new friends. This unique and exciting cinema event is the perfect first cinema experience for little ones, and of course, a must-see for all Peppa Pig fans!