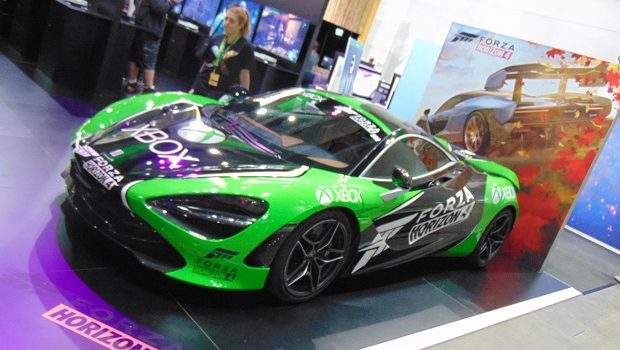 PAX 18 is finally here, the mood is hype and the crowds’ a plenty.  Everyone has been waiting for this since expo season began. The wait every year is agonizing but is it all worth it? Let’s get right down to it.

An early tour of the show floor saw me get access to some games before the masses came steamrolling through the doors. I took a walk around the setups and took a few snaps of the booths, then I sunk my teeth into playing some of the games on offer and there is quite a few this year. 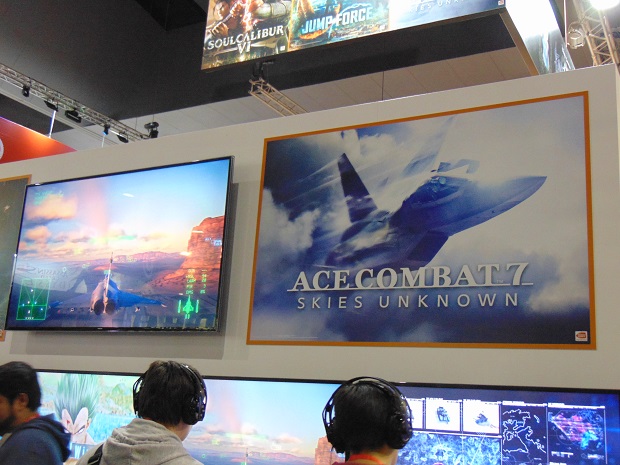 Oh man, have I been waiting for this. Several years since the last decent release of an Ace Combat game this new project has been teased for far too long, the cinematics are absolutely gorgeous, I cannot fanboy any harder. I didn’t even know it was going to be on display here at PAX but I’m oh so glad it was. I just couldn’t wait to try my hand at this demo. I was NOT disappointed, I changed the novice controls to the more familiar expert controls for me, being somewhat of an Ace Combat veteran. They are seamless. Smooth control input, no lag whatsoever, crystal clear picture (these TV’s were likely 4k) I was completely blown away by the sheer difference in quality, I never realised how big a gap there was between the standard HD and 4k, I only wish I had the money for a 4k TV now. Gameplay was true to good old Ace Combat style, this will please all the hardcore fanboys like myself. Mission styles are familiar, aircraft designs are so immaculate you’d have a tough time playing spot the difference. The demo was only about 8-10 minutes long so it went by so quickly, but I enjoyed every second of it. It was also nice to see just how much of a following it has here, even people with little interest in the series managed to enjoy the demo. I cannot wait for it’s release early next year.

Then a short walk away I saw TC’s Division 2, another title I’m keen on, so I jumped headlong into the demo. Fans will enjoy the similarly handling controls, the game feels very much as extension of the first installment except for the obvious story differences. Again, play is smooth and clean, transitioning between weapons during a fight is quick and easy, it can take a few vital seconds for newer players to get a grip on, as it’s quite different from the norm, but anyone who’s played Gears of War will be fine as it plays fairly similarly. The demo has you fighting waves of enemies in a co-op style play with three other players adjacent to you, there were four setups like this which meant that 16 people at one time could play the game in 4-player co-op, which was great to see, too many booths are small and wait times can get incredibly tedious, it was great to see how fast they were able to clear players. The location is a desolate, field of crashed planes in the middle of Washington DC, many players will remember this from the gameplay trailer, only this time now we get to play it ourselves. The difficulty is a lot more when you’re playing alone without other players to back you up, as I so learned in the late stages of my playthrough.  I only got to try the one class, but I’ve been made aware there are three, I was using the marksman class, as I usually prefer to engage from range. There’s a good balance between squishyness and dps I found with the marksman, with abilities to match. Definitely wanna get in and try the other classes. 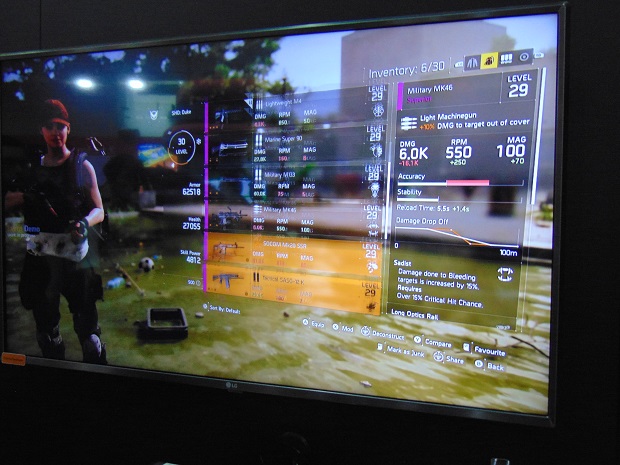 After than, I took a break from some of the games to attend a few panels;

Much like last year, the boys Tycho and Kris Straub were back on stage answering questions that viewers had sent in from around the world, some local ones too and a few dark humor questions as well. They tell us jokes and hilarious scenarios of their careers, full of witty one liners and wacky adventures along the way. It was a good, light hearted? panel to start with

Then, a brief stop over for some photos of some awesome cosplay in the gap to our next panel.

Xbox Presents: Gaming for Everyone

A panel presented by the Xbox Austrlia and New Zealand team about diversity in gamers, Indie Developer support, a bit of history about where Xbox began and the consoles released since its first inception, accessibility for impaired gamers and a presentation of some of the upcoming games. It was great to see Microsoft supporting Indie developers and taking a step towards accessibility for all kinds of players, be they the every day player, physically impaired or cognitively impaired. I won’t lie, I’m excited to get my hands on just some of the games presented, Forza Horizon 4, Ori and the Will of the Wisps (despite having never played the first, this game looks beautiful) just to name some of them.

Then it was back to the show floor for a few more games (Although I did get plenty distracted with some more amazing cosplay!); 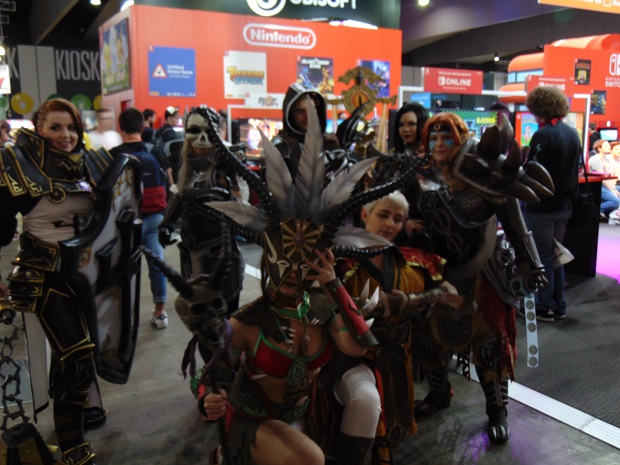 A racing game with the idea of Esports at its core, it’s an interesting racing concept that feels kinda like a classic pair from old PS1 era, Rollcage and Wipeout. Wipeout for it’s futuristic appearance and Rollcage for some of its mechanics (albeit the car itself can’t drive upside down), it features a gravity marker that points in the direction that gravity is flowing. It’s advised to stick to the outside of corners, otherwise you will come off the track in low gravity and fail spectacularly. There is a team mode I didn’t get to try as I was alone at the time of testing but the concept of the whole game is interesting. I’d definitely like to see the game a little more hashed out to see what other features they might include. Oh, did I mention you can drive on the roof? Yeah, pretty neato.

A game about Zombies, why wouldn’t you play it? This game is a little bit unique as you start the demo already infected. It’s a true survival-esqe game as you start with a handgun with not nearly enough ammo to eradicate a horde of zombies, and a rather crude section of piping as a melee weapon. You can scavenge from towns to help your settlement, as you travel your infection progresses granting certain extra abilities at the cost of days to your total life. There’s no current way in the demo to extend days of life as yet but the devs did mention the final version will have features like that. There’s a horde meter atop the screen that acts as a kind of beacon to zombies, it fills up slowly as you make noise, kill zombies etc, once full zombies continuously spawn in greater number and greater difficulty. So the emphasis is quickly, quietly, then get out. It’s in its early stages, but it has a lot of potential, I’d definitely like to see more. 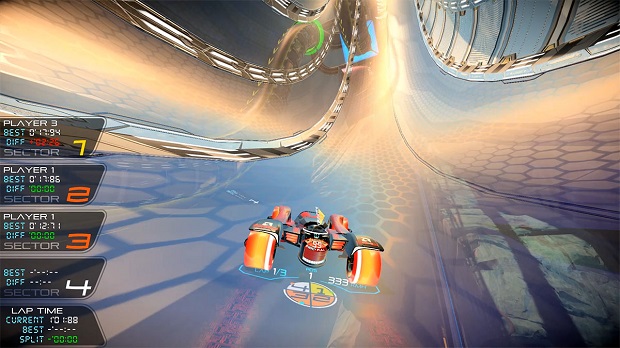 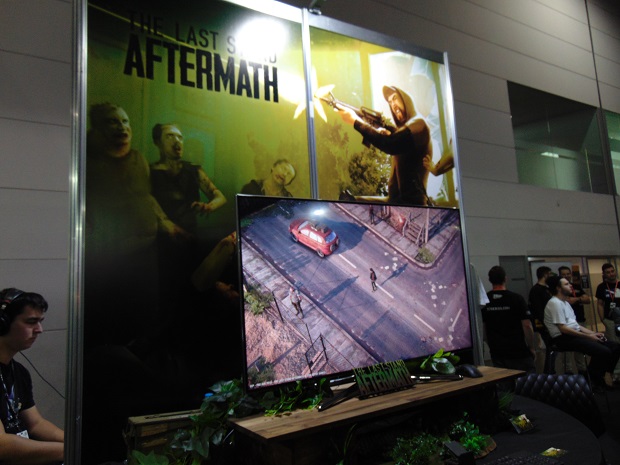 Finally our last stint of panels before finishing up for the day;

A panel about a terrible, terribly good video game. Duke Nukem Forever, a game that may never have come about. But would that have been such a bad thing? The game has always sit just a little wrong with me, oversexualising women, poor design and one liners that leave much to be desired. I admire it for being a shining example of what bad games are and what not to make, I admire it for its nostalgia of sorts, but it really wasn’t a game that gelled with me. It was interesting to hear some of the panelists take on the game as some enjoyed earlier Duke Nukem games whilst others, like myself, didn’t like it at all. All however found amusement in mocking its last official installment. Plenty of laughs were had as turds were thrown at enemies, naughty things were drawn on whiteboards etc. The best way to enjoy a such a terrible, terribly good game.

The live podcast returns for its fourth year running, the banter flowed, some game clips followed, a hilarious Metal Gear Solid: Snake Eater montage of climbing ladders. A panel with Kris Straub is always hilarious, I don’t know how he does it, his dark humour is on a level none could hope to reach. Wise cracked jokes, witty animation and even a bit of gameplay. Special guests Tripod came once more to play some music, an a capella to Snake Eater’s theme song and even an original cover, about Dungeons and Dragons. Truly an amusing podcast.

Then we got our real humour bone tingling as we hit up the comedy night. True dark humour like nothing before it. I can’t remember for the life of me who the comedians were as I’ve never heard of any of them. But boy do I wish I could, we arrived a bit later in the show but wished we could’ve been there on time. I was in stitches for most of the remainder of the show. So much so, that the last act from Filthy Casuals, a podcast of hilarious proportions, made me seriously interested to find and follow them to listen in on a few. It was the perfect end to a tiring first day of PAX18 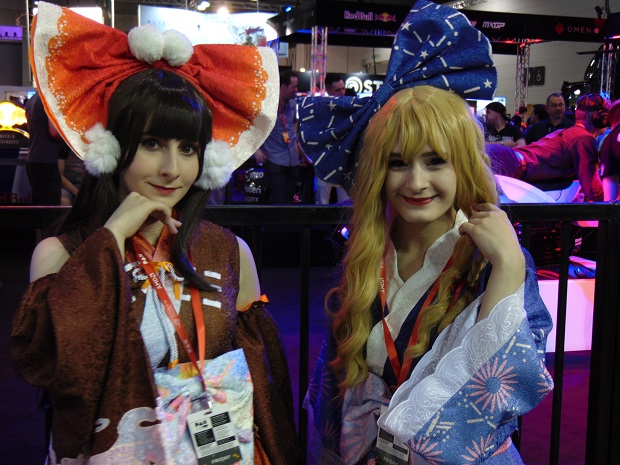 All in all, day one was super busy, but a very good start to the weekend as a whole, it’s only going to get busier tomorrow! I’d like to take a moment to thank all of the cosplayers and game devs that let me take snaps of them and publish them here, they’re amazingly talented and you should all check them out, please like, share and support the work of the excellent cosplayers featured in this piece and throughout the weekend as a whole as each daily summary comes out. The list of cosplayers featured in today’s piece can be found below, I thank them immensely for allowing the use of their photos for this article. Please also check out Melbourne Cosplay Community, NSW Cosplayers, Adelaide and Brisbane Cosplayer groups, of which many of these guys are a part of. As mentioned above please also check out the games I played too as they’re incredible and made by some of best local talent we have to offer, a list of these games can be found below as well.