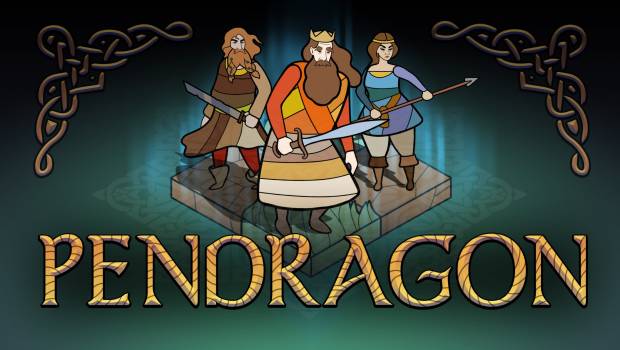 Pendragon Review – A Tale For The Ages

Summary: A delightful rogulike where you collect stories rather than powerups. Pendragon is a surprising look at the tales of King Arthur, but it's a little light on the strategic combat.

Inkle are well known for creating branching narrative adventures.  Last year’s Heaven’s Vault was praised for its narrative, and intricate looks at archeology and translations of language. 80 Days is still one of my favourite mobile games ever, crafting a fantastical adventure that wouldn’t’ be out of place in a Wes Anderson tale. Inkle knows how to make interactive stories, so how does their brand of branching adventure pair with a tactics game?

Pendragon is a turn-based strategy game set against the backdrop of the tale of King Arthur. Camelot has fallen, the knights of the round table have scattered to various corners of the dilapidated world, and King Arthur is on a suicide mission at Camlann to vanquish Sir Mordred and his oppressive forces. You are tasked to move across an ever sprawling map of Britain, moving from town to town, forest to marsh, trying to make it to Camlann in time to help your King survive and restore peace to the land. Whether you make it there in one piece however, that’s for the god’s to decide.

Pendragon is an interesting mashup of tactics, board games, roguelikes and narrative exploration. Everything in Pendragon has a decision and a reaction attached to it, and that begins from the very first moment you start a run. You will choose a character, which will determine where you begin on the map, and how the story will begin. From there you will make your way from location to location, sometimes fighting wolves and other beasties, other times talking to downtrodden villagers. At certain locations on the map you are likely to meet other knights, or occasionally peasants, who will happily join you on your quest to support the King. When will you rest? Will you eat your rations now, or save them for later? Will you suffer the loss of a character for the good of the party? Even if you manage to make it to the final moments, you will have to decide who goes into the final battle with Sir Mordred. Will it be King Arthur who faces off against his evil son? Or will a character who has traipsed across the ruins of Mordred’s destruction be the one to deliver the final blow? There’s always a decision to make, and while some are as simple as choosing to listen to a campfire story, others will hold real weight and change the entire feel of your run, and perhaps even set you up to fail.

There are a 9 heroes to choose from at the beginning of a run, including Arthur’s best friend Sir Lancelot, his wife Queen G, Morgana the Witch, the skilled archer Branwyn, and more. Many of them are locked off during your first run, and as you meet them along your unique playthrough they will be unlocked and added to the starting roster. Each of these characters are intertwined through their connection with Arthur, which means that particular parings may hold resentment towards one another, which will shape the decisions, morale, and dialogue. Others may hold romantic feelings. As someone who actually doesn’t know a huge amount about Arthurian lore, I was happy to see a nice summary explaining how each character fits into the world when clicking on their portrait in the beginning menu. These characters are full of emotion, and some of the truly tense moments between them felt more uncomfortable to the many battles I was facing on my runs through the game.

The encounters in Pendragon play out like a mini game of checkers. Each area on the map is presented as a board once you arrive. You hold the left most corner, and your objective is to make it to the right most corner in order to leave. You will only spawn one party member when the encounter starts, and if you leave your flagged entry point unguarded, an enemy can capture it and destroy your offside party members. Spawning your other members into the encounter will cost you Resolve, which you also use to perform special character abilities. Often times a single character can handle an encounter on their own, but if a sneaky spider were to slip right on by, chances are you’re probably not going to be very happy about it.

The other big part of the combat in Pendragon is the stances. The game allows you to move in a linear stance, or you can use a turn in order to switch into a diagonal stance that will allow you to jump around the map. Most hero character cannot attack in a diagonal stance however, and occasionally enemies such as spider can. This creates some interesting positional gymnastics where you need to try and circle your enemies effectively, hold positions strategically, and switch stances at just the right time to be able to attack safely. A single hit from an enemy will render a character out of commission for that encounter, so strategic placement is key to your success. It’s a significant change of pace from Xcom or Into the Breach, but it really matches the thoughtful narrative that is playing throughout with every action and allows the player to breathe and consider each move. 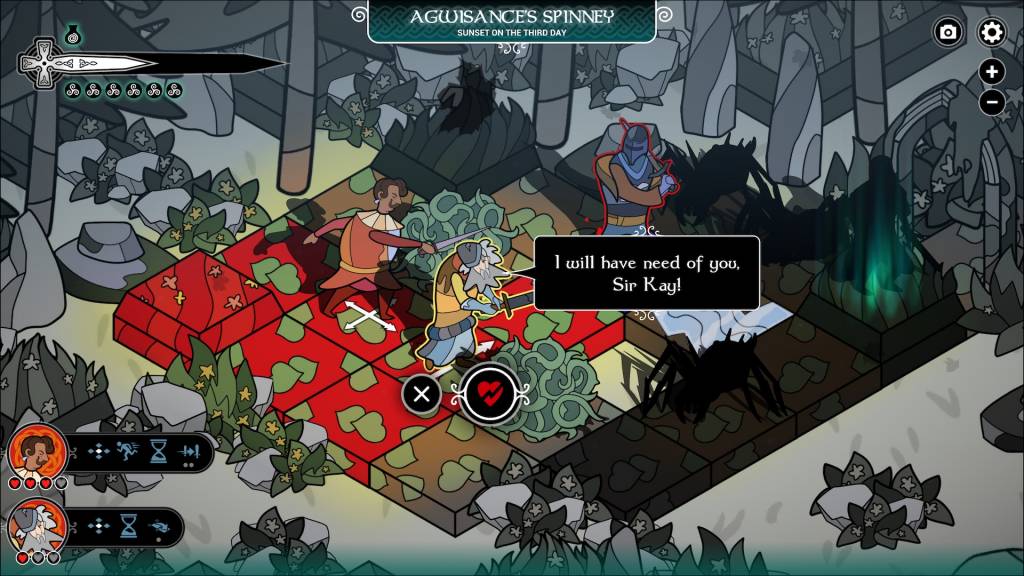 As expected from Inkle, the narrative is front and center for every single moment of Pendragon. Each movement you make will have an accompanying narrative flourish to add tension and drama. Characters will comment and consult with one another as they survey their surroundings. They will share stories as you traverse the overworld map from location to location. As you grow closer with these characters on each of your subsequent runs, you start to notice their flaws and vulnerabilities. You will pick up on nuanced resentment based on events that happened years before the game takes place. The tension that occasionally hits boiling point is genuinely frightful. Occasionally the events that unfold will lead to your character having an epiphany, or perhaps have them recede into a guilt fueled depression.  These events will actually unlock new special abilities for your characters, some of which offer exciting new tactical considerations, which are essential to your survival as you unlock the harder difficulties.

The best narrative moments that unfold in Pendragon were usually from my own doing. In my favorite run I started the adventure as Sir Lancelot whom had returned from France to save his best friend. The ferryman who delivered him to England decided to tag along, because he wanted to bop some of Sir Mordred’s knights on the noggin. Before long they met Sir Gawaine who Lancelot convinced to not eat rats and die alone, but to ride with him to support the true king. Then Lancelot died, a spider got through and wiped out some peasants and Queen Guinevere was gone before I could even curtsy. Gawaine met and fell in love with Branwyn, a song was sang, Gawaine told Arthur that no father should have to kill his son, and he went on to save the day by slaying his brother.

It was the decisions and my poor tactical form that led to this story. But it’s my story. One that took me to many places, introduced me to many people, and was mostly different from every other run I’ve played in the game. I say mostly because there are some scenes that are static. The beginning will always be the same for each character you choose – Lancelot will always be at the docks, Branwyn will always be in the forest, but from there it is up to you in order to choose your path towards Camlynn, and there’s so much narrative here to uncover that even if you’ve seen something before, it feels like it belongs right there in that moment. 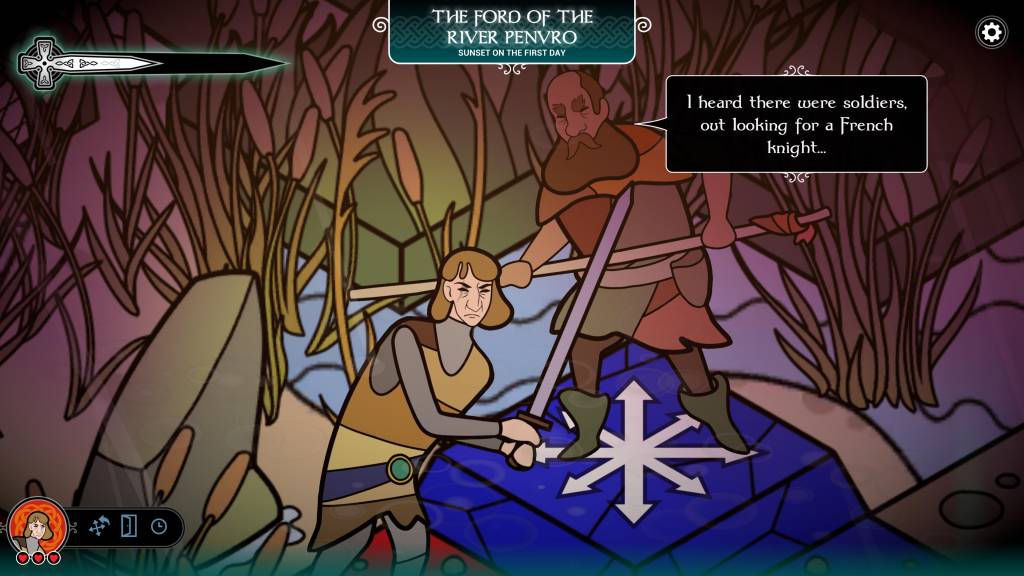 The other battle that is always static is Camlynn. You will begin the fight as King Arthur, and then whoever is in your party at the time will arrive on their steeds to join in the fight. Once you clear the board, or make it to the right corner, you will choose whether Arthur faces off against his son, or your party leader. The outcome is always the same – a one on one battle with the power hungry Mordred until only one remains. The only difference is the conversation that plays out in this battle. It’s interesting to see how each character delivers their condemnation upon their enemy, but otherwise it will always yield a similar result. The climactic battle isn’t actually that hard, however the battlefield is a fair bit smaller than a regular board, so positioning and patience is more important than ever. I wish it had a little more to it, but there’s also something bittersweet about the events that take place on your struggle to make it to that very moment holding more weight than the final battle.

I really enjoyed Pendragon, but I think it’s biggest hurdle to overcome will be its difficulty. A run will take roughly an hour, and I managed to complete the game at its default difficulty on my second attempt. Each successful run will unlock a higher difficulty option, which makes encounters harder, and rations less readily available. The morale meter will come into play more here, and there’s a little bit more to consider if you want a healthy  lively party by the end of it. But if you’re playing Pendragon with the hope of it being a hardcore tactics game, I really think you’re missing the point. Pendragon is this delightful little roguelike, where instead of powers and upgrades, you’re unlocking stories and adventure on each run, and personally I found that to be pretty great.

If you’ve ever enjoyed Inkle’s games in the past, I think you’ll find something to like about Pendragon. Its flat art style, delightful music, and surprising tactical depth mix well to spin a tale that you’ll remember long after you put it down. However if you’re looking for your next tactical challenge, this won’t be fore you. Pendragon is definitely more about the journey, and oh what a journey it is.