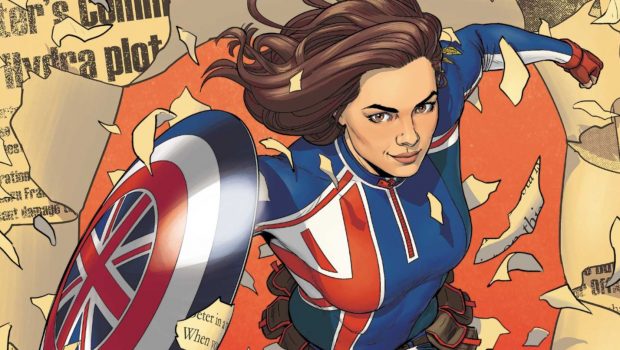 Captain Carter, the fan-favorite character recently featured in Marvel Studios’ What If reports for duty in her very own comic series next month! Prolific creator Jamie McKelvie, known for his defining work on characters like Captain Marvel and the Young Avengers, now uses his acclaimed talents to bring this Marvel super hero to the forefront of Marvel Comics canon, writing the series and designing the character’s brand-new look. McKelvie will be joined by rising star artist Marika Cresta, known for her recent work on STAR WARS: DOCTOR APHRA. The five-issue limited series will introduce this World War II hero in an adventure that will find Peggy Carter as a woman out of time, facing the reappearance of an old foe in modern day and deciding what she stands for as the wielder of the shield. Get your first look at the action in the all-new CAPTAIN CARTER trailer, featuring never-before-seen artwork.

“There’s a whole load of story meat in the premise that interests me,” McKelvie told SYFY WIRE. “It’s almost 80 years since the end of World War II. That’s a big difference to the 20 years Steve Rogers was in the ice in the original comics timeline. It’s a huge gap, and so much has changed since then. Even the decade since MCU Cap woke up has seen a lot of big shifts in the world. So that’s immediately exciting to me –– how do you deal with waking up in such a radically different world, with every anchor in your life long gone?”