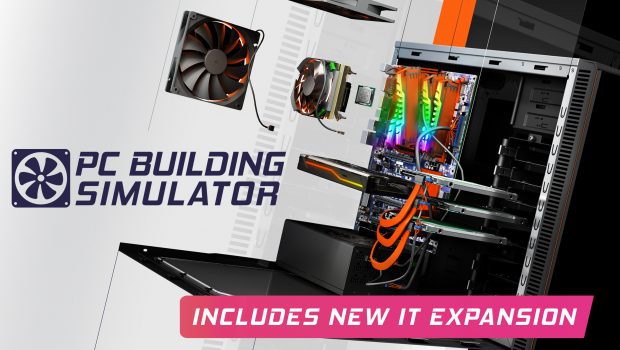 Summary: This game is jam packed filled with content and is a terrific sim if you're keen on those types of games. It's also a great learning tool for those who are looking to get into PC building or those who just love PC building already.

Simulator games have become an overcrowded genre in recent years, with plenty of rushed out bloat made to be flavour of the month despite launching as an unfinished product. It’s safe to say that PC Building Simulator 2 is an exception to this, as it improves on its previous entry in countless ways.

With a new story mode to help serve as a tutorial on building PC’s, and an incredible attention to detail, there’s more to this game than having to make your own fun.

In the game, you start off repairing your family business of PC building (it’s a metaphor you see). In the game you are taught how to build and repair PCs in excruciating detail from aligning screws, to stress testing overclock features, to toggling BIOS features. Of course, what makes this gimmick so interesting is that learning in the game translates to real life. PC building is a complex and difficult hobby. Personally, for my first PC build, I probably wasted nearly $500 on incompatible parts for my build. Stuff like buying an Intel CPU with a motherboard and RAM only compatible with AMD hardware.

That’s where the game’s Free Play game mode comes in. This mode allows you to stress test and play around with different builds, guiding you through the process on how to build it yourself outside of the game. This used to be something you could only verify through PC Part Picker, but even that website makes the process incredibly to select all the individual parts. It also doesn’t always communicate where your build is going wrong in an obvious way. This game does a better job of showing you the more ins and outs on where your PC build could go wrong. Of course if you’re having any doubts about your potential build, it’s always best to check with a professional first before investment countless dollars into parts. 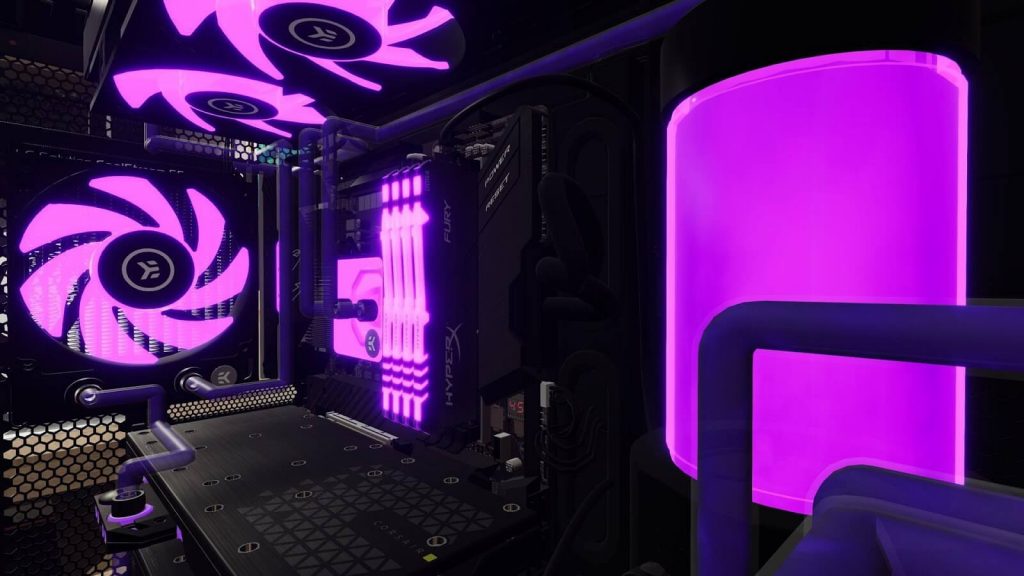 There’s a huge range of official brands on board, such as NVIDIA, Corsair, Intel, Ryzen even Thermal Grizzly paste. It’s this integration of real life brands instead of awkwardly named knock-offs that really helps this game feel like a legitimate simulator. I found this to be extremely immersive as this feature made it easier to buy into the simulator aspect of the game, as fake names in this instance I would feel to be too jarring and maybe too ironically memey and self-referential also.

The career mode in the game is around 30 hours long, which on top of the free play mode is insane value of $28.95 is pretty good. While I’ve been mostly treating this game as a simulator to learn PC building, it’s also a pretty good PC repair shop sim as well. The gameplay loop of the career mode is that you’ll receive an email of a client asking you to fix their PC in a specific way. After accepting the PC will be delivered to you in a day’s time, giving you a chance to order the new parts and prep. It’s a very simple, yet rewarding gameplay loop personally. Over the course of the game, this will get more complex, and the client’s requirements will only continue to increase.

The graphics are pretty standard for your simulator games; colourful, bright but nothing extraordinary. What helps the game’s graphics really stand out in comparison to other simulators, is the dedication to detailing the wide variety of hardware available. From specific brands of GPUs to, types of piping you can use for your water cooling, even the thermal paste you use can be unique. You’ll spend a lot of your time staring at PCs and the insides of them, so the graphics everywhere else being a bit lackluster totally makes up for this. 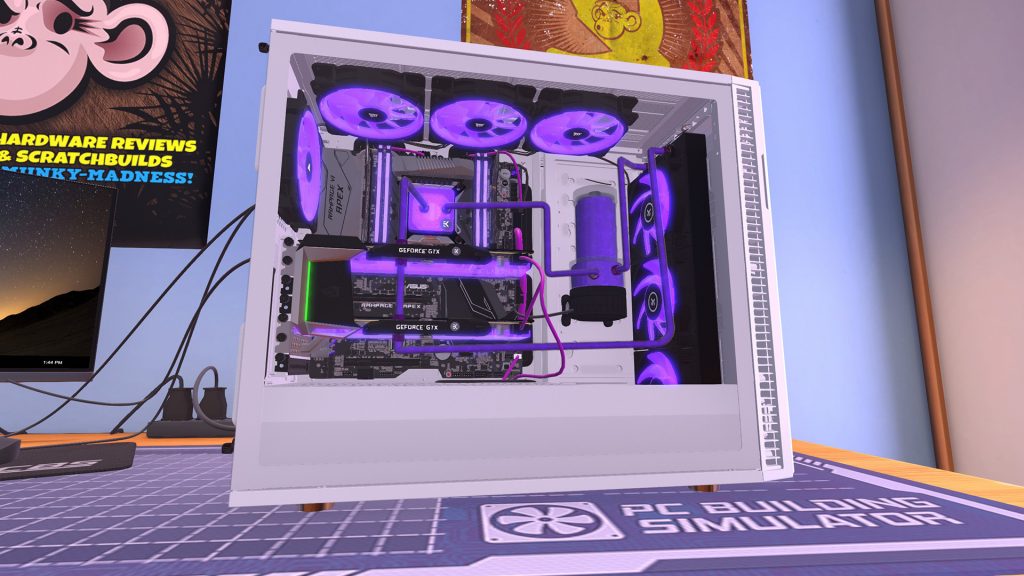 A serious gripe I have with the game is the music. When I first loaded in, the game was blasting with music. It wasn’t atmospheric or anything, you’re just hit with this wave of Kevin Macleod sounding rock music. After going into the settings and switching it off I saw that the artist was Gavin Harrison and I thought “The drummer from Porcupine Tree?? That’s so cool what”. Of course, this Gavin Harrison is not the same and after three songs I was let down. In saying that though, the soundtrack does have some pretty good songs on it. It’s a varied mix of Pop, Rock, IDM and Disco music, which will give you a chance to pick what you want to vibe out to while assembling the PC. But because it’s so varied, I couldn’t help but just associate it with standard stock music.

This game is jam packed filled with content and is a terrific sim if you’re keen on those types of games. It’s also a great learning tool for those who are looking to get into PC building or those who just love PC building already. I only noticed minor bugs, but nothing intrusive in my entire play-through, which is very unlike a sim game.