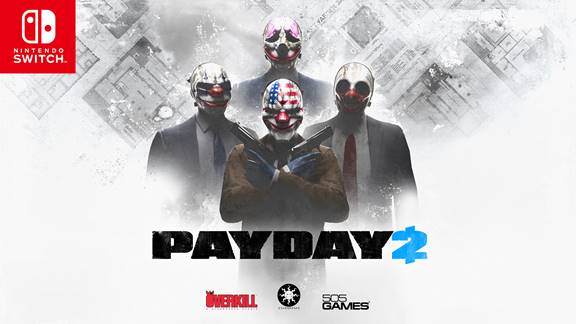 PAYDAY 2™ coming to the Nintendo Switch System in February

PAYDAY 2 is set to release on February 23rd in Europe and Australia and February 27th in North and South America. This is the first time ever that PAYDAY 2 will be available on a Nintendo console – both digitally and through physical distribution on cartridge by 505 Games.

With more than 5.4 million community members on the main PC digital distribution platform Steam, PAYDAY 2 have had more than 160 paid and free updates since its release in 2013. First launched in 2011, PAYDAY is a cooperative first-person shooter computer and video game franchise with more than 16 million units sold on PC, SteamOS, PlayStation 3, Xbox 360, PlayStation™ 4 and Xbox One, soon coming to the Nintendo Switch system. PAYDAY 2 VR is now also available in beta for HTC Vive and other headsets on Steam.