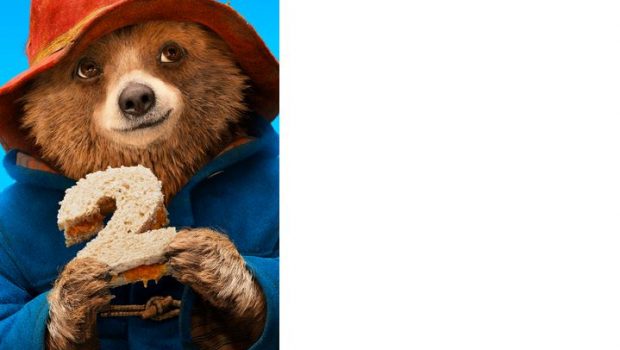 The much-anticipated sequel to the worldwide hit family film finds Paddington happily settled with the Brown family in Windsor Gardens, where he has become a popular member of the community, spreading joy and marmalade wherever he goes. While searching for the perfect present for his beloved Aunt Lucy’s hundredth birthday, Paddington spots a unique pop-up book in Mr. Gruber’s antique shop, and embarks upon a series of odd jobs to buy it. But when the book is stolen, it’s up to Paddington and the Browns to unmask the thief…

Hugh Grant plays Windsor Gardens’ local celebrity, PHOENIX BUCHANAN, a vain, charming acting legend whose star has fallen somewhat in recent years. Grant is a Golden Globe and BAFTA winner, best known for his memorable performances in films like LOVE ACTUALLY and ABOUT A BOY, and was most recently seen in the critically acclaimed Stephen Frears comedy drama FLORENCE FOSTER JENKINS opposite Meryl Streep.

Brendan Gleeson plays “KNUCKLES” MCGINTY, a notorious safe-cracker and legendary strongman who becomes an unexpected new ally for Paddington. Gleeson received an Emmy award for his portrayal of ‘Winston Churchill’ in HBO’s ‘INTO THE STORM’, and a Golden Globe nomination for IN BRUGES. Other recent credits include the HARRY POTTER series, EDGE OF TOMORROW and CALVARY. Upcoming features include Ben Affleck’s LIVE BY NIGHT, ASSASSIN’S CREED, ALONE IN BERLIN opposite Diane Keaton and TRESPASS AGAINST US opposite Michael Fassbender.

A Heyday Films and STUDIOCANAL production, Paddington’s return to the big screen is helmed by BAFTA nominated director Paul King (PADDINGTON, COME FLY WITH ME, THE MIGHTY BOOSH), written by Paul King and Simon Farnaby (PADDINGTON, YONDERLAND and the forthcoming MINDHORN).

Paddington 2 is produced by multi award-winning David Heyman (producer of all eight of the HARRY POTTER films, GRAVITY, THE BOY IN THE STRIPED PYJAMAS, FANTASTIC BEASTS AND WHERE TO FIND THEM).

Paul King and David Heyman comment, “It has been a complete joy to return to the world of Paddington. It was such a delight to see his first big screen adventure embraced by audiences around the world, and I couldn’t be more excited about Hugh and Brendan joining the cast to bring his next outing to life. Together, I hope we can make a film worthy of this most exceptional of bears.” Paul King

“I am thrilled to be back in the warm embrace of Paddington Bear, again under the inspired direction of Paul King. And I’m delighted to welcome Hugh and Brendan to our exceptional cast.” David Heyman.

With Ron Halpern, EVP of International Productions and Acquisitions for STUDIOCANAL, adding, “PADDINGTON is such a beloved film for all of us at STUDIOCANAL. There really is nothing which could make us all happier than to be back with Paul King, David Heyman and this wonderful cast to begin a new PADDINGTON adventure.”

STUDIOCANAL developed the film, is fully financing and will distribute in Australia, New Zealand, the UK, France, and Germany, and is handling international sales.

PADDINGTON 2 is based on the best-selling and internationally adored series of children’s stories by British author Michael Bond.