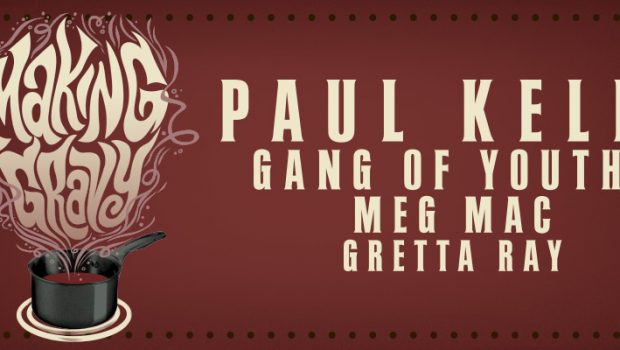 “Gravy’s been around a long, long time. Maybe humans came up with it even before they came up with beer and wine. I don’t know. But I do know Raymond Carver wrote a poem about it. And I like to make it. And it’s different all over the world. So, we’d like to usher in Christmas and all things grave and gravilicious with a rich, musical stew. Come on board the gravy train with us and our friends this December 16th at The Myer Music Bowl.”
– Paul Kelly

In 1996, Paul was asked to contribute a song to a charity record, ‘The Spirit Of Christmas’. When he was told that the song he had chosen was already taken, he decided to write his own. An unlikely Australian Christmas classic was born – ‘How To Make Gravy’ – it’s over five minutes long, has no chorus, and is set in jail.

Over the last 21 years the song has grown to become a true Christmas anthem, and amongst Paul’s fans, the 21st of December has become known as ‘Gravy Day’, and even a #putyourgravyout movement started last year.

So Making Gravy now has Paul putting his gravy out. Watch a special Christmas Gravy and Mash.

Adding sweetness and that extra tang to the Making Gravy line-up will be special guests Gang Of Youths, Meg Mac and Gretta Ray.

Sydney band Gang of Youths won hearts across the country yet again with the release of their sophomore album Go Farther In Lightness earlier this year, perfecting the balance of raw and cathartic lyrics with rousing melodies.

Gretta Ray made her entrance onto the local music scene with the release of her debut EP Elsewhere last year. Delivering impeccable songwriting alongside impressive vocal talent, Ray has firmly established herself as an artist to watch.

Tickets to Making Gravy go on sale from Wednesday 1 November, with a Frontier Members Pre-Sale beginning on Monday 30 October. Don’t get burnt by missing out.