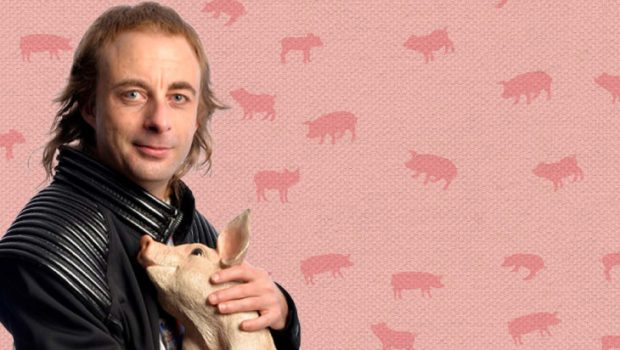 Summary: Paul Foot’s Tis a Pity She’s a Piglet is a must see show at the Melbourne International Comedy Festival!

(Warning: Oxygen or Asthma Inhalers may be required)

The delightful Mr. Paul Foot returns to the Melbourne International Comedy Festival (MICF) for 2017 with his brand-new show Tis a Pity She’s a Piglet which is filled with some strange (or as Paul calls it surreal) humour and clever wordsmithing. Like his previous shows, Paul establishes a rapport with the audience very early on as his quirky humour spreads across The Famous Spiegeltent (Arts Centre Melbourne) like some pandemic comedy infection.

Although there are no real piglets in the show, there is actually a monkey (no… not a real one but one called Johnny) who stars in one of his skits, not to mention some truly funny audience participation and my friend and I fell victim at one stage. So for those that like sitting in the front, second, third and even fourth row, you have been warned. Of course, it’s all harmless fun and being included in a Paul Foot joke just makes the experience of Tis a Pity She’s a Piglet even more entertaining and something to cross off my bucket list. He even joked that after mounting an audience member that his manager forbid him to engage in this activity. It’s classic Paul Foot, especially when his 9-word disturbances (or art) comes out.

Part of Paul’s charm is the way he joins words or unrelated subjects that somehow come together in some truly hilarious ways. This may include things from both fiction and non-fiction as the master magician of comedy spins his amusing tales, some with double meanings that will make you laugh and at times cry from the craziness of his wit. So whether he’s taking the piss out of a country or the audience, you may laugh and then realise that you’re actually part of the joke or his tale.

From a story of a couple on holidays who have been married too long to the story of a bigoted Spider-Man and even how Australia is up their with countries such as Iran and Iraq who don’t allow gay marriage, you’ll be amazed and bedazzled by his clever comedy. With that said, Paul’s social commentary on the world is spot on and whether it’s a gag about a wannabe terrorist and his 72 virgins, the craziness of Oscar Pistorius or how abysmal school is, not to mention the cons of a boys only school, Tis a Pity She’s a Piglet is pure comedy gold that will add wrinkles to your face from all the healthy laughter.

If I could only see two comedians at the Melbourne International Comedy Festival, one of these would be Paul Foot. From the very first moment he steps onto stage and hear his voice, you automatically start smiling and within minutes, you’ll be laughing at his bizarre craziness as this comedian dances with the audience in truly spectacular fashion… Bravo Mr. Foot, Bravo!