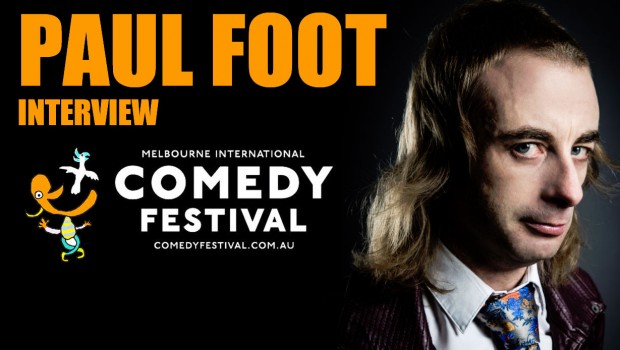 Welcome back to Impulse Gamer Paul and are you bringing your “disturbances” back to Melbourne Australia?

Ah yes, Impulse Gamer, I remember you well. I am bringing my new show to Melbourne called Hovercraft Symphony in Gammon Sharp Major. There aren’t any Disturbances as such within the show this year, but there are disturbing pieces of humour, such as a woman whose life is controlled by snakes, and a Hindu gentleman who takes far too many risks.

Last time we spoke you were compiling a personal photographic archive of the weirdest looking trees in the world… how’s that been for you?

I’ve moved on to heirloom tomatoes actually. Photography is a very fast-paced industry and I have a non-existent status to protect.

What country has the weirdest tree located in and what does it look like?

Why would I know that? I’m not interested, trees are last year, get over it Impulse Gamer! I could make up a lie for you though, no problem, er… weirdest tree.. that would be the Turbo Fig Bannatyne in Bolivia. What does it look like? Well turbos really. People think Bolivia make a trade out of fake Brazil nuts, but they make an even bigger trade selling dud turbos to Russia, they’re just a load of fig trees!

So tell us a little about your new show, Paul Foot: Hovercraft Symphony in Gammon # Major?

Yes, well the title has nothing to do with the show, which is insanity, starting off gently and then revving up. It is a piccolo session with a twist, except there’s no piccolo, just a tarty fridgecake.

Will we see a hovercraft in your show?

Ideas that hover, and a lot of craft, but an actual hovercraft – what do you think? It’s not a hovercraft though is it, it’s a hovercraft symphony.

Last time in Melbourne, you picked a volunteer from the audience to help demonstrate where gay babies come from… do you have any more devious plans like this?

There are devious plans yes, but I only select people who are totally up for it, you can feel their energy from the stage. My audience expect it of me now. They love it!

I also got to hold your jacket last year during your show, does that make me special?

Does the words Pied Piper of Buckinghamshire mean anything to you?

I have not heard that phrase before, though I am familiar with its components. The Pied Piper is a strange gentleman with a flute who stole rats and children ‘cos he never got paid. He took no prisoners baybayyy! Well, proverbially speaking – in actuality he did take prisoners. Loads of prisoners. And Buckinghamshire is where I live in England. There are no pipers there. And if there were, people would pay them for their piping services.

What about fauna and canines?

I’ve never been to the canines, my manager hasn’t sorted me out with any show there. I know all about fauna though. I have a fauna next to my steam room. Cold shower, and then go and sit in the fauna and sweat it out.

What else can we see in Hovercraft Symphony in Gammon # Major?

I could relay the entire show to you word-by-word and action-by-action if you like? Actually, I’m going to eat a jacket potato, I’m not your SLAVE.

Also Paul, how do you come up with your new shows?

I go on writing retreats to all sorts of interesting places. A lighthouse, a cottage in the middle of a forest, an apartment in Tokyo. I’m not even joking. I  keep meaning to put an illustrated map on my websyte, my Connoisseurs would like that.

You’re quite proactive in the Twitterverse Paul and with another 6,000 fans, you’ll reach 50,000 followers. Apparently not even some of the gods of ye oldie days had that many followers so my question to you Mr. Foot, will this make you some kind of god?

If you do become a god, what will your first task be?

To stop men growing beards. Just get over the beard. It’s not working for you! You’re not Charles Darwin babe, you’re some bloke who works over there. Shave your face!

I remember being asked this some years ago, and I said it’s nice to look at my Connoisseurs’ tiny little faces. I think that’s still partly true. Also it’s a cheap way to sell tickets.

You’re also not afraid to say it how it is… is that good or bad for Twitter?

I love my Film Pitch video with Rhys Mitchell, he is very talented and our timing works wonderfully together I think. Yes there will be more!

Do you think we’ll see more of your broom and bouncing ball?

Sometimes in this current show you get to see the groom and bouncing balls. It’s his wedding day, it’s so embarrassing.

Which comedians inspire you?

You definitely asked me this before! I like Tommy Cooper, Angela Lansbury, the Buddha, news readers are often quite good. In England I like Brian Gittins and my support act Malcolm Head who I hand-picked from a fruit stall.

So why do you like the Melbourne International Comedy Festival?

Everyone is very friendly in Melbourne, the attitude towards life is much more fluid and relaxed, and the audiences are genuinely enthusiastic. English audiences sometimes try their hardest to be unimpressed, which has never phased me – I just sock it to them and send them home crying.

In your down time besides taking photos of trees, how does Paul Foot relax?

I like to paint, I like to watch video recordings of horsey races, I like to cook myself nice meals and I faff about on my phone. I also enjoy swimming in the oceans of the world. But I never have down time, because I am always thinking of comedy. It is my job and my hobby and my wife.

Lastly, why should we see Paul Foot: Hovercraft Symphony in Gammon # Major?

Because once it’s gone it’s gone forever, the show will set sail into oblivion and when you see me next year it’ll be something else.

To learn more about Paul Foot, please visit – http://www.paulfoot.tv/ or to see his new show in Melbourne, visit http://www.comedyfestival.com.au/2015/season/shows/hovercraft-symphony-in-gammon-major-paul-foot