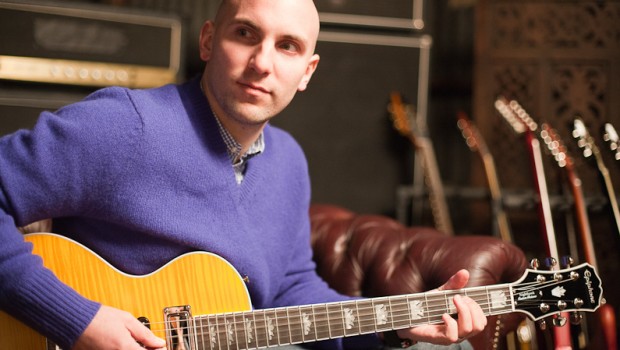 Paul Cross commanding the Good Rock ship Rocksmith and Rocksmith 2014 for Ubisoft takes time to answer some questions about Rocksmith 2014.  Paul gives us some titillating tidbits and hints of things to come for Rocksmith 2014. Edwin Millheim, United States Editor for Impulse Gamer deals the questions.

Hailing from the UK, Paul Cross was Lead Designer at Criterion Games on titles such as Burnout 3: Takedown and Burnout Revenge, before 18 months in the USA and Canada consulting for EA on Medal of Honor, Need For Speed and Skate, then moving to Ubisoft in 2007 to head up the game design group notably working with Grasshopper Manufacture on No More Heroes 2: Desperate Struggle before becoming Creative Director at Studio SF who’s first title is Rocksmith.

Edwin:  Everyone I have spoken to from Ubisoft, and when I have seen Ubisoft reps speak to others (not just speaking to the press) has displayed tremendous enthusiasm about Rocksmith 2014. It’s so genuine, how does that make you feel?

Paul: It’s so different – Ubi makes incredible games, adventures to foreign lands, party games, stealth, war… but there’s never been anything quite like Rocksmith.  So many people dreamt of a “game” like it, but never really thought it could be done, but now those same people are playing songs on a real guitar, jamming with session mode or just having fun playing in the Guitarcade – I’m one of those people!  Even on the team we see guys improving their guitar skills day to day – it’s such an amazing feeling, especially when you’ve tried other methods and failed to get very far.

Edwin: We know how time-consuming note tracking can be, thanks to the behind-the-scenes look we all got. Even with RS2014’s already huge library of songs available, with players it’s all about that next song… It’s like an addiction. If you can answer, how far ahead is Ubisoft trying to be with any new DLC for Rocksmith 2014?

Paul: Yeah, it takes about 2 weeks per song… so multiply that by hundreds of songs and that’s a lot of man hours!  (Not including testing/prepping for release).  We’re trying to plan 2 years ahead – Rocksmith 2014 is planned to be a long term product.  Learning the guitar takes time and effort, even the fastest way, so our ever expanding library will bring enough variety and quality music to keep people engaged.

We have a giant list of well over 1000 songs that we’re going through, judging commercial viability, playability (fun!) and popularity.  It’s a little easier for us now because we have data from what sold well on RS1.

Edwin: Rocksmith 2014 seems to be embracing the learning side of the software

— even more than the first Rocksmith. How difficult was it to keep it fun, too?

Paul: During development of RS1 and 2014, Laurent Detoc (President of Ubi SF) would come to the office and say to me “your game is not fun enough” (he has a French accent so you have to imagine it).  Sometimes that was a little frustrating because yes, this is learning software, we’re trying to make it as painless as possible; in Rocksmith 1 we had long load times, awkward menus and hidden features – that stopped it being as fun as the actual gameplay should be, RS2014 “fixes” those issues and adds some truly fun modes – Guitarcade is vastly better, instant riff repeater removes all the barriers for practicing, the menus are super-fast, there’s “no” loading, Score Attack gives true challenge and then there’s Session Mode!

Edwin: How long can the process be for licensing a song for the game, and now that more artists/bands know it’s with REAL guitars and REAL music, has this made it easier to approach artist/band management?

Paul: How long is a piece of string!?  The great thing for us is that now we’re getting in with bands because their children are playing the game!  I can’t say who but one of the top bands agreed to be part of Rocksmith because their son was given a copy or RS1 by their record company and said to their rather famous Dad “you should be in this”.  I find it quite fun to imagine these rockstars being told by their kids to do things.

Edwin: I know how PR likes to keep things under their hat ’till the right time. Without giving it away — unless you are able — in regards to artist, is there a white whale you’re after? Or have you caught them already?

Paul: So, some of those artists (without naming any!) had exclusive contracts with some of the rhythm games.  So maybe next year we’ll see a few more.  Iron Maiden was super exciting for us – The Trooper is a monster track and we have a 5-pack of dlc joining that.  Being an Englishman I was rather chuffed to get Oasis on the disk… would love some more!  Did you know that Wonderwall requires a capo?  Did you know that RS2014 supports capos?  Yeah…  I have a call to make ;-)

Edwin: Swinging back to the teaching side of things. Did you consult guitar teachers about a curriculum, or was it like, “Oh we know we want to teach this” …how did you know where to implement each teaching part in the game?

Paul: We have many musicians and guitar teachers on the team.  The learning method was born out of long conversations with them and our experiences with trying to play Rock Band 2 competitively.  Dynamic Difficulty is really the key – that is the special sauce in my opinion.  It stops it from being boring, it challenges you steadily and now you can set your own starting levels; it’s bloody brilliant (even if I do say so myself!).  When you play Score Attack and it’s on Easy and you’re hitting all the notes right and it doesn’t change for 5 minutes it’s a great reminder why Dynamic Difficulty is magic.

For RS1 the idea of rehearse and then perform was built to give people a goal to try and get them to play a few songs at low levels before attempting new songs at low levels, steadily increasing the difficulty before attempting early/easy songs at their higher levels.  We ditched this because we found that a vast majority of our users were just picking a song they wanted to learn and then grinding to get it to the highest level… and they’d do it!  Our Lead Audio Designer Nicholas Bonardi once said “we’re creating monsters” because of the speed at which you could learn to play a song from Rocksmith.  In all their years teaching guitar, our teachers had never seen people progress so fast.  Nick said “people are able to play songs at a much higher standard than they’re able to play the guitar”.  I thought this was fascinating – because they ARE playing the guitar, they’re using the instrument to make the sounds of the music… but that’s all  they could do… and that’s essentially the idea of Session Mode, take someone who can operate the instrument and get them to  play it.

Edwin: Way back with the first Rocksmith, as you yourself got better at guitar, you were challenged to play Radiohead’s “High and Dry” at one of Ubisoft’s company parties — on stage and without the help of the game I may add — how did that go?

Paul: I was amazing.  (At least that’s what my Mum said).

Edwin: OK, fans want to know… Are you an Epiphone or a Gibson fan? What’s your favorite musical weapon out of the two?

Paul: Every guitar is unique.  You have to feel them, find the one you like/love not just to look at, but to play.  I have an Epiphone SG 1966 reissue and a Gibson Nighthawk at my desk and an Epiphone Les Paul Plus Top at home… they all feel different, sound different and look different and that makes each one special.

Edwin: Well that is it fellow Impulse Gamer’s. We see Rocksmith 2014 is filling up the Goblet of Rock with many a tasty tune. You… my fellow gamers have only to drink deep its Rocking Goodness.