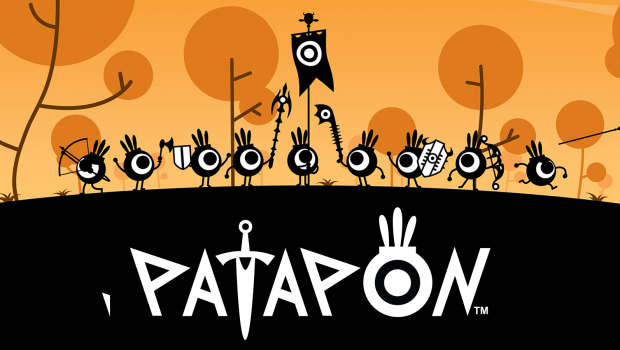 Summary: If you’re new to the game then this is the definitive version, even if it still possesses the design flaws the original had, but make sure you come into Patapon knowing full well what you’re getting yourself into.

Sony has been on a bit of remastering kick lately, focusing heavily on their more whimsical and musically influenced titles of yesteryear such as LocoRoco and PaRappa the Rapper, both of which I enjoyed immensely. 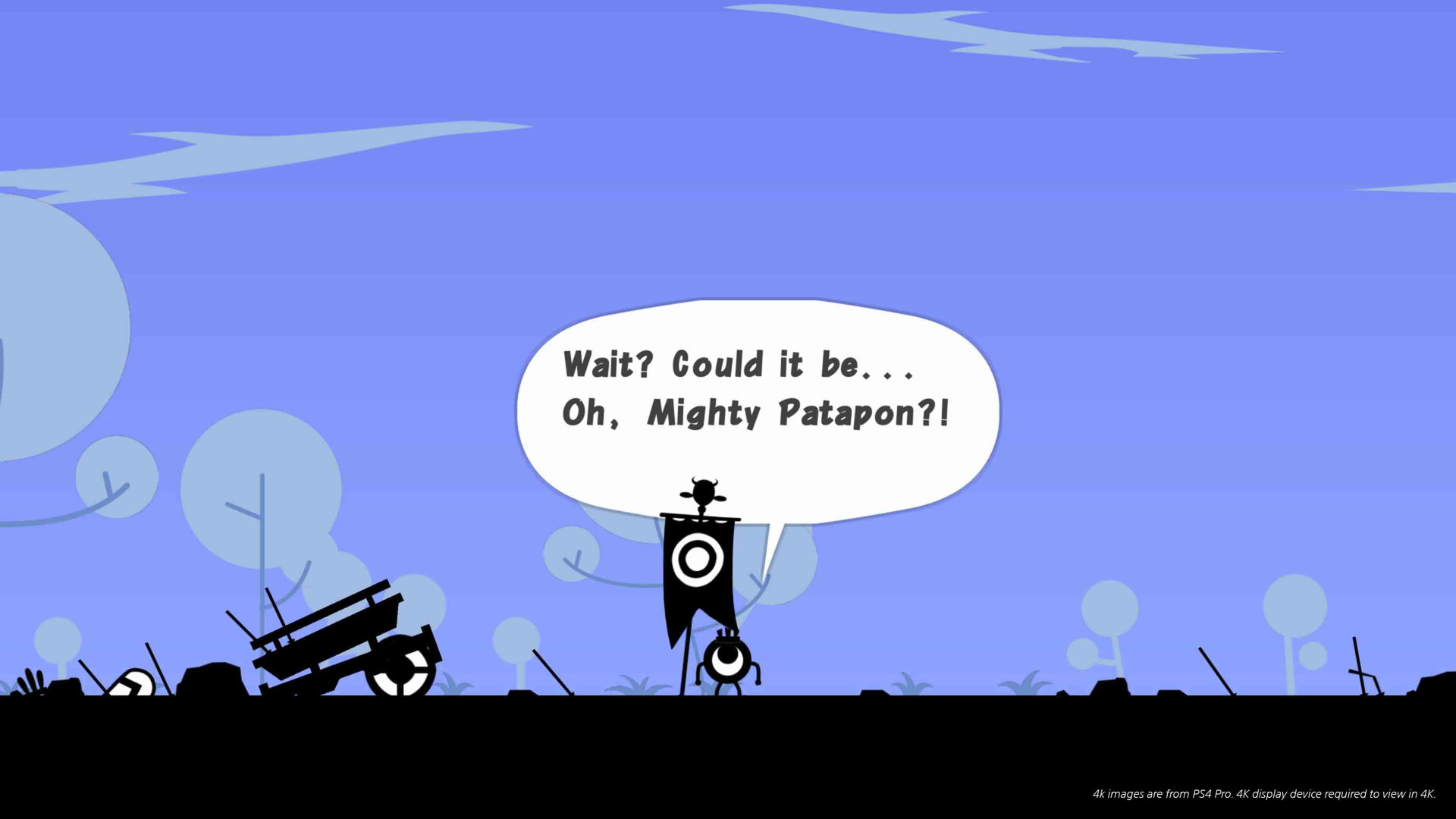 So when I heard that the esoteric rhythmic combat game Patapon was coming to current gen consoles, I endeavoured to check it out and see whether or not it held up to my memories of frantically tapping away on the PSP during long commutes upon its release a decade ago; along with Daxter’s stand-alone title and Chilli Con Carnage, I purchased Patapon along with my PSP and, as such, have had the title inextricably linked to Sony’s underrated handheld in my mind ever since, being as it was one of my first experiences with the console.

Whilst eager to see how much care had been applied to this remaster, I’d be lying if I didn’t admit to some reticence; to me, at least, Patapon was a title that was so perfectly designed for portable play that I was dubious on whether or not the experience would successfully make the leap to the big screen. 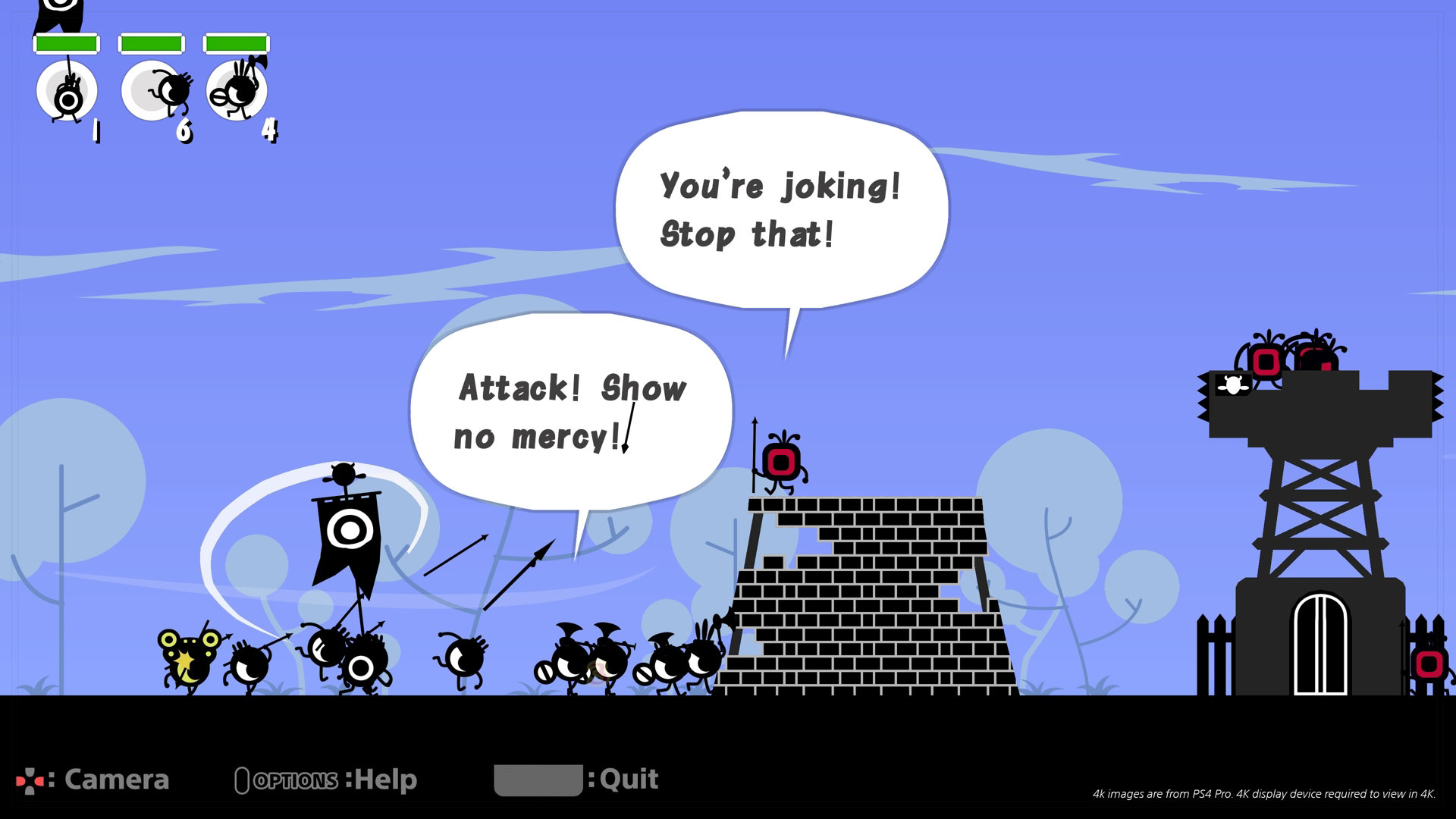 Unlike, say, Tearaway, which utilised the touchpad and added new gameplay mechanics for the PS4 remaster in order to compensate for the differences in control scheme and the like when it made the move from the Vita, Patapon wasn’t really positioned to expand that much upon its initial incarnation, which, while fine for short bursts of gaming on the go, isn’t exactly the ideal candidate for a HD remaster.

The central conceit of Patapon is deceptively simple: You’re the ‘Almighty’, a Deity worshipped by the cyclopean, Mike Wazowski lookalike titular creatures. By using different face button combinations to dictate their actions, you play a war drum for your miniature army to keep step to and embark upon a journey to end the oppression of their right-angled enemies the Zigotons. 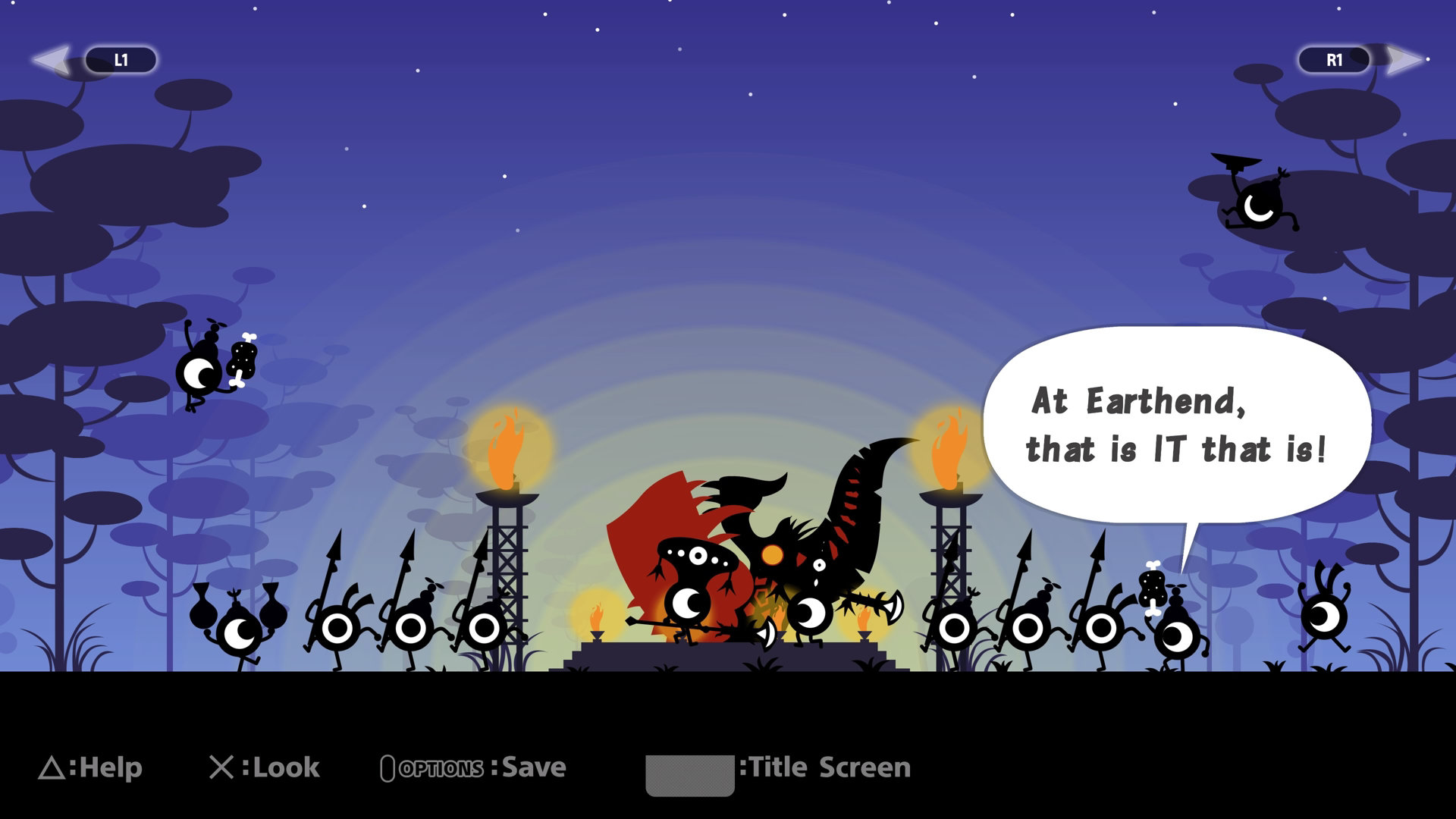 There is a story component to Patapon that, while nothing special, does serve as enough of an incentive to persevere through the tougher sections of the game, of which there are many. Before each stage you arrange the formation of your army, with three main classes initially available – Archers, spear wielding Patapon and powerful tank type characters that head the vanguard. You’ll only have access to a few spear soldiers from the beginning but, after learning the basics and completing a few hunts, you’ll be able to use points acquired to create new soldiers for your ever-growing forces.

Patapon slowly introduces players to its mechanics, allowing you more than enough time to get to grips with a particular button combination before building upon that foundation and adding different actions and special abilities. 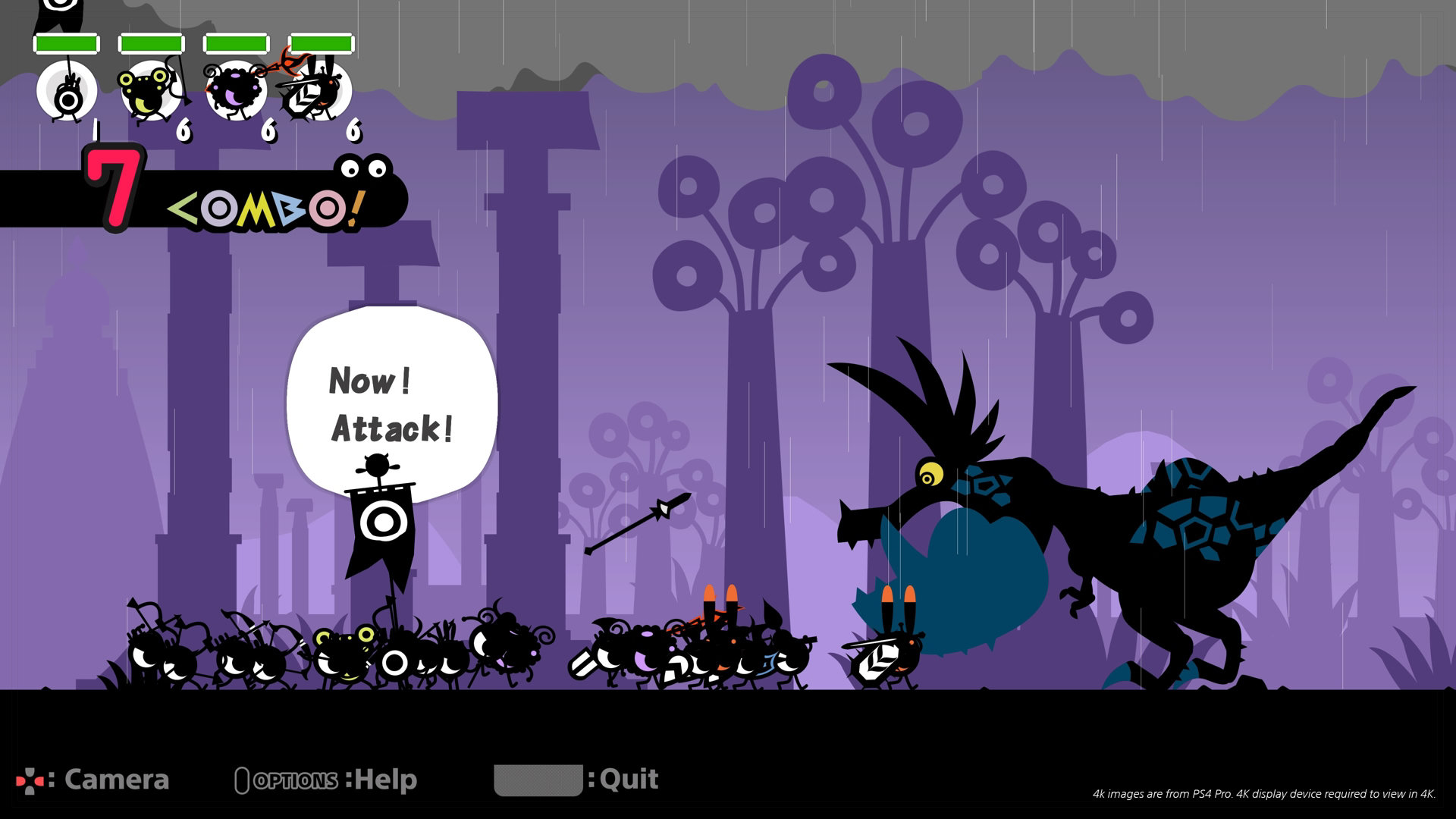 Patapon expects players to tap the buttons to a simple four step beat; the first beat you learn will get your little guys up and moving across the screen before you’re thrust into a combat situation, prompting the need to learn a new beat and incorporate different buttons into your song.

As you progress you’ll learn how to defend against attacks, conjure rainstorms, unleash special moves and much more, all achieved by using different button inputs to the same four step beat. After ten successfully timed drum sequences, your Patapon will go into fever mode, which offers up more points and other benefits but is notoriously difficult to keep a consistent beat to, shaking up the timing ever so slightly. 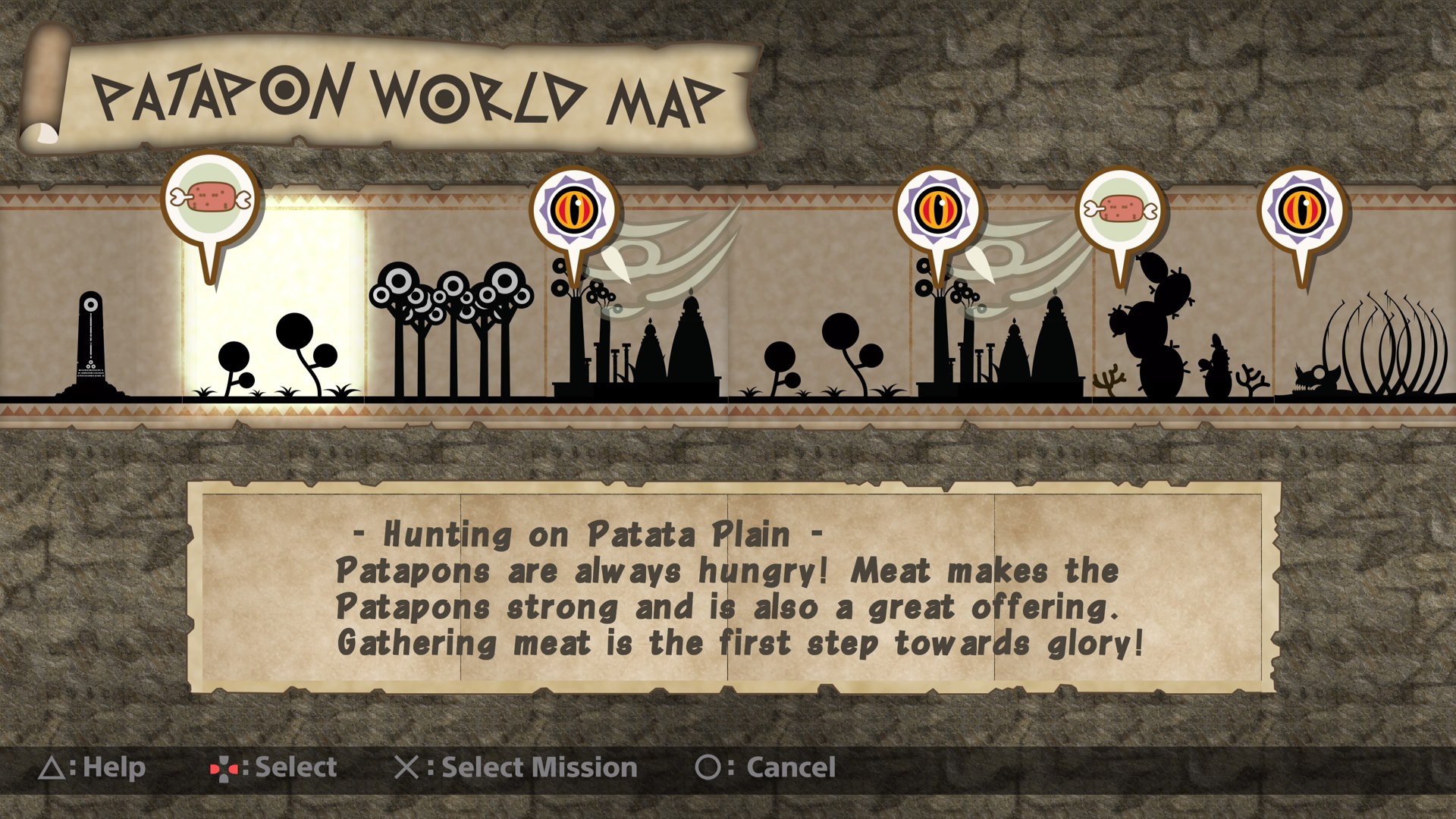 The levels are quite well designed, forcing players to keep a cool head during some pretty intense battles and frantic dashes across burning deserts. Most stages are fairly short, a holdover from the game’s portable design philosophy, but they offer up enough variety to keep you pressing forward in order to see what’s next. One thing that can get frustrating is the monotony of the hunting stages; they can be an entertaining enough distraction initially but, due to the necessity to consistently hunt in order to gain points and materials and build your army, they soon become a tiresome slog where you aren’t given much opportunity to diversify your approach.

This also kind of segues into another gripe I have with the game – sometimes it’s impossible to pass a stage without grinding for extra soldiers. Now, this doesn’t sound like such a bad thing in of itself, indeed most RPG’s and online games promote the grind to some degree, but it feels annoying and somewhat out of place here. 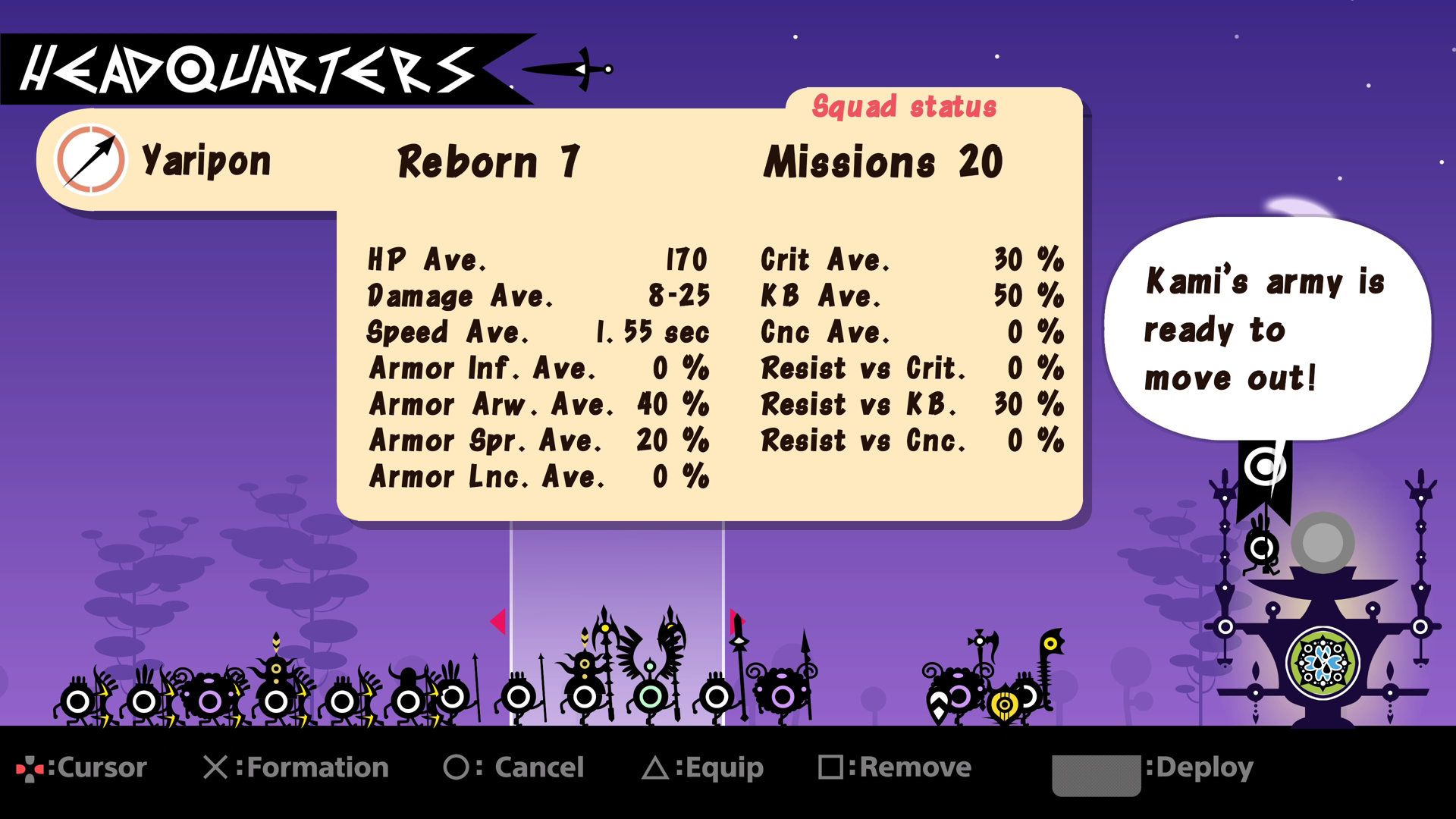 Despite its strategic elements, Patapon is a rhythm game at its heart and having to repeat a stage two, even three times simply because the game gave no indication that you didn’t have enough soldiers to secure victory, as in the boss battles, feels cheap and to then realise that you’ll have to go on yet another time consuming hunt in order to add to you squad can be dejecting.

Once you (Excuse the terrible pun) get into the rhythm of things, however, it’s easier to overlook these issue but I fear that some players won’t stick around after hitting that first difficulty spike in order to experience just how savagely addictive and brutal this simple little music game can get in its later stages. 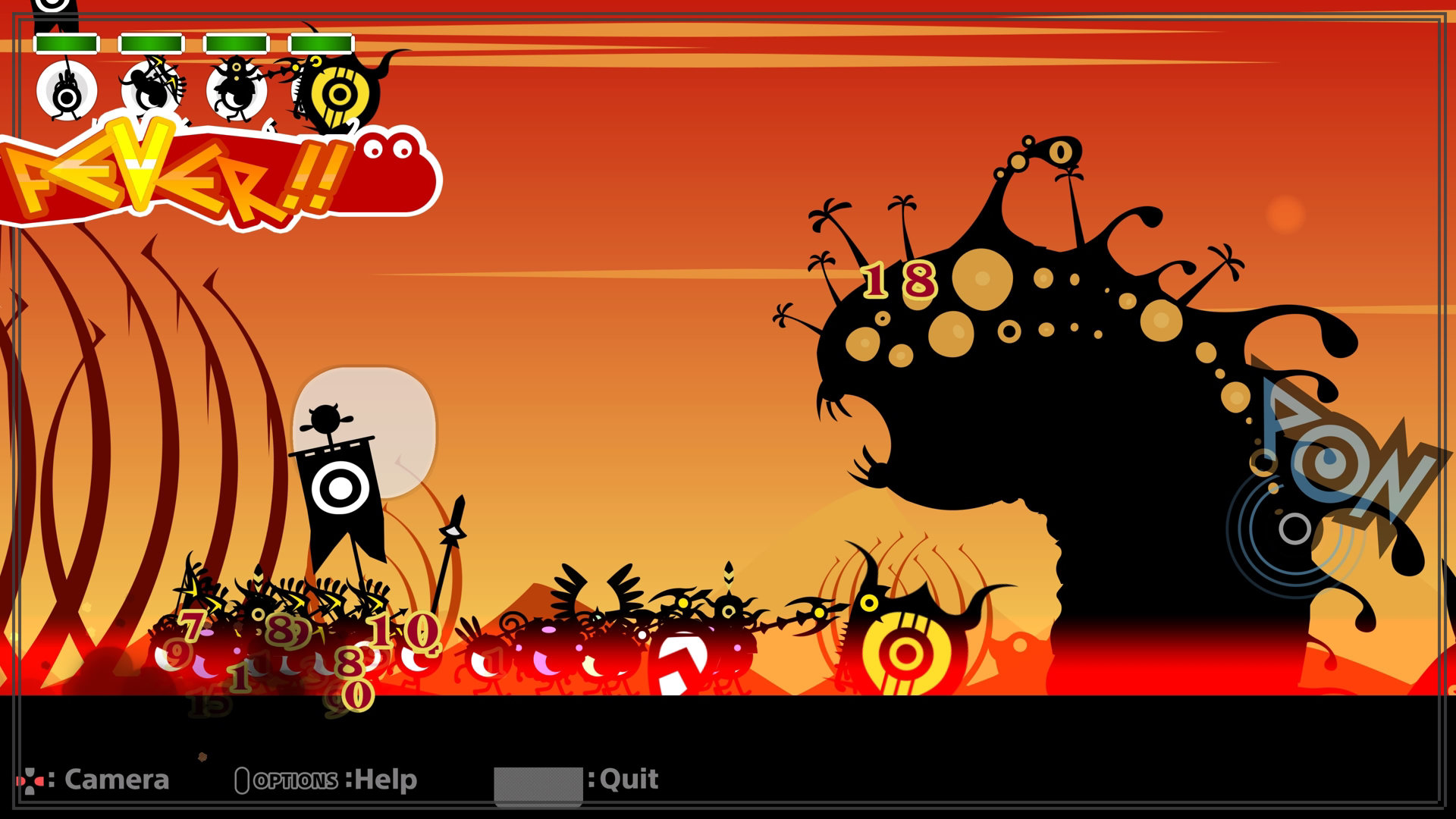 To clarify, by brutal I don’t mean unfairly difficult, as in the previous case, but rather that the onscreen action gets so chaotic and intense, forcing you to constantly switch up your drumming in order to contend with some new unexpected development, that the once gentle process of playing a drum beat becomes a frenzied flurry of blurred thumbs as the game demands more and more precision.

There’s an amazing amount of depth to the combat system and, once you have a decently sized army, it’s fun to try different approaches to each area, such as changing formations in order to hunt more effectively. 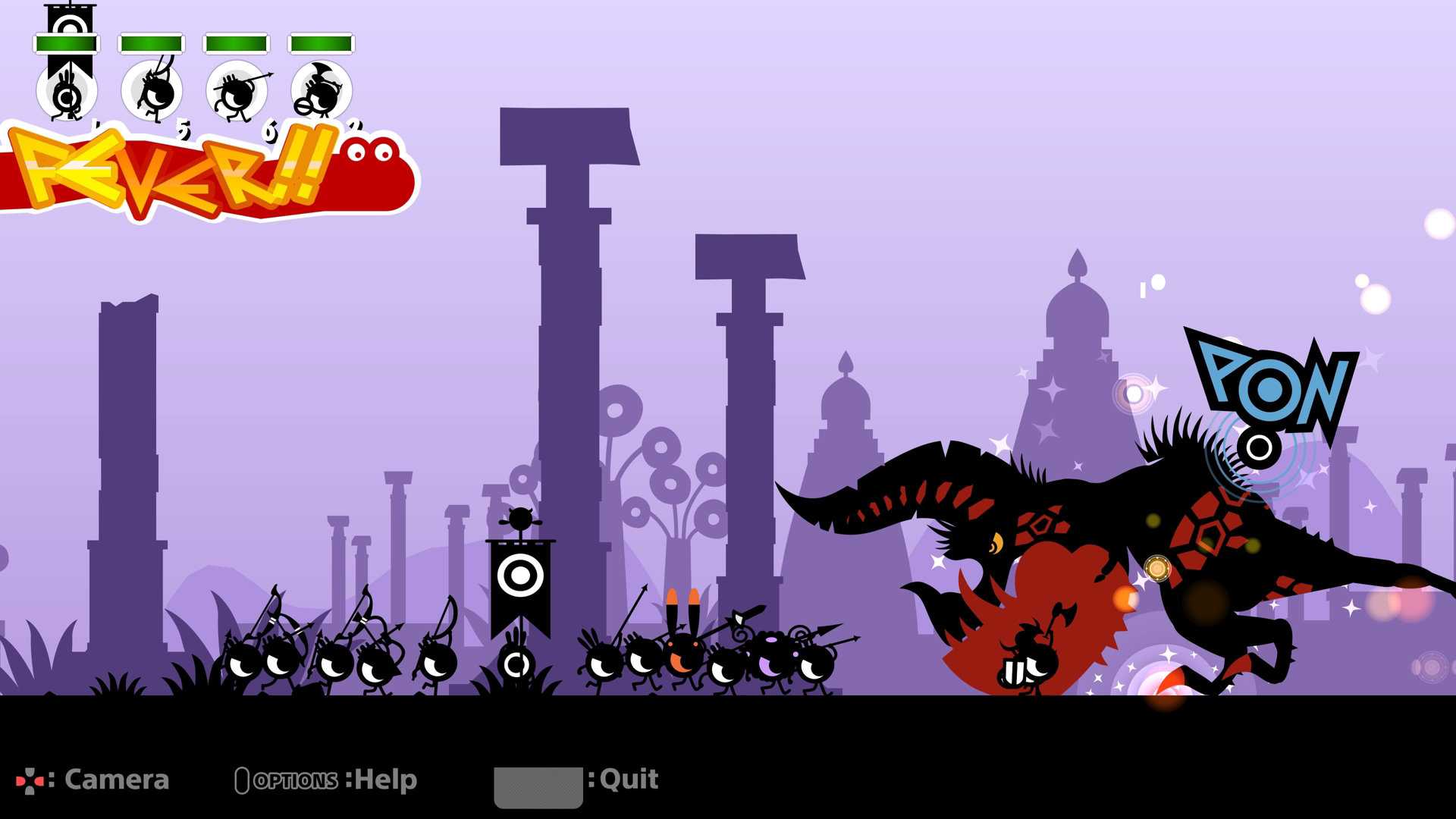 The bright and colourful graphics give off a cheerful vibe, much like LocoRoco, that sits nicely at odds with the increasingly intense gameplay. I’m a sucker for this visual style and the simple characters and silhouetted environments look crisper and clearer than they ever could have on the old PSP.

Considering the genre, you’d expect the music to be Patapon’s strongest asset but, personally, despite a few catchy beats here and there I found the music to be lacking, particularly when compared to other recent remasters like Parappa and LocoRoco.

The biggest problem with Patapon’s soundtrack is that it’s very percussion heavy and repetitive and despite the background flourishes of instruments the music ultimately boils down to chirpy nonsensical sounds from your army and drum beats. Don’t get me wrong, I did enjoy the soundtrack and tunes like the one used to summon rainclouds are super catchy, but there just isn’t enough variation to hold my attention for too long. 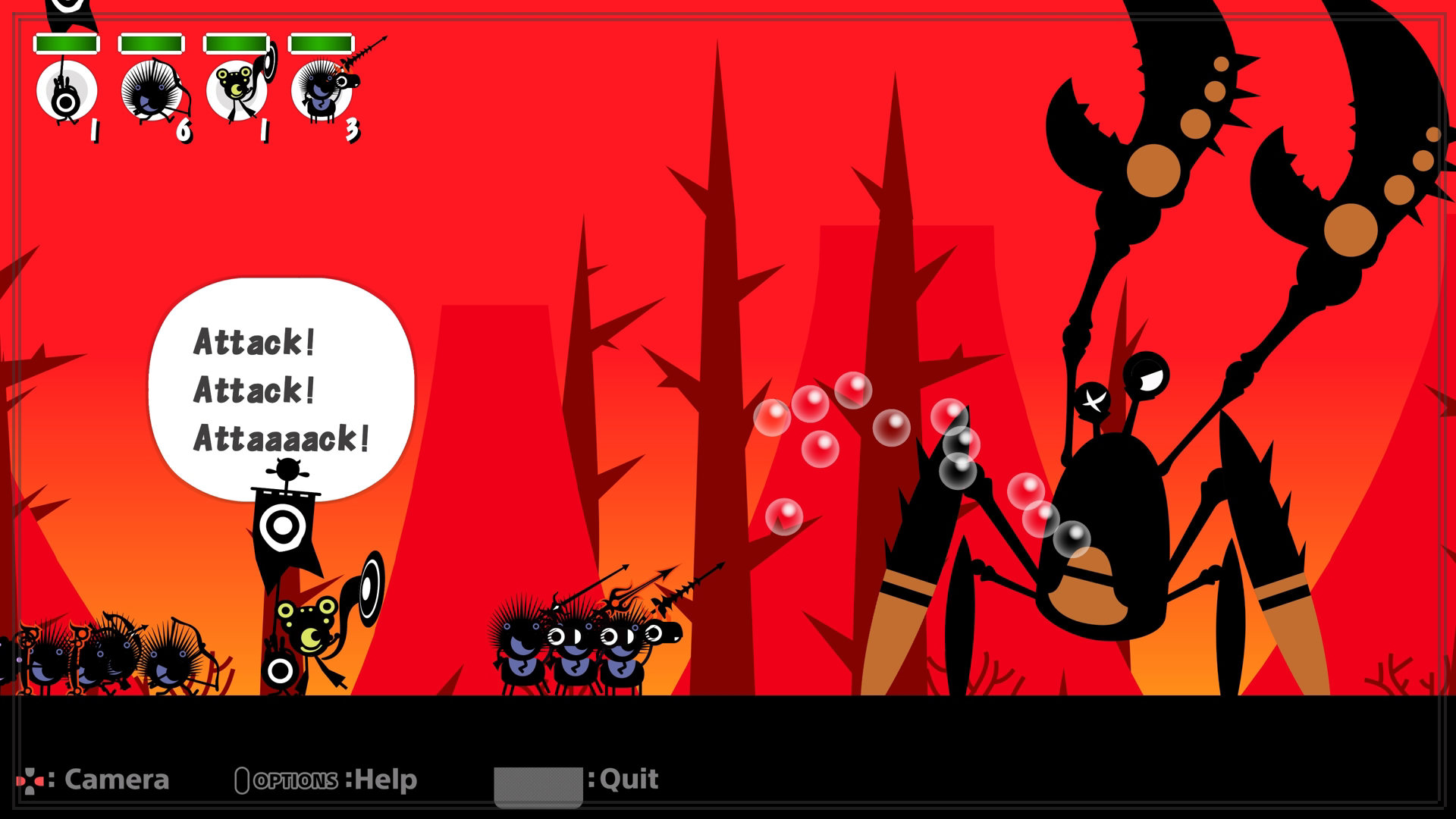 Unlike some who may be considering picking this up, I was a fan of the original release of Patapon and, as such, found that despite my initial misgivings playing Patapon on the PS4 is generally just as fun as it was in portable format.

The remaster doesn’t really add anything of worth besides the obligatory graphical upscaling but the base game is arguably solid enough to entice players to return nonetheless. 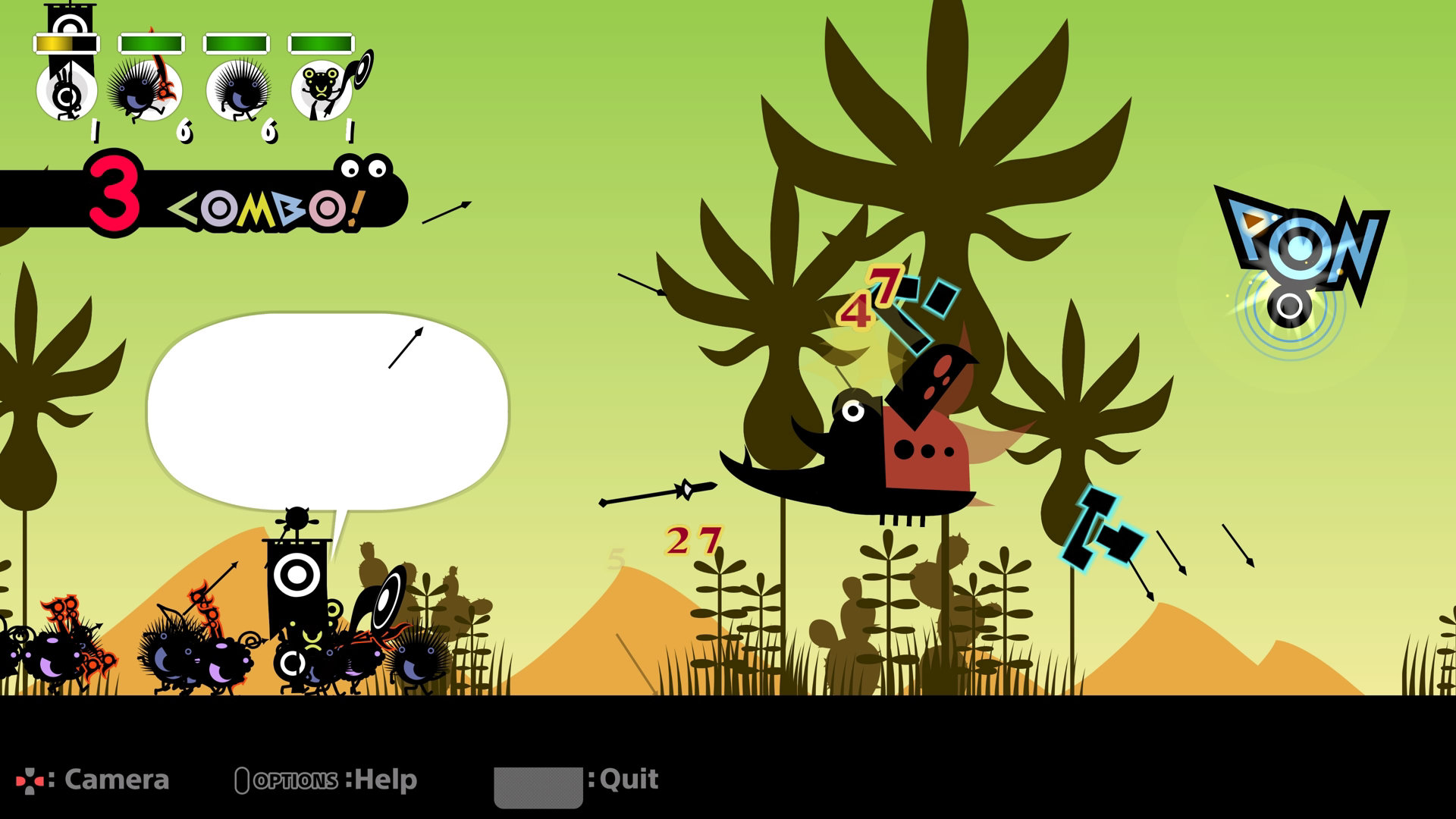 If you’re new to the game then this is the definitive version, even if it still possesses the design flaws the original had, but make sure you come into Patapon knowing full well what you’re getting yourself into, because even for fans of music games, this unique hybrid of strategic, turn-based RPG inspired combat and percussion is an acquired taste.

Me? I dig Patapon, warts and all and can look past the few moments of frustration in order to appreciate that games like this actually exist in an industry that is becoming more and more reticent to take risks as game budgets increase exponentially… And, if you’re so inclined, you can give your Deity a juvenile name and giggle as your Patapon sing the praises of your foul title, which is always a nice option. 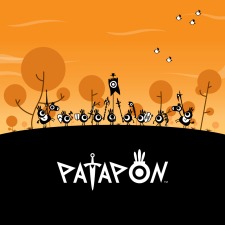