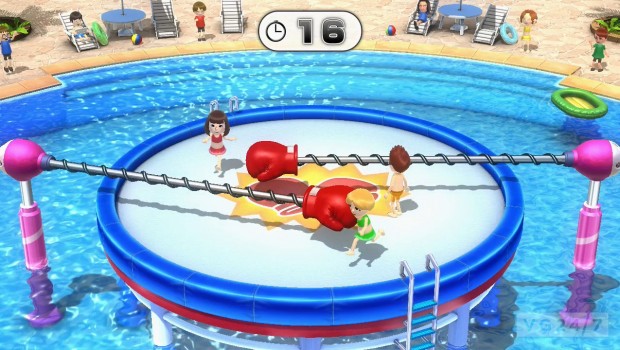 PARTY INTO THE WEEKEND WITH Wii PARTY U – OUT TOMORROW

25th October 2013 – If you’re looking for a game to get the family and friends together this weekend, then look no further than Wii Party U, the ultimate party entertainment title for family and friends of all ages to come together – regardless of videogame skills or levels of experience. Available exclusively on Wii U  and releasing in stores tomorrow, 26th October, Wii Party U features 80 new minigames that utilise the unique features of the Wii U GamePad and Wii Remote controllers, and launches as part of a Wii Party U and Wii Remote Plus bundle* while stocks last.

With Wii Party U, prepare to witness your living room turn into a game show floor with a wealth of interactive board games, off-TV tabletop challenges, and 80 quick-fire, ‘pick up and play’ minigames. Variety is the name of the game in Wii Party U, whether you are looking for a quick 5 minute round of Tabletop Football – where table football comes to life on the Wii U GamePad – on your own or against a friend, or a fully-fledged game show experience such as in TV Party mode, comprising of five different games that can last between 20 and 60 minutes, depending on how tough you wish to make the competition!

In Highway Rollers, Mii characters battle it out along a zigzagging highway, rolling dice at each turn in the style of a classic board game. But with a Wii Party U twist, you must tackle minigames at regular intervals along the highway, such as ‘Close Knit’, where you’ll need to frenetically waggle the Wii Remote as fast as you can to knit the longest scarf, or ‘Cliff Rider’, where a steady hand is crucial when using the Wii Remote to steer your Mii character across a treacherous canyon path whilst riding a unicycle.

Aside from the TV Party mode antics, House Party puts the focus squarely on turning your living room into the actual game field. In ‘Name That Face’ get ready to pull some silly faces to step up to the challenge, with the Wii U GamePad camera capturing your expression and challenging your friends and family to guess what you’re trying to convey. Meanwhile in ‘Water Runners’, the Wii U GamePad screen displays a stream from which you must ladle up the running water using your Wii Remote and bring it back to the water jugs displayed on the TV. With up to 4 players able to participate, be quick but be careful – the last one to fill the jug is the loser!

Whether you’re a videogame veteran or newcomer, prepare to get hooked on one of 80 minigames and a variety of gameplay modes which utilise the unique features of the Wii U GamePad and Wii Remote controllers when Wii Party U releases on Wii U tomorrow, 26th October. From guiding a Mii character across a treacherous canyon whilst riding a unicycle, to competing in a ‘knit-off’, Wii Party U offers gameplay experiences which are always fresh and packed with variety!

*The Wii Party U and Wii Remote Plus bundle comes with a choice of either a black or white Wii Remote Plus, plus a Horizontal Stand for the Wii U GamePad.