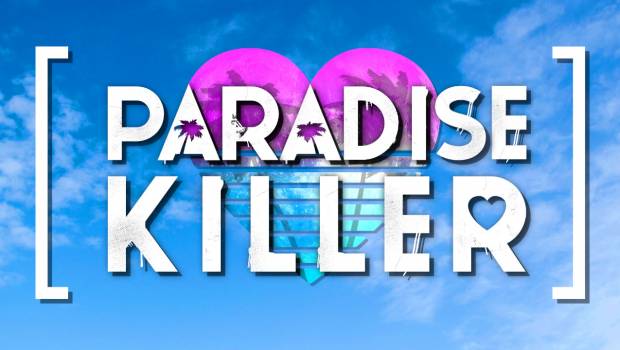 Summary: Paradise Killer is a unique blend of visual novel and open world elements, with a killer story.

The first time I heard about Paradise Killer was in a random message on Discord from a friend of mine. The message simply said “You should play Paradise Killer on the Switch”. Immediately intrigued by the game’s title, I pressed for more details but was flatly instructed “Don’t Google it. Just play it. It’s cool.” The mystery was too tantalising, I needed to play it to find out more. Now here I am, giving you the reader, the same advice. You should play Paradise Killer. For best results, don’t Google it. Just play it. It’s very cool. If you need a little more convincing, read on. 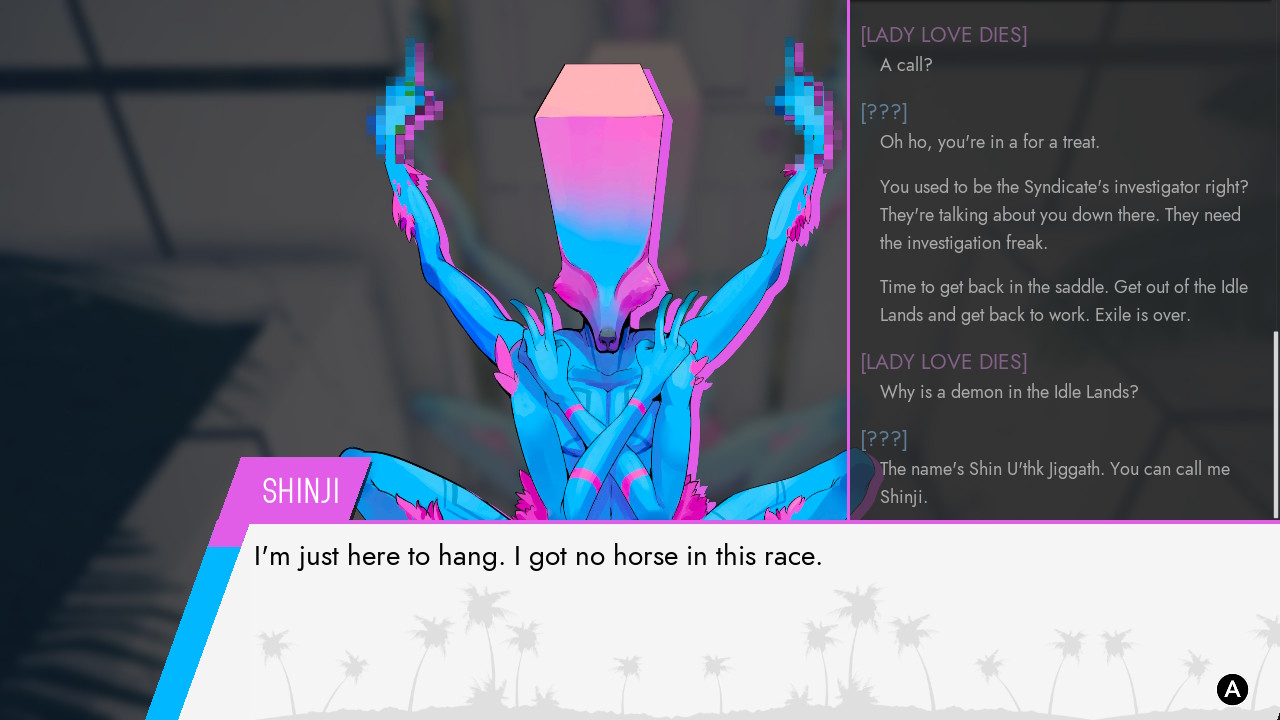 Paradise Killer is one of the most unique and intriguing games that I’ve played in a long time. The best way to describe it is as an open-world, Pheonix Wright investigation-style game set in an absurd alternate reality. This description is actually shamefully underselling Paradise Killer’s whole vibe, but it seems almost impossible to succinctly sum up just how weird and wonderful this game is. I’ll do my best to give a more detailed run down, but I’d like to reiterate once again, the best Paradise Killer experience begins with the player diving in without prior knowledge. 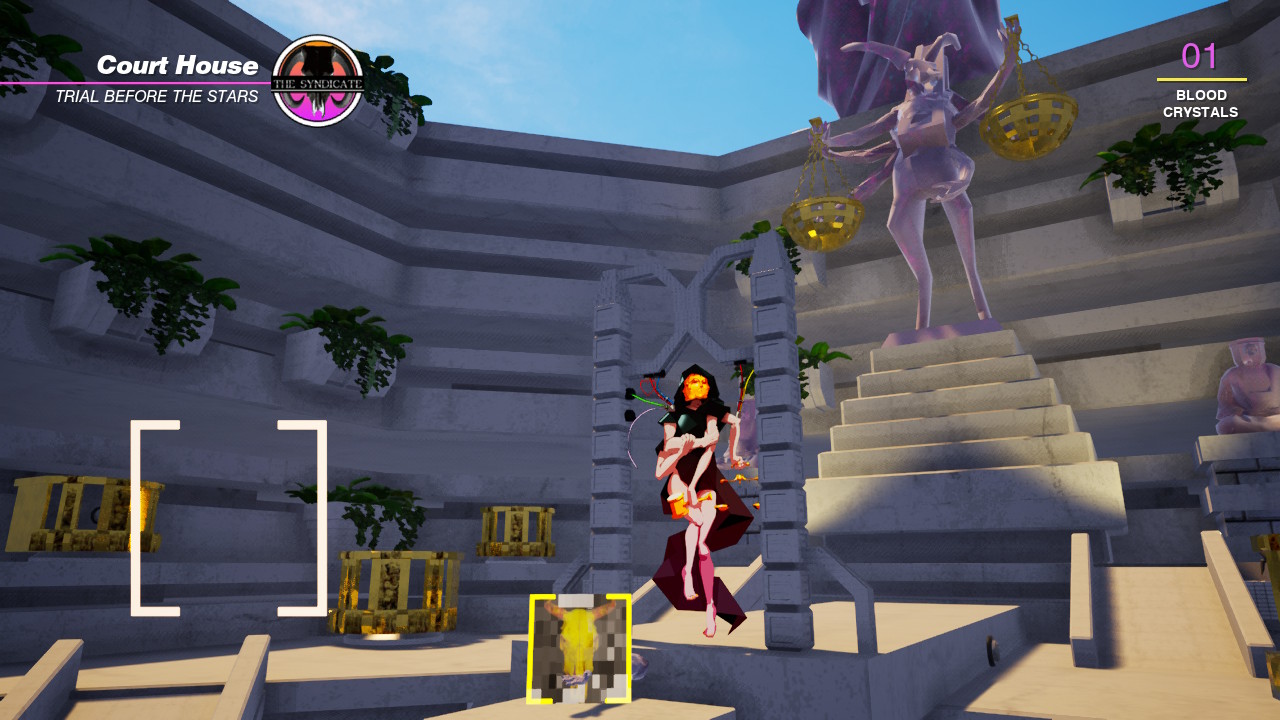 First thing to know, Paradise Killer has incredibly dense lore that may seem impenetrable at first, but eventually makes sense and quickly becomes enthralling the more you learn about it. The universe of Paradise Killer is set in a future where gods and demons have intersected with our reality and humanity has been enslaved by a higher order of individuals that are ritualistically sacrificing humans in order to create an alternate universe to appease the gods and keep the demons at bay. This higher order of individuals have been specially selected to perform specific duties in order to create a functioning society with a shared goal of creating the perfect reality. 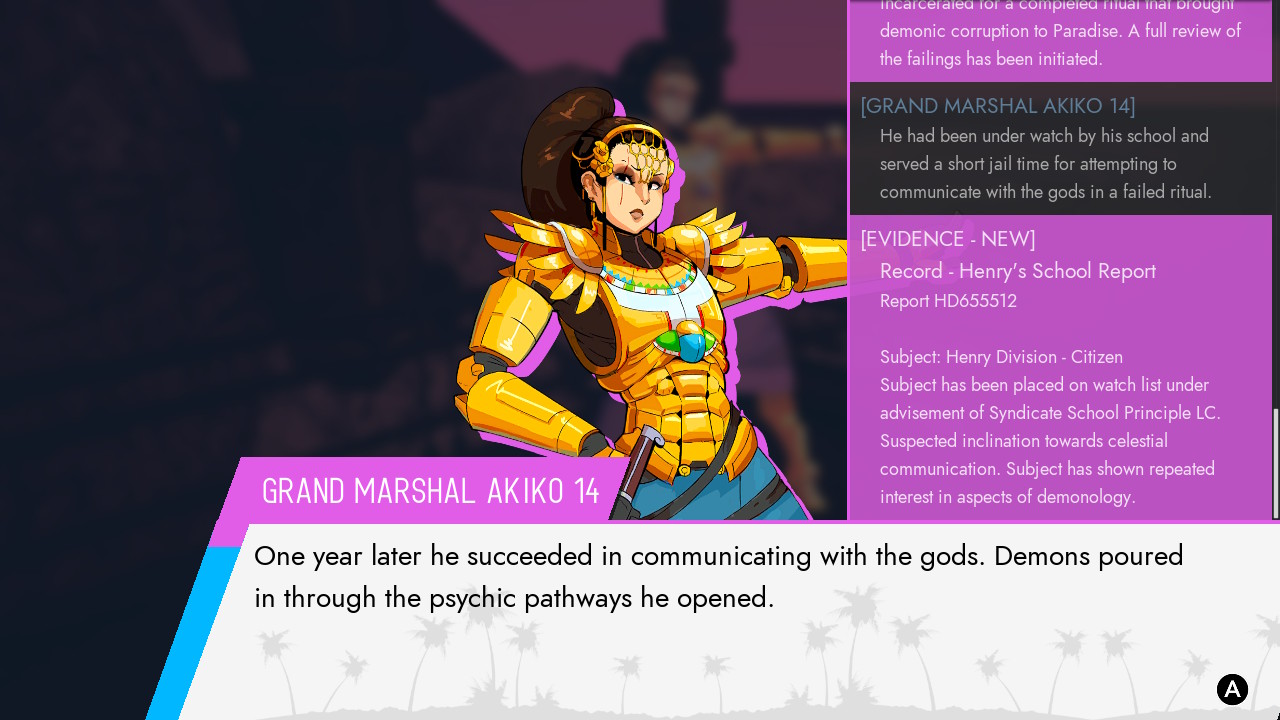 The entire game takes place on a tropical island paradise that is home to each of these higher order individuals and the story begins when the island’s authority council is brutally murdered. You play as Lady Love Dies, cosmic investigator extraordinaire, who has been locked in exile for the past three million years and is summoned back to the island paradise to investigate the murder and convict the killer. To do this, you’ll scour the island for clues, interrogate the various inhabitants of the island and piece together a case to present in front of a cosmic judge in order to convict the killer. 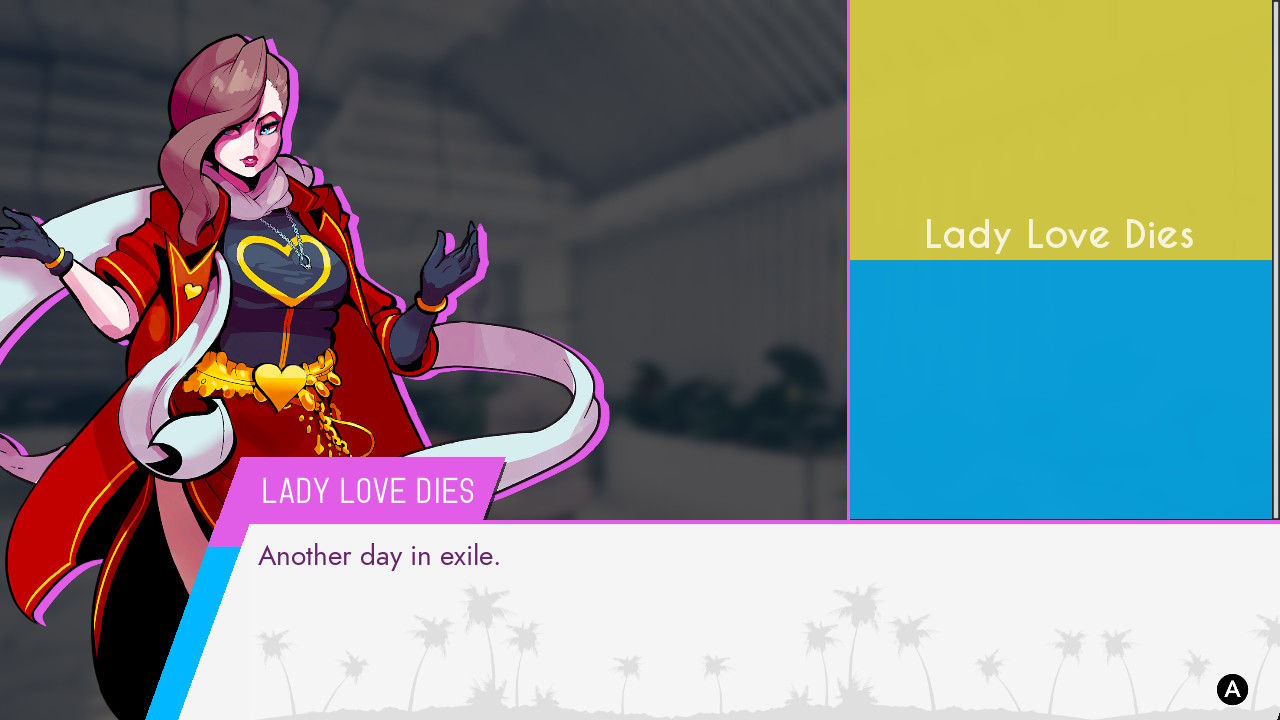 The gameplay in Paradise Killer is split into two distinct sections. The entire island functions as an open world that is yours to explore at your own leisure. You’ll be travelling between crime scenes, tracking down various characters to interrogate and searching for the myriad of collectible items to aid you in your investigation. The island is a huge, fascinating place to explore and is littered with collectible items that are tucked into every nook and cranny. The most common item you’ll find are Blood Crystals, the islands currency, which is used to buy upgrades and fast travel throughout the island. However, keen eyes and a nose for clues will also find valuable evidence hidden throughout the island as well. 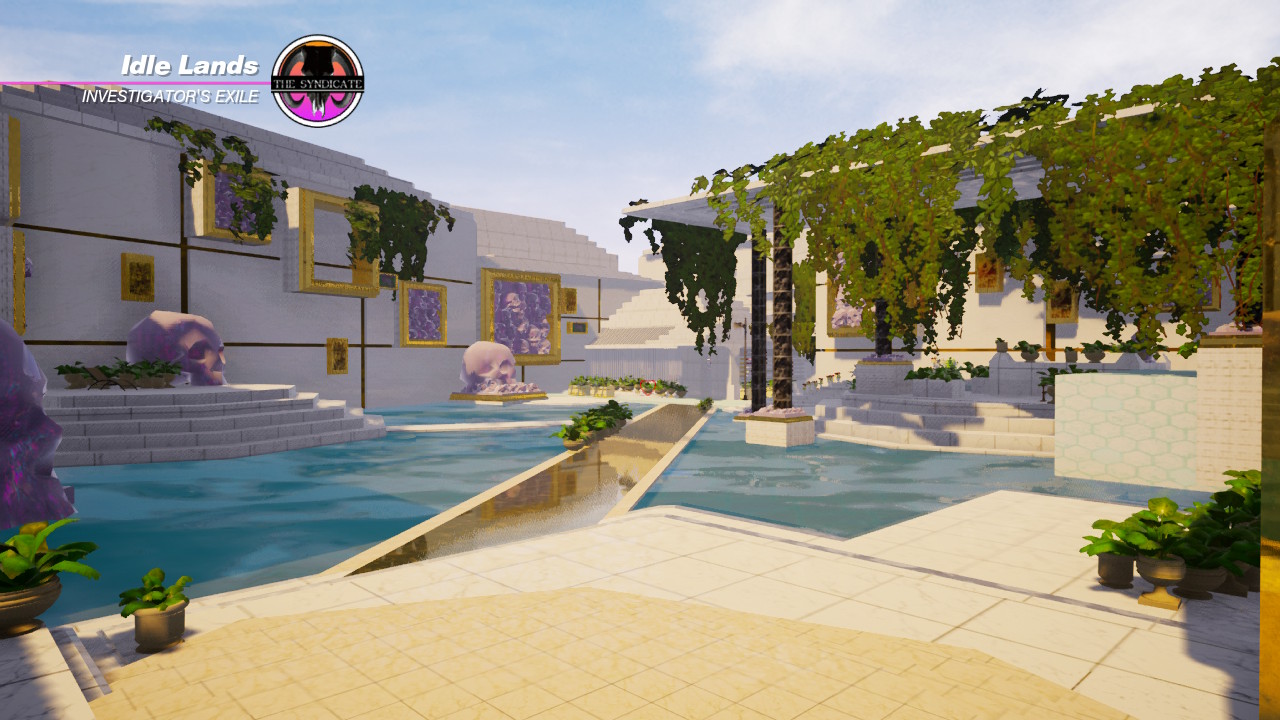 When you’re not exploring the island and searching for clues, the rest of your time in Paradise Killer will be spent interviewing characters in a visual-novel style dialogue exchange. As mentioned earlier, the world of Paradise Killer is bursting with lore and the way you absorb all the intricacies of the world and its community is through conversations with people. The dialogue options are fairly expansive and reflect the evidence you have found or testimony you have acquired from other characters. Unfortunately there’s no punishment for saying the wrong thing or overstepping an interrogation, so the most effective way to ensure you have all the evidence is to simply exhaust every dialogue option, which feels disappointingly inconsequential. With that being said, the writing is truly excellent and the lore is utterly fascinating in its own self-serious, wacky way, so you’ll most likely feel compelled to wring every last drop of story and lore from the dialogue system anyway. 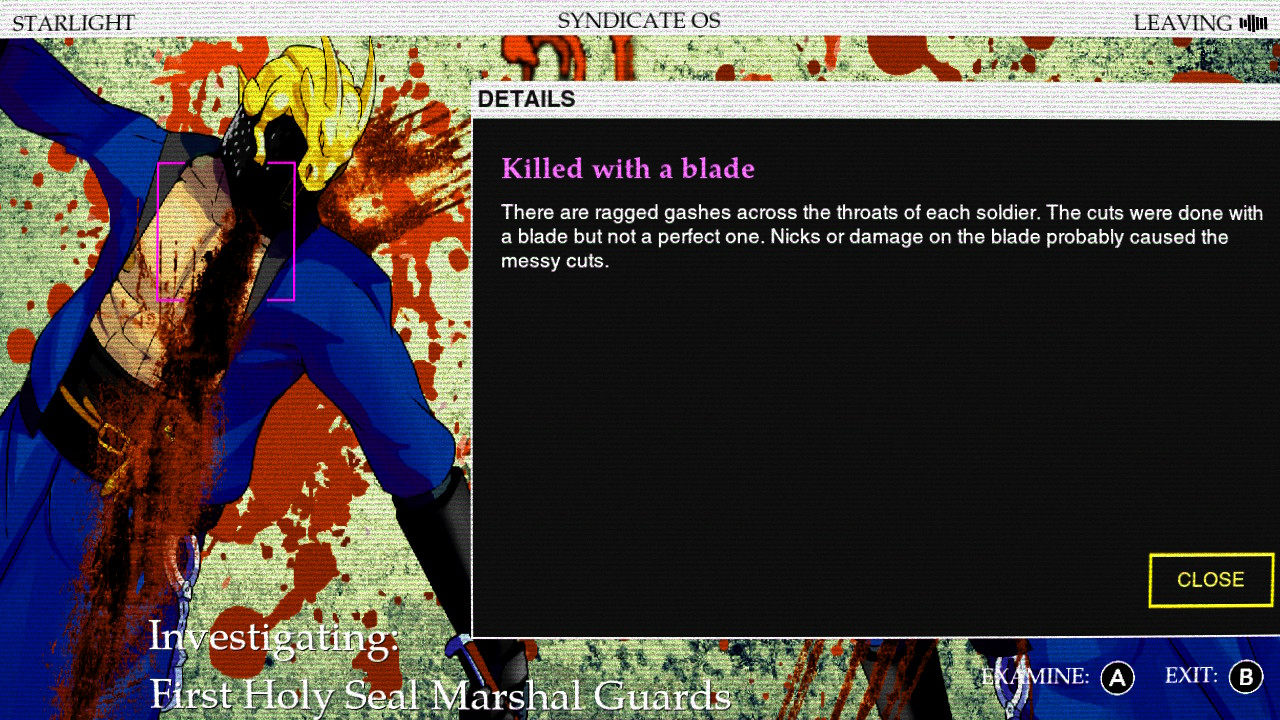 The glue holding together Paradise Killer’s two disparate gameplay elements is the game’s aesthetic design. As bizarre as the Paradise Killer universe is with all its convoluted deep lore and over-the-top characters, the only reason it doesn’t come across as overbearing insanity is because it’s presented with a confidently vibrant and stylish aesthetic. All the characters look like a cross between Dragon Ball Z villains and Bayonetta bosses, and they have names like Doctor Doom Jazz (he’s a hunky Irish punk with metal arms who is the island’s physician). The island itself looks like it was created by an algorithm that downloads random environments from the Unreal Engine development community and mashes them together into a single landmass. To top it all off, the soundtrack is comprised of some absolutely glorious neo lounge jazz style tunes that immediately sets the tone as playful, ridiculous fun. Let me be clear, this is most certainly style over substance and the score below reflects the graphical style of the game, rather than it’s mostly unimpressive graphical fidelity. Sure, the island can occasionally resemble a student project with its layout, and the map system is almost useless as a navigation tool, but these issues hardly sour the experience when compared to the overall picture. 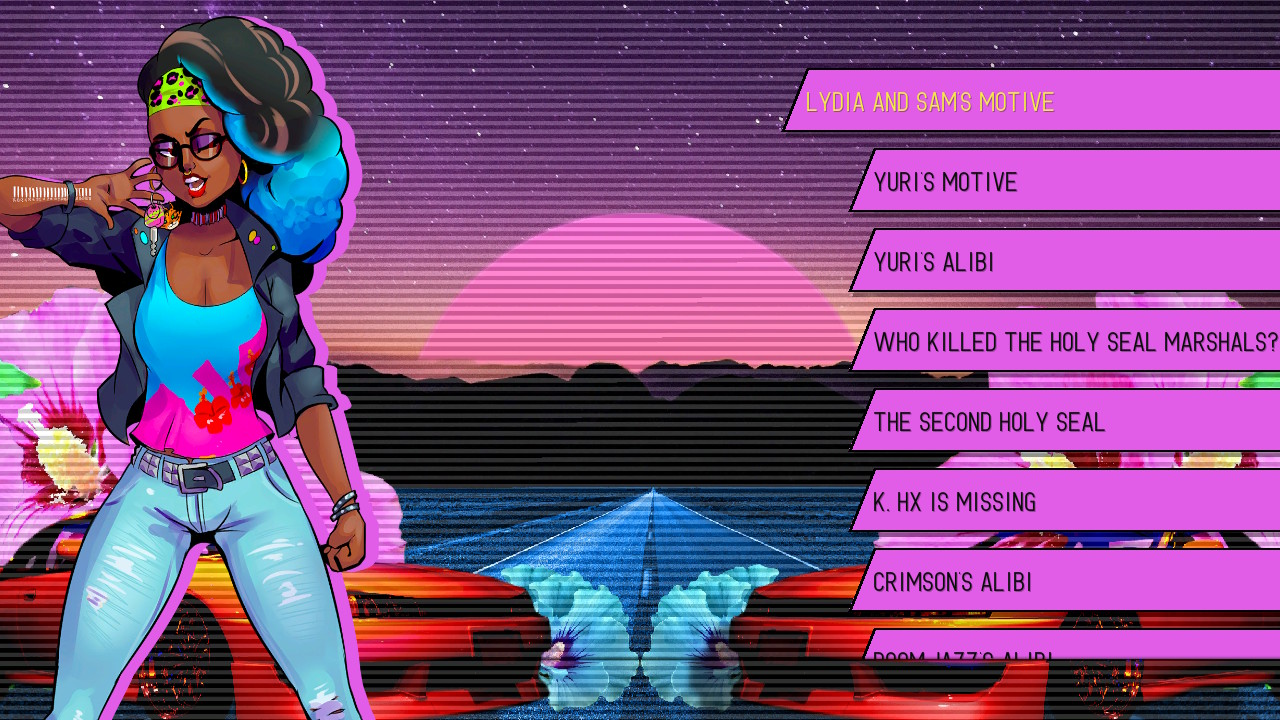 Describing Paradise Killer is quite difficult to do, and if you remain unconvinced as to whether or not you’ll enjoy this game, I implore you to give it a shot. The story is absolutely captivating and the lore of the universe is unlike anything I’ve seen before. The game marvelously intertwines open world exploration with deep conversation trees and you can actually feel yourself building cases in your mind as you uncover more and more clues. If you’re not into parsing through pages upon pages of dialogue to get the full story, then Paradise Killer probably isn’t for you. But if you’re willing to invest the time, Paradise Killer will undoubtedly be a memorable experience. 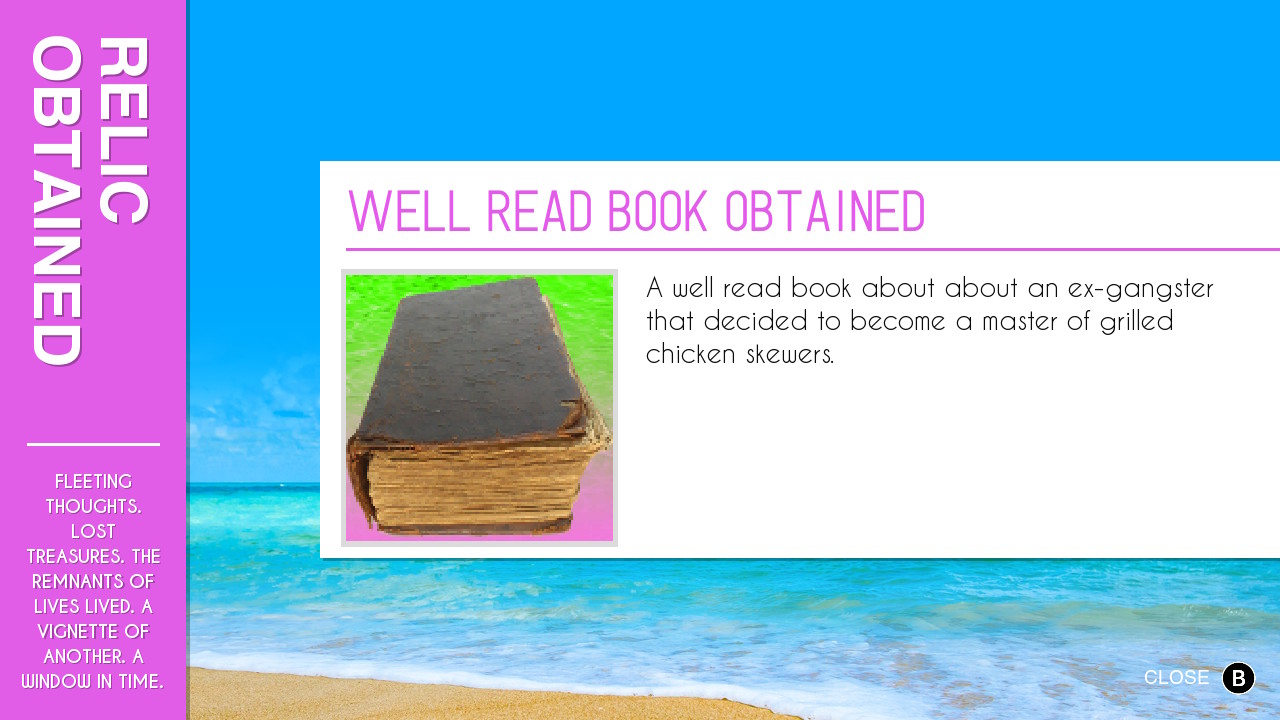 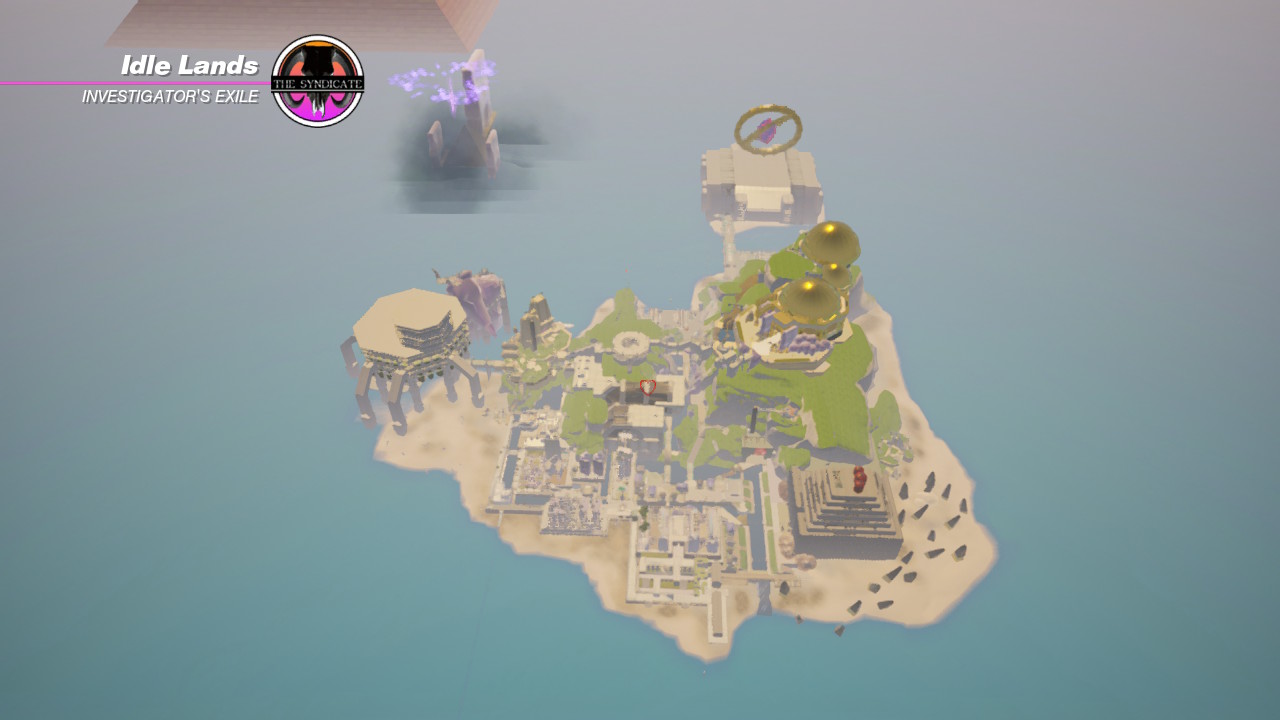 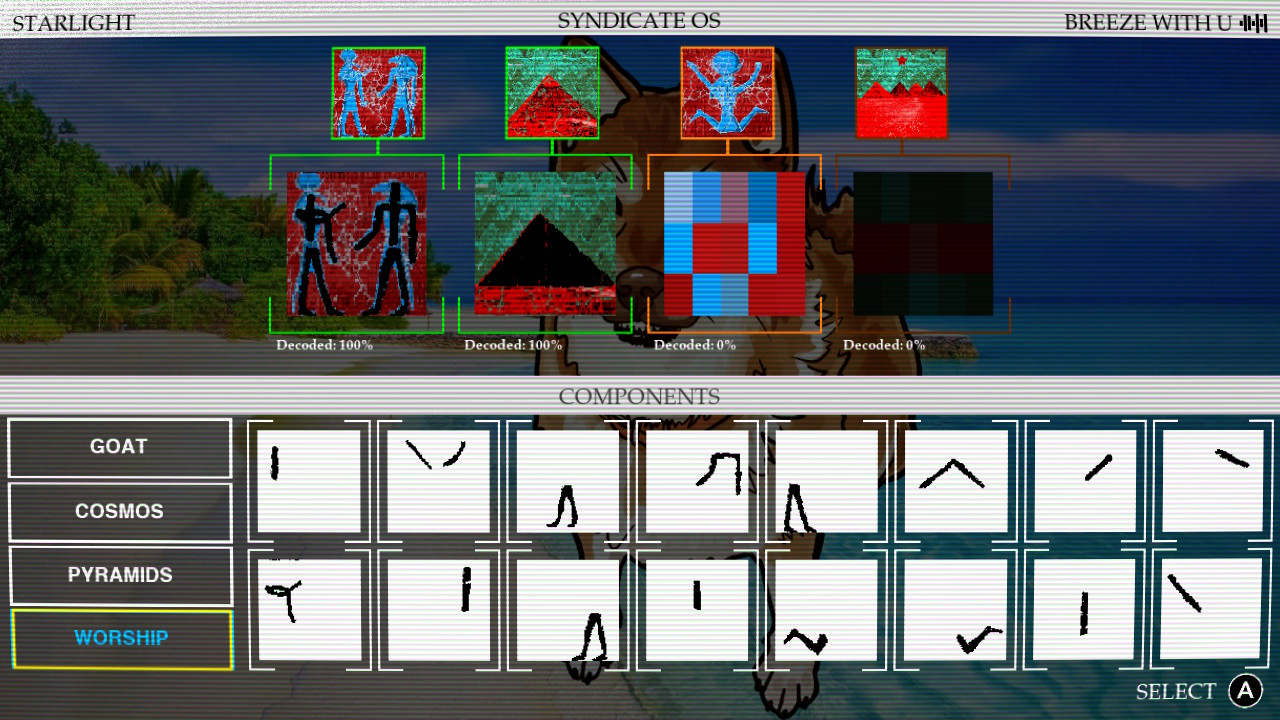