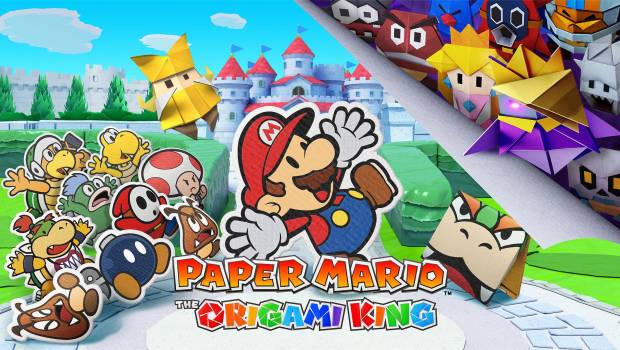 Summary: A light-hearted, casual action-adventure game with basic of RPG elements that will appeal most to younger Switch owners and newer Paper Mario fans.

Did you ever know that weird kid who asked questions about the Mushroom Kingdom and its denizens nobody else really cared about? Like, where do all the Toads live? Are there good Goombas and Koopas? How about other countries that exist there? That was me.

The first few Paper Mario games indulged in that sort of childhood curiosity in wacky, wonderful ways by introducing lands and legends the main series could only tease, using a clever paper visual style to make the game feel like an epic story book filed with Mario’s many grand adventures come to life.

The non-traditional representation of the Mario universe, the simple but satisfying turn-based combat system and its sharp, witty story-telling all helped elevate Paper Mario beyond just being an experiment, and to become Nintendo’s definitive Mario role-playing franchise. In the last few years, though, Paper Mario has moved away from its RPG origins and toward an action-adventure experience, with more emphasis on exploration and its papercraft aesthetic.

Paper Mario: The Origami King balances this continuing transition far more delicately than its two most recent predecessors, but the end result feels like a game that would have been better if it had just completely eliminated turn-based combat and fully embraced its new direction. 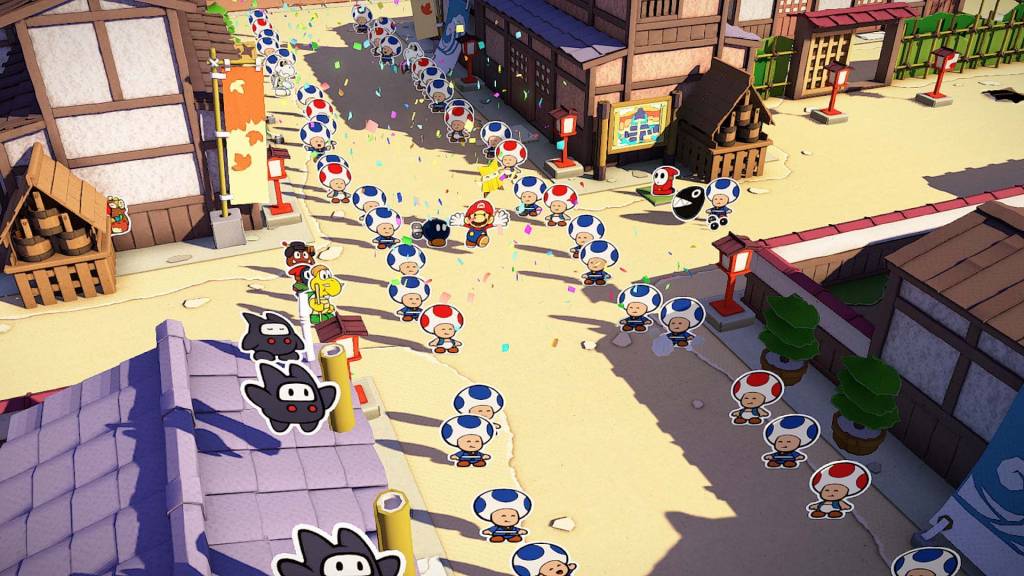 The Origami King wastes no time in embroiling Mario in yet another quest to rescue Princess Peach, his brother Luigi and the Mushroom Kingdom from a new threat called the Folded Soldiers. Led by King Olly, these minions fold paper-thin citizens against their will into living, breathing origami and plan to fold the entire kingdom. With the help of Olly’s sister Olivia, Mario embarks on a new journey to defeat King Olly and unfold everyone back to normal. It’s all very light-hearted and cheerful, which will definitely resonate with many in tough times like now.

Simplistic stories that unfold into grander adventures are a staple of this franchise, but The Origami King’s main quest failed to grip me. Much of it has to do with the main antagonist, Olly, who lacks the interesting design or motives of past big baddies, and Olivia being the most milquetoast partner for Mario this storied franchise has seen. You get to meet a variety of wacky characters throughout the story, some who join temporarily, but Olivia is the main companion, and I hoped she’d be more interesting. Instead, her interactions are intrusive and bland compared to the varied partners of past games The series is primarily for younger audiences, but past entries balanced the need for a guiding hand and interesting companions quite well – making Olivia’s unskippable hand-holding disappointing. 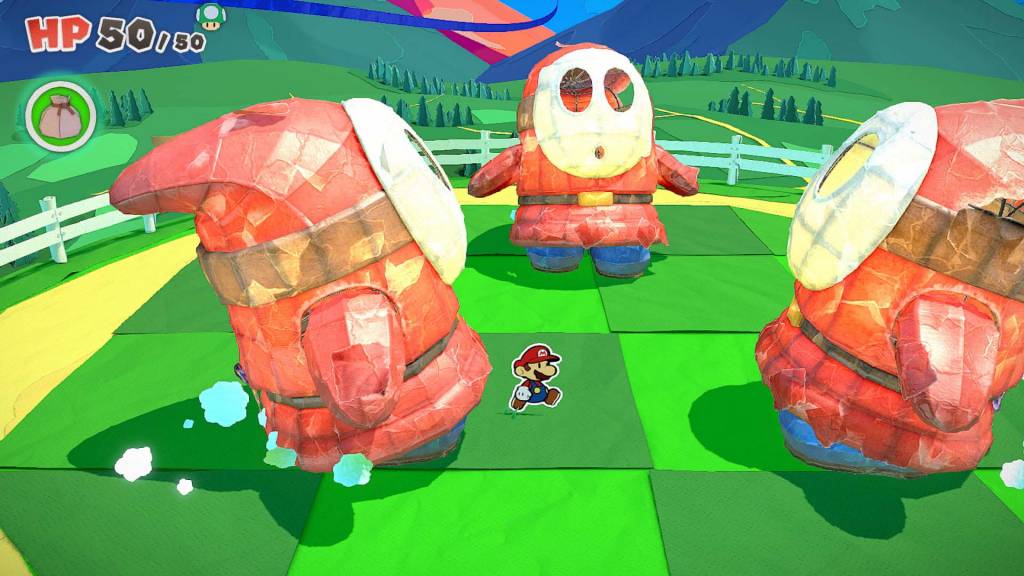 The best I can say for The Origami King’s story is it keeps you entertained with sharp dialogue and witty puns that line up well with its more aggressive papercraft aesthetic. Nearly every Toad, Dry Bones, Shy Guy, and Koopa you help and meet have something mildly funny to share, and the game leans heavily into the fact the world and its people are all made of paper. Mario can now tear parts of the paper-based environment apart with his new Fold Arms ability to solve puzzles and discover secrets, and a large part of exploration and level progression involves collecting scattered confetti to fill in gaping holes across the world and restore the Mushroom Kingdom to normalcy.

The areas Mario traverses are very well realised. King Olly’s takeover involved pulling Peach’s Castle into the sky around five foloured streamers from all around the Mushroom Kingdom, and you’ll be following those streamers as you navigate origami-ravaged Toad Town, spooky islands, autumn-coloured mountains, paper deserts, the high seas and more that make good use of the origami-filled, papercraft style. If there is one consistently strong element of The Origami King, it’s the game’s rewarding exploration in such a great variety of colourful environments. There’s folded Toads to save, collectibles to discover, and hidden nooks with tons of coins and items. One thing that fell flat for me is every Toad you save (and other NPCs like Koopas or Shy Guys) look identical aside from colour palette swaps or an accessory here or there – with none of the diverse cast variety of past games. 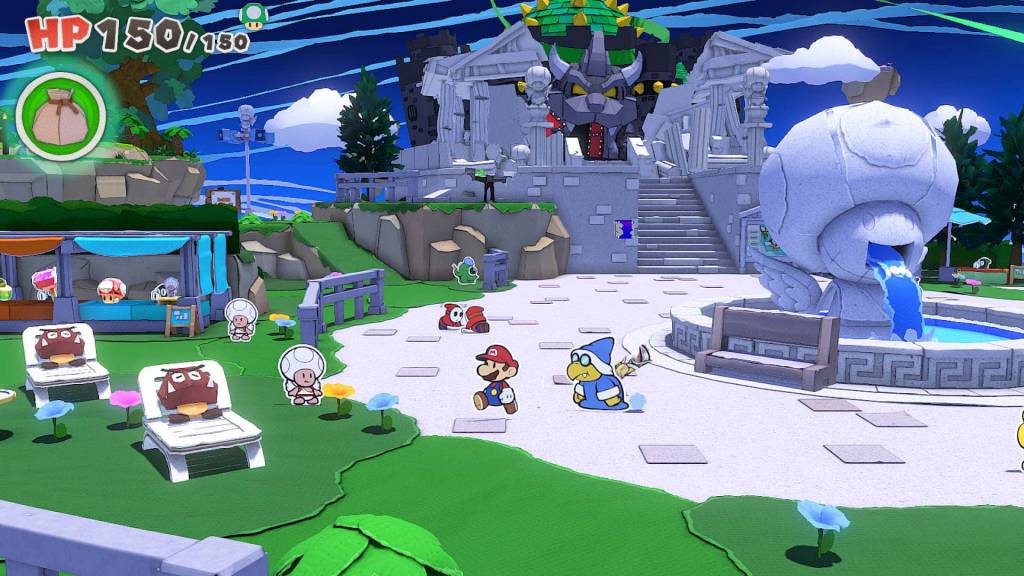 I still had fun just exploring, but I’m baffled and disappointed by the new battle system. For the third game in a row, developer Intelligent Systems have managed to make combat feel too easy, tedious and unrewarding, and it has to do with their inability to let go of turn-based combat mechanics completely. To clarify, I’m a big fan of the original RPG systems, but they need traditional levelling systems, equippable badges and experience points to go with it. In The Origami King, none of those things are present, making fights feel pointless. Avoiding them is almost encouraged.

The Origami King melds turn-based combat with a new puzzle-focused battle system that places enemies on a rotational ring around Mario. You have to slide and line up enemies properly while under a countdown timer to maximise the amount of foes you can take out in a turn, with the main weapons being Mario’s jump, his hammer or a number of consumable items. Battles award you with copious amounts of coins, which can be used to buy more consumable items, accessories with passive bonuses or call in Toads you have rescued throughout the game to give you assistance during combat. Ultimately, combat loses its lustre after an hour; you don’t earn any unique equipment, you aren’t progressing in levels, and the time it takes for actions to play out feels like it’s just padding out the game. Partners are also back, but without any way to manage them, and they contribute minimally in fights. What’s confusing is there are real-time battles against paper mache mini-bosses and wandering enemies that use puzzle-solving to take them out, and they don’t take you away from exploring; TOK should have transitioned fully to this new approach and ditched the ring-based combat altogether. 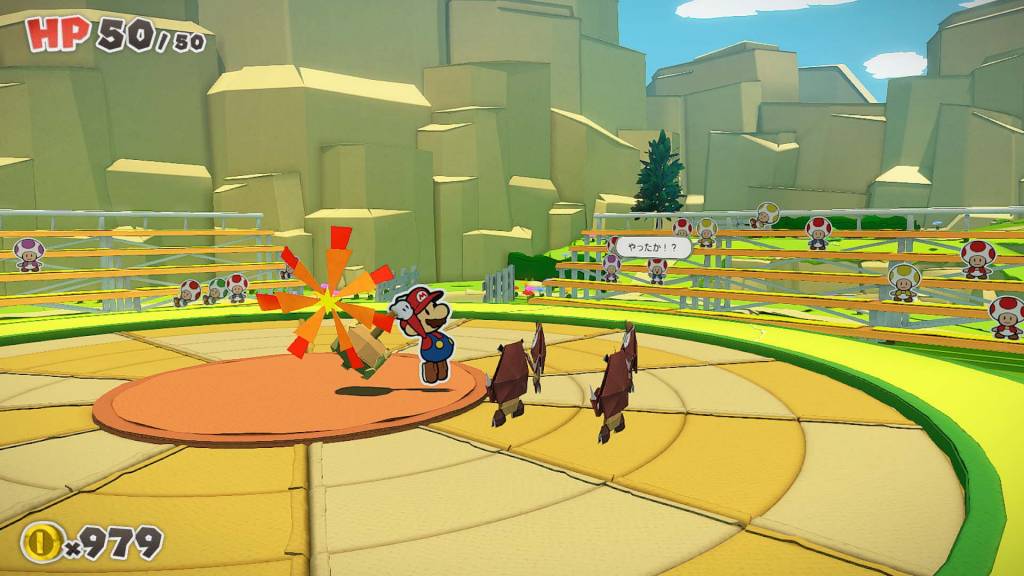 One area where the new ring-based combat system works are the boss fights, which all gradually introduce more welcome creativity and unique scenarios into the new formula. It’s a shame, then, many boss designs look so uninspired and boring to fight. The baddies protecting the streamers, the Legion of Stationary, are literally sentient real world office tools like scissors and coloured pencils. They feel so out of place and lazy, even in a world designed around papercraft and origami – this is from the franchise that produced fun new enemies like Hooktail and the Koopa Bros. The Vellumentals are more original, but I can’t help but feel baffled at Nintendo’s well documented, stifling limitations to avoid the wackier (and superior) character designs of older titles.

In terms of graphics, it’s clear Paper Mario: The Origami King is one of the Nintendo Switch’s best looking titles. The paper aesthetic is clean, creative and timeless – and while I prefer the storybook approach of the original games, there’s something to be said about the wire scaffolding holding up the paper world, the cardboard walls, the folded seams, the pops of colour in every corner of the vastly different environments you traverse. Performance is stable too, across both handheld mode and docked mode, and the audio design and soundtrack and boss battle themes are just as jovial, up-beat and adventurous as it’s always been. 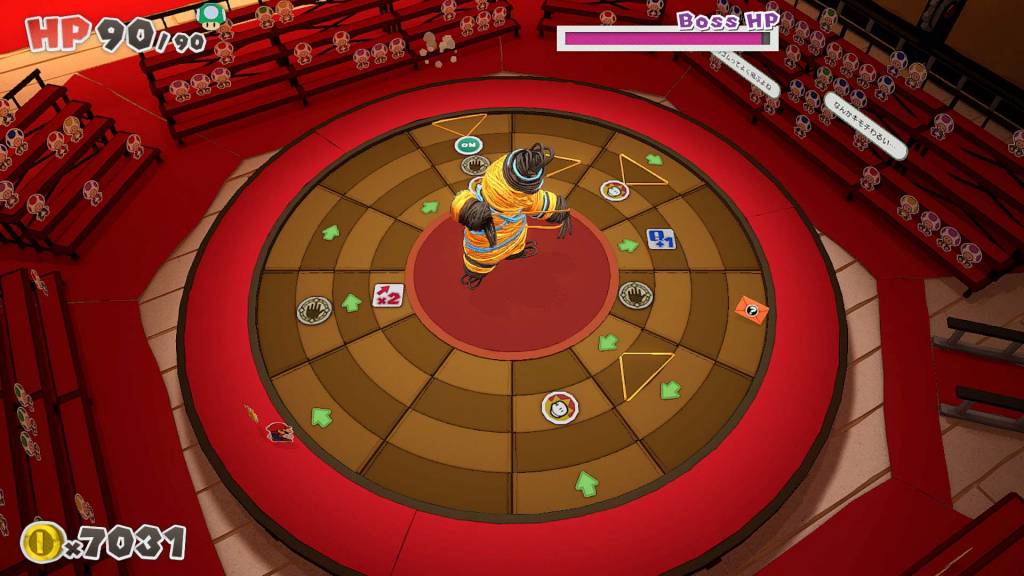 Paper Mario: The Origami King is a light-hearted and casual action-adventure game with the most basic of RPG elements thrown in that will appeal most to younger Switch owners and newer Paper Mario fans. It’s a visual feast, easy to jump in and great for kids.

The combat is far from challenging, and there’s far more of an emphasis on light puzzle-solving and breezy exploration that hooks you in with constant paper puns and a fully realised, papercraft world to explore instead of a compelling epic narrative worthy of a storybook.

It’s understandable The Origami King won’t appeal to most players, especially mega-fans of the original titles – this is most definitely not a sequel to The Thousand Year Door – but as its own standalone experience, it’s still a mildly entertaining and well-crafted game. It definitely solidifies the new world order/action-adventure direction for the Paper Mario franchise – for better, or worse. 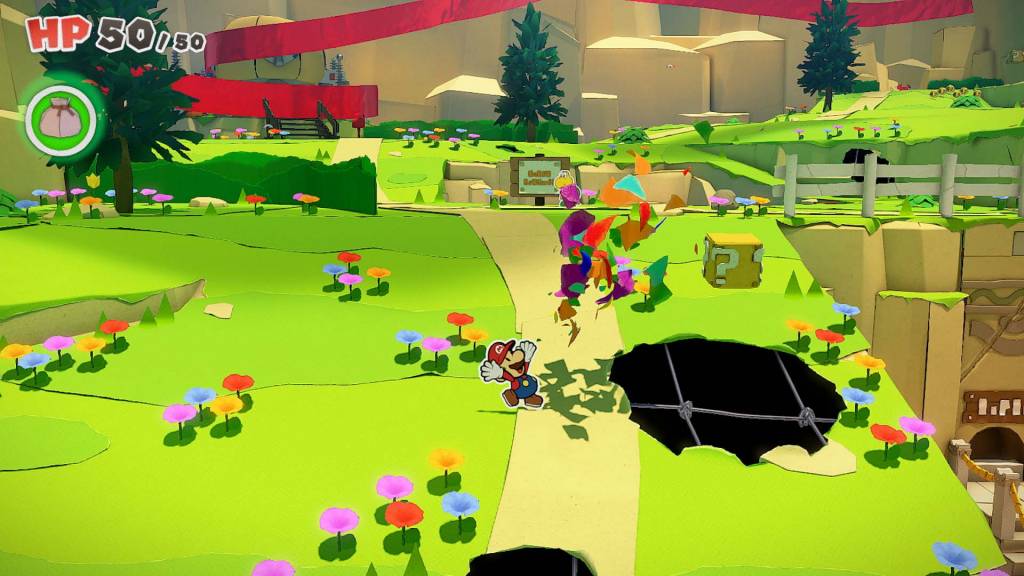