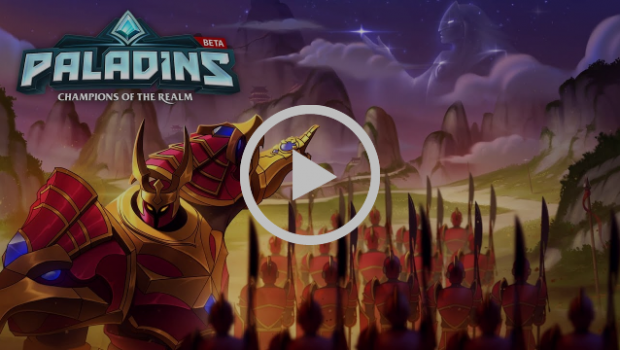 March 23rd, 2018 – Melbourne – For centuries, Jenos was one with the stars. Now, the celestial god has returned — and the Magistrate will not rest until he joins their armies.
The Siege of Ascension Peak event starts soon, giving Paladins players a new map, new limited-time game mode, an incredible array of new skins and, soon, a new Champion. This is Paladins’ first ever in-game event, and the game’s largest ever content update. Players take part in the Siege on Paladins’ newest map: Ascension Peak. Home to the Tau-Kor Monastery, it was here that Jenos found the secrets in the stars and became one with the cosmos.

Players can experience the Magistrate’s assault in the Siege of Ascension Peak, a limited-time game mode that captures the hectic battle. Players take the side of either the Paladins or the Magistrate, then do battle with drastically reduced ability cool-downs as they dodge explosives raining from above.

The event also includes new skins and emotes, highlighted by the Soul Eater Jenos skin. Soul Eater Jenos will only be available during this event, and is free with the purchase of three new skins introduced with the event: Academic Skye, Demon Hunter Zhin, and Jade Priestess Seris. Each skin comes with free bonus content.

Paladins’ newest Champion, Khan, will be released in the following patch. This General of House Aico is a vicious new Front Line champion, currently leading the Magistrate’s forces in the Siege. Siege of Ascension Peak will be introduced in patch OB68, releasing March 28 on PC and April 4 on Console. This patch will also kick off Season 2 of ranked Paladins gameplay. Season 2 changes include extensive balance changes, a new 2-ban system, and a ranked ladder reset.Players will re-qualify for the ladder, where new rewards await, after just 10 placement matches.