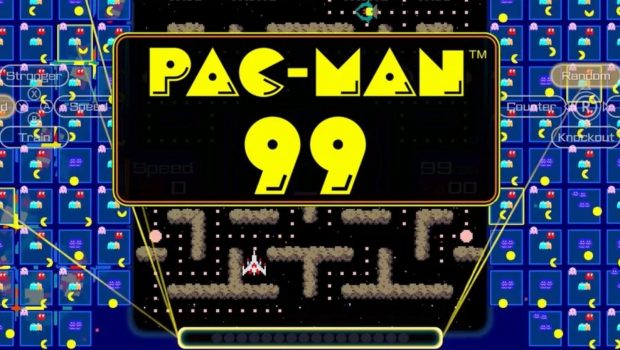 Summary: Pac-Man can run but cannot hide. So, he just keeps running… and eating.

Pac-Man 99 is Pac-Man true and pure. The same snappy quick turning “just one more” nature of the game is intact. However, just like all “99” games it is a battle royal with a twist. Clear your screen and send enemies and other disruptive obstacles onto an opponent’s screen. No story to speak of so let us get into the graphics. 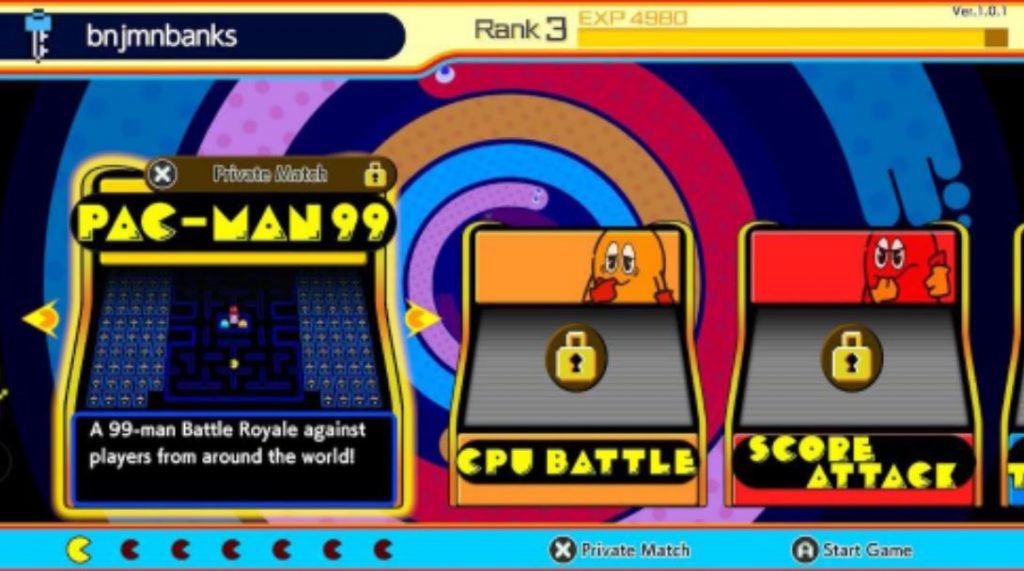 Pac-Man looks retro with a modern take on the visuals. The game still features flat 2D graphics but somehow still pop off the screen a bit. It is quite easy on the eyes thankfully because that is what you are mainly focusing on during your many hours of play. The left and right borders on of the screen are full of crazy neon lights, rapid animations and all matter of eye candy happening. Also, that is where you can see your opponents. To be honest it is a bit much and can be distracting but that adds to the game, I think. I am happy they went with 2D Pac-Man and not the 3D version. 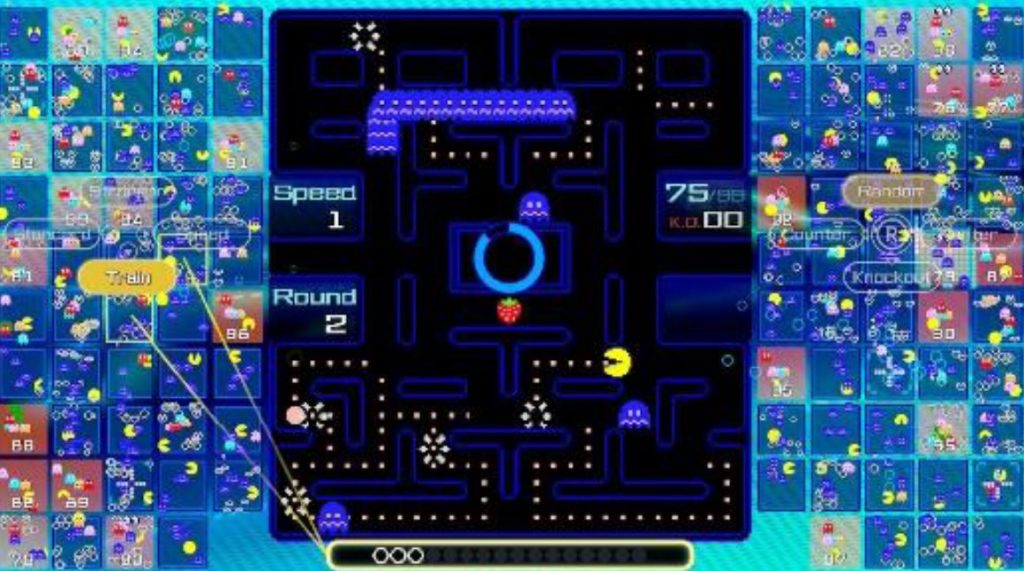 Now let us talk about the audio. Its crisp and will instantly remind you of the arcade. With sounds reminiscent of pinball machines with the different sounds for bonus points and high scores. As you munch your way around the stage you hear the oddly soothing sounds of Pac-Man snacking on pellets. You also hear the quirky sound of ghost trying to stop your feasting. Then your Pac-Man devoirs a Power Pellet and you chase the frighten ghost. Then you eat one… and the screen pauses every time you send a ghost back to the revival box. All of it sounds crazy and chaotic. The audio is simple but layered on top of each other is enough to fill out the Pac-Man 99 feel. 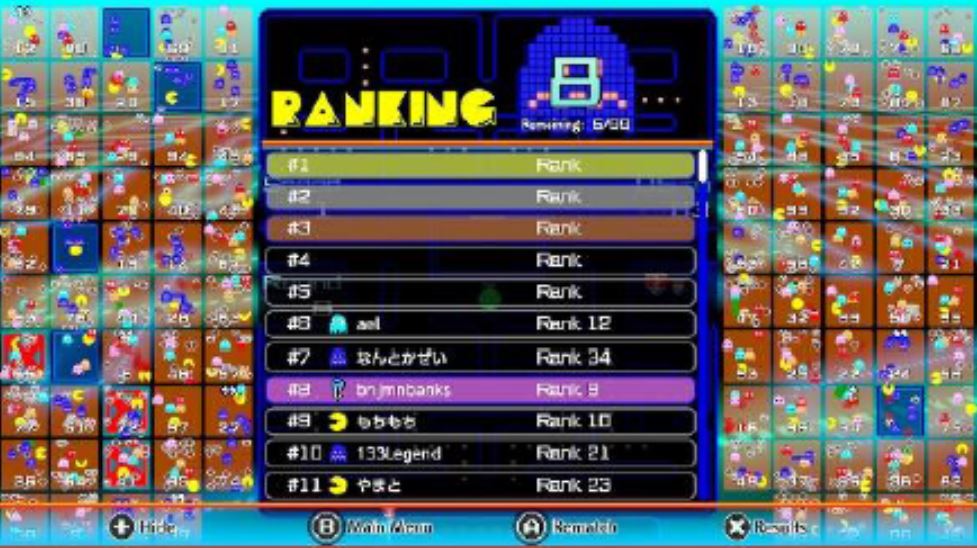 Gameplay… oh the gameplay, it is maddening. You will want to slap things around, cry and fuss like a child. You will not be able to stop playing, no matter how hard you try. Every time you lose you seem to do a bit better you seem to step it up just a bit. That is because the old navigating a grid like maze is the same, but the 99 is what we are here for. You go up against 98 other people online. The goal is to simply outlast everyone else. Sounds easy, but it is not. The other players are constantly dropping obstacles on your screen. 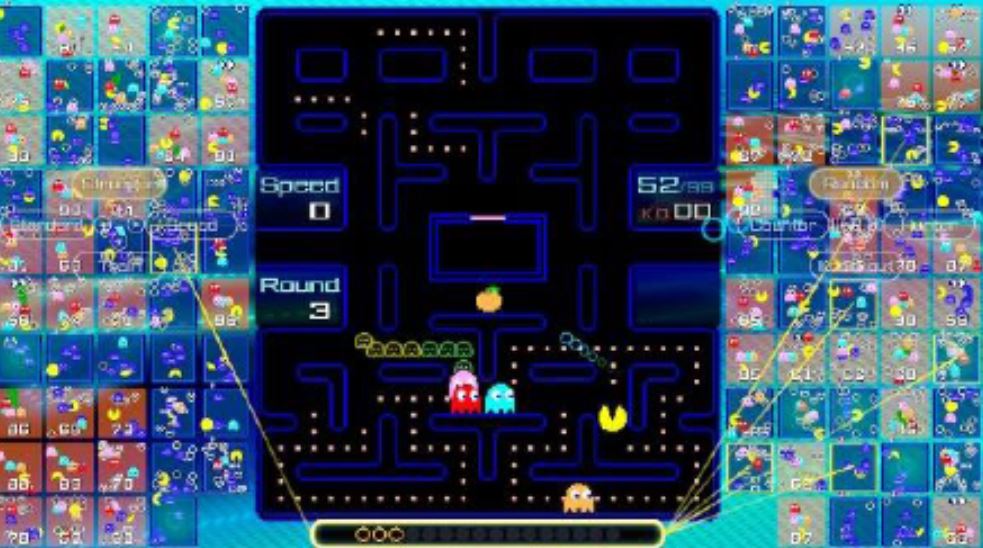 White Jammer Pac-Men that slow you down and the Red Jammer Pac-Men will move about the screen and will be instant death if touched. The ghosts are still chasing you while you try to keep your wits about you, but you are not left defenseless. You have a Strong, Speed, Train and Standard power ups. These are activated by selecting Up, Down, Left and Right on the left thumb stick. Eat the Power Pellet while having one of those power ups selected and it will activate. Strong will send more Jammers to opponents but the Power Pellet duration is decreased significantly. Speed will send less Jammers but allows you to move faster. 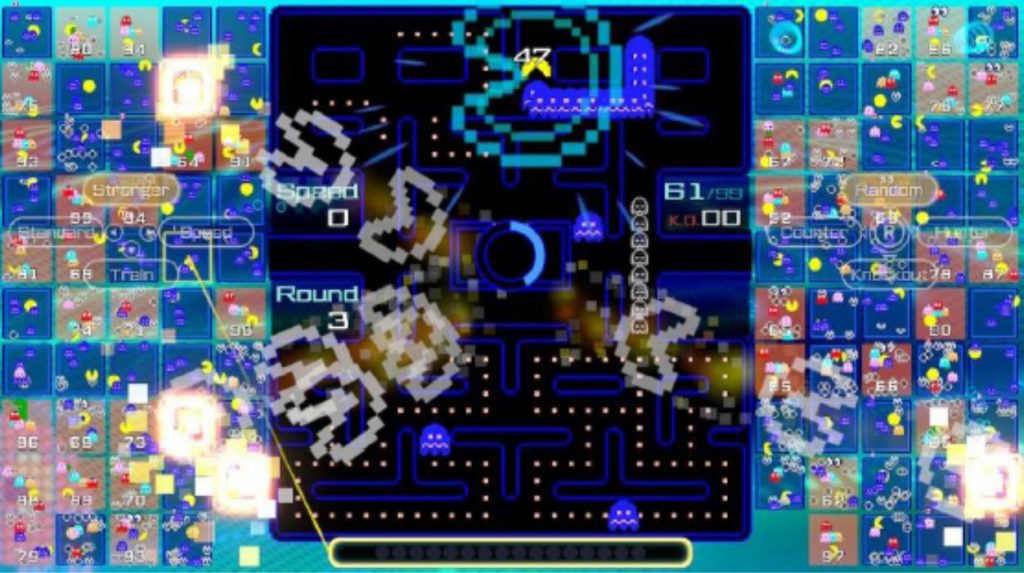 Train extends the ghost trail as you eat allowing you to chain together a longer attack, but it also leaves Jammers on your screen. Standard does the normal damage, keeps you at the normal speed and the Power Pellet duration is normal.
That is not all! You also have play styles controlled by the face buttons. Random, Hunter, Knockout and Counter. Random switches randomly amongst the other three randomly. Hunter attacks the current KO leader. Knockout attacks players closest to being KO’d. Counter will try to counter attacks directed at you hopefully keeping your screen less packed with Jammers. 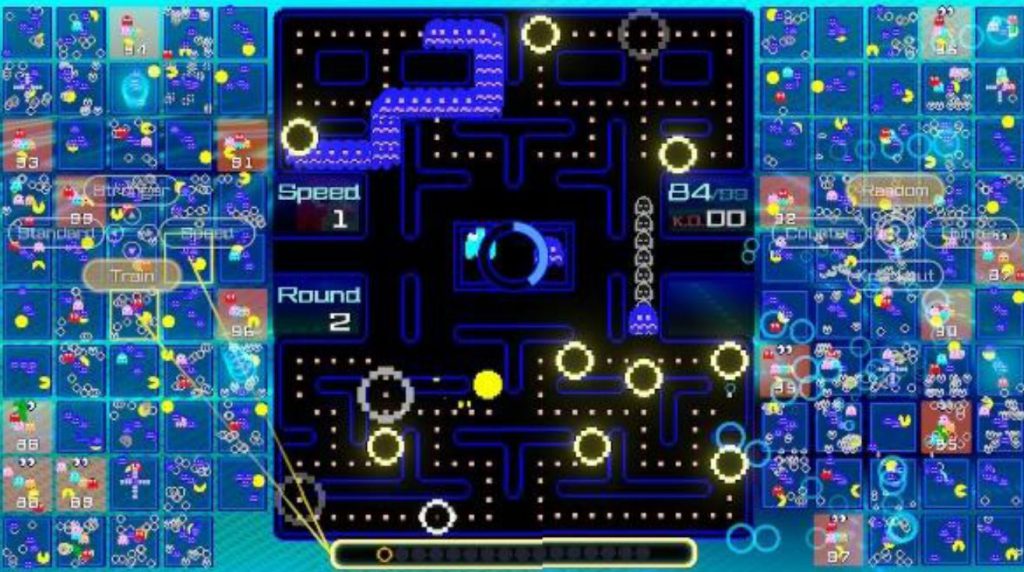 To summarize it all. Pac-Man 99 is my favorite of the Nintendo battle royals (Goodbye to Mario 35). It is fast paced; it is fun, and it is addictive. You will catch yourself turning a 10-minute quickplay into a 2-hour power run to be the champion. It may get repetitive as these types of games tend to do, but if you enjoy Pac-Man and miss arcades and high score competitions then please try it. Remember its free… sort of.

On the Nintendo eShop you can buy cosmetic changes to the stage and backgrounds, but you can also unlock the 3 other modes. CPU Battle – Compete against 98 CPU players. Score Attack – Beat the high score. Blind Attack – Clear the stage before time runs out. Extra content but not worth it unless you really want those modes. Price depends on your region. 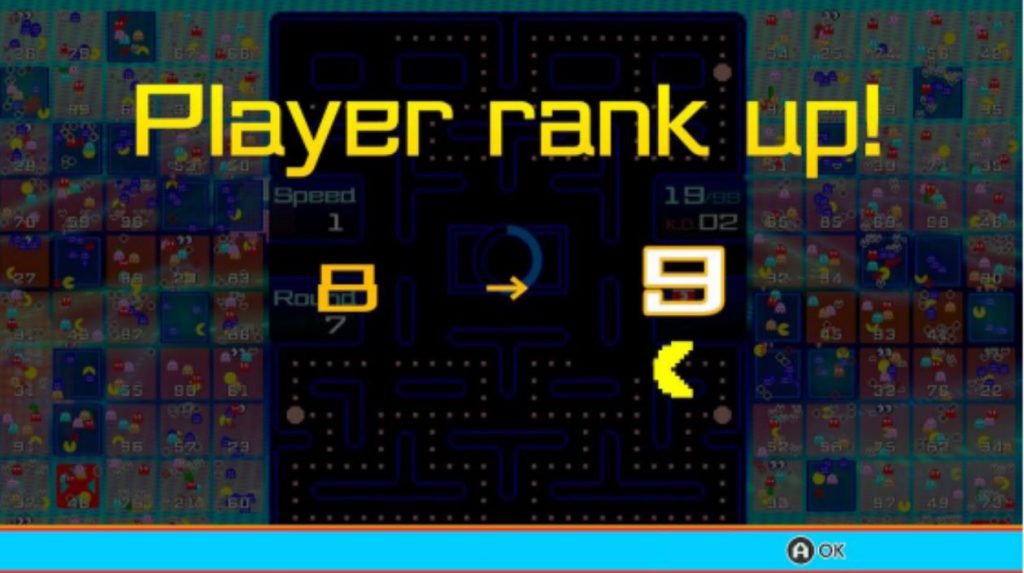