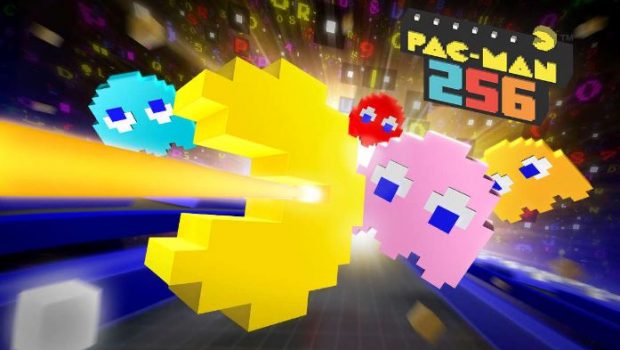 BANDAI NAMCO Entertainment’s most famous character that has transcended generation after generation of gamers is back on console and PC systems! BANDAI NAMCO Entertainment Europe today announced that the highly acclaimed PAC-MAN 256 mobile game is now available digitally on PlayStation®4 via the PlayStation®Network, Xbox One via the Xbox Games Store and PC through Steam.

Developed by Hipster Whale and 3 Sprockets, PAC-MAN 256 allows fans to play the award winning mobile game on console with new features exclusive to the console and PC versions. In addition to the social sharing option and 10 themes unlocked, you will be able to play solo or with up to 4 friends via the local co-op multiplayer mode.

Players will have to work together to eat all PAC-DOTS & Power Pellets, and stay ahead of the super villain from the mobile version: the 256 Glitch. All the notorious ghosts and a new gang of revived retro-ghosts including Sue, Funky and Spunky will pursue our beloved yellow 80’s icon. Fans can outsmart them with over 20 crazy power ups: Lasers, Tornadoes, Giant PAC-MAN and much more.

PAC-MAN 256 is now available on PlayStation®4 via the PlayStation®Network, Xbox One via the Xbox Games Store and PC through Steam and for a suggested one time price of €4,99*. Don’t hesitate to check out the launch trailer.