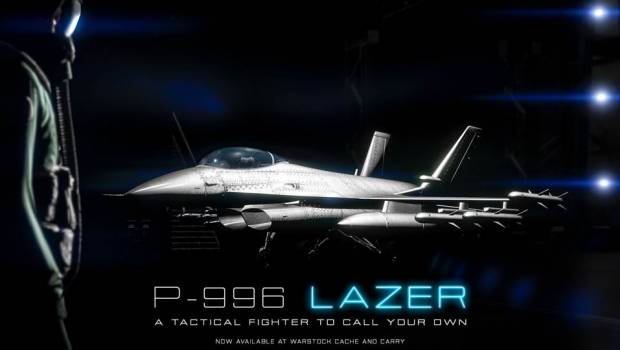 It feels like just yesterday: boosting a hypercar and hitting the freeway north, taking the dirt ramp with enough speed to somersault 200ft over the rear fence of Fort Zancudo while dodging small arms fire to commandeer a Lazer… and often getting a 120mm shell inserted firmly up your intake for your troubles.

If you’ve been looking for a more legitimate way to acquire the P-996 Lazer and store it along with the rest of your Hangar’s squadron, or have it delivered via Pegasus Lifestyle Management, this legendary fighter jet is now available compliments of Warstock Cache & Carry.

Prepare for a whole new barrage of community generated concoctions to tackle as we’ve added a heap of new props and checkpoints to the Race Creator tool along with the ability to make your very own Transform Races. Keep an eye out on Social Club for brand new Jobs from the clever and talented GTA Online Creator community, making use of giant inflatable gates, colossal new Air Tubes and newly available vehicles for the Transform Race Creator like the Pegassi Oppressor.

If you hit the Black Friday sales hard last week, we’ve got some good news for your wallet. Starting today and running through December 11th, there’s Double GTA$ & RP on a huge spread of activities in GTA Online:

In addition, Gunrunning Research and Manufacturing is 25% faster through December 11th as well, so you’ll be able to push more product across Southern San Andreas and grab more bang for your buck while you do.

Whether you do your business from your bike saddle or the boardroom, there’s plenty of discounts happening in GTA Online. Through December 11th, get 25% off the following:

Get on the fast track with upcoming Premium Races and Time Trials: