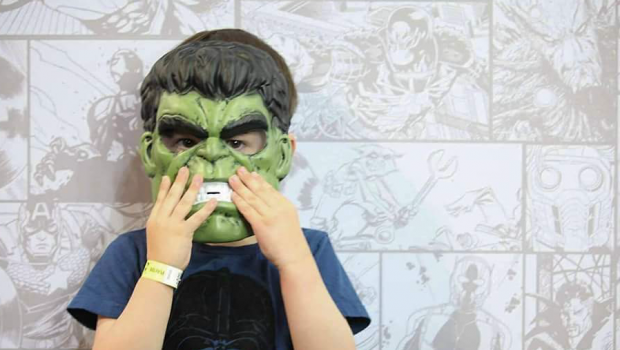 SURVIVING A CONVENTION WITH YOUR KIDS – OZ COMIC-CON 2017

Comic conventions are always a massive undertaking, with an exhaustive list of things to do and see. For many, the mere thought of taking the kids along induces cold sweats and a twitching eye. Never fear fellow geeky parents, comic conventions ARE in fact the perfect place to take your little padawans along for an epic day of outright geeky madness!

I come from an incredibly geeky family, and over the years I have developed a deep love for multiple fandoms, all that I adore with an intense passion. Going to conventions is a way for me to relish in the things I love, allowing me indulge, enjoy my hobbies and connect with the people who created these fandoms. Now that I have my own little geeky family, I can now finally share these experiences with my kids and enjoy the other side to going to conventions. 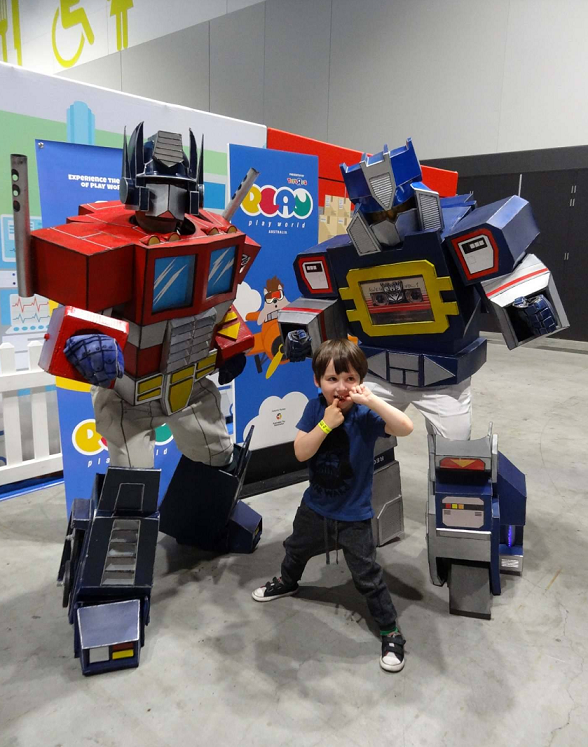 Recently, I’ve had a few people come to me, seeking advice and asking questions about taking children to comic-con. My son, Oscar, who is nearly four-years-old, is no stranger to going to conventions, already clocking up a grand total of eight. My one-year-old daughter is also familiar with going to comic and gaming conventions, and I had friends stare at me, mouth agape and utterly horrified that I took her when she was only two-weeks-old to her first comic-con last year…piece of cake, I say!

Over the weekend, the iconic Oz comic-con returned for its fourth year in an all-new location at the International Convention Centre (ICC), with all manner of worbla-clad, saber wielding fans descending on Darling Harbour for this epic two-day event. So, this year I decided to do something a little different with my coverage of Oz comic-con, focusing instead on my son’s experience, looking at the things he did and all the child-friendly activities that were available.

There is so much to see and do for children of all ages, celebrating a diverse variety of geeky delights ranging from comics, movies, television, gaming, books, anime and cosplay. There are also countless workshops, interactive exhibits and a brand new dedicated kids space that encourages imaginative role-playing! In short, it’s buckets loads of fun for the whole family!

I should probably introduce my son Oscar. He’s like any typical four-year-old, with intense passions and love for things beginning to form and flourish. Luckily for us, he is leaving behind the world of Cars and Lightening McQueen, and embracing new and exciting fandoms instead. He has an intense love for Transformers, Adventure Time, Gundam, Lego, Thunderbirds, Star Wars, Minecraft, Batman and has a strange and peculiar obsession with goblins and vampires. Recently, we’ve noticed that he is finally beginning to form his own taste and preference for things, coming up with his own likes and dislikes, which we as a family embrace and encourage. In summary, he’s a quirky little weirdo who is particular about most things in his life. Going to comic-con with Oscar is always a fun and ever-entertaining experience, sometimes hard but mostly easy. 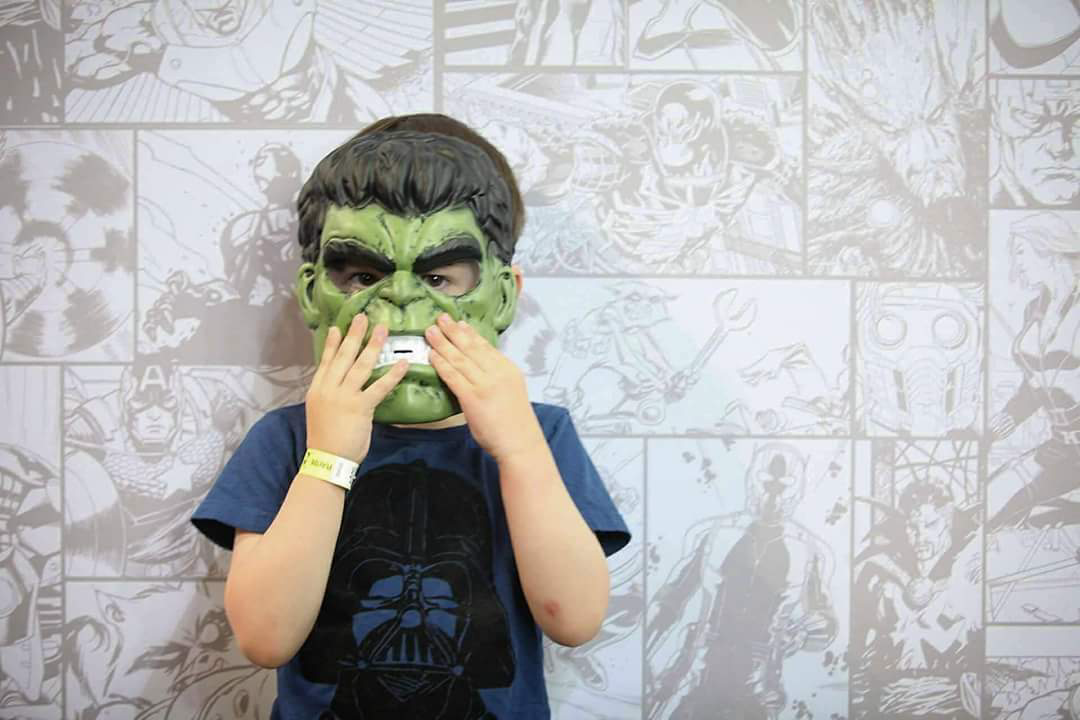 We arrived at the ICC early, around 9:30am, so as to get in with the kids to do as much as possible, whilst they were still fresh…nothing worse than a tired and cranky child at a comic convention. Once inside we decided to walk around the showroom floor first, to familiarise ourselves with the new layout. We quickly came across the Star Wars exhibit, which had a full-scale Resistance X-Wing Fighter! *swoon* There was an excellent interactive droid display, where kids could play with and control an electronic BB-8, R2-D2 and BB-9E. There was also a littleBits exhibit, which encouraged kids to make their own unique droids using electronic blocks that connect together like Lego. Oscar loved being shown how to connect circuits to make loud buzzing noises and turn on and off lights. This exhibit was so much fun, and seeing such a large gathering of padawans sharing their love for Star Wars was heart-warming. 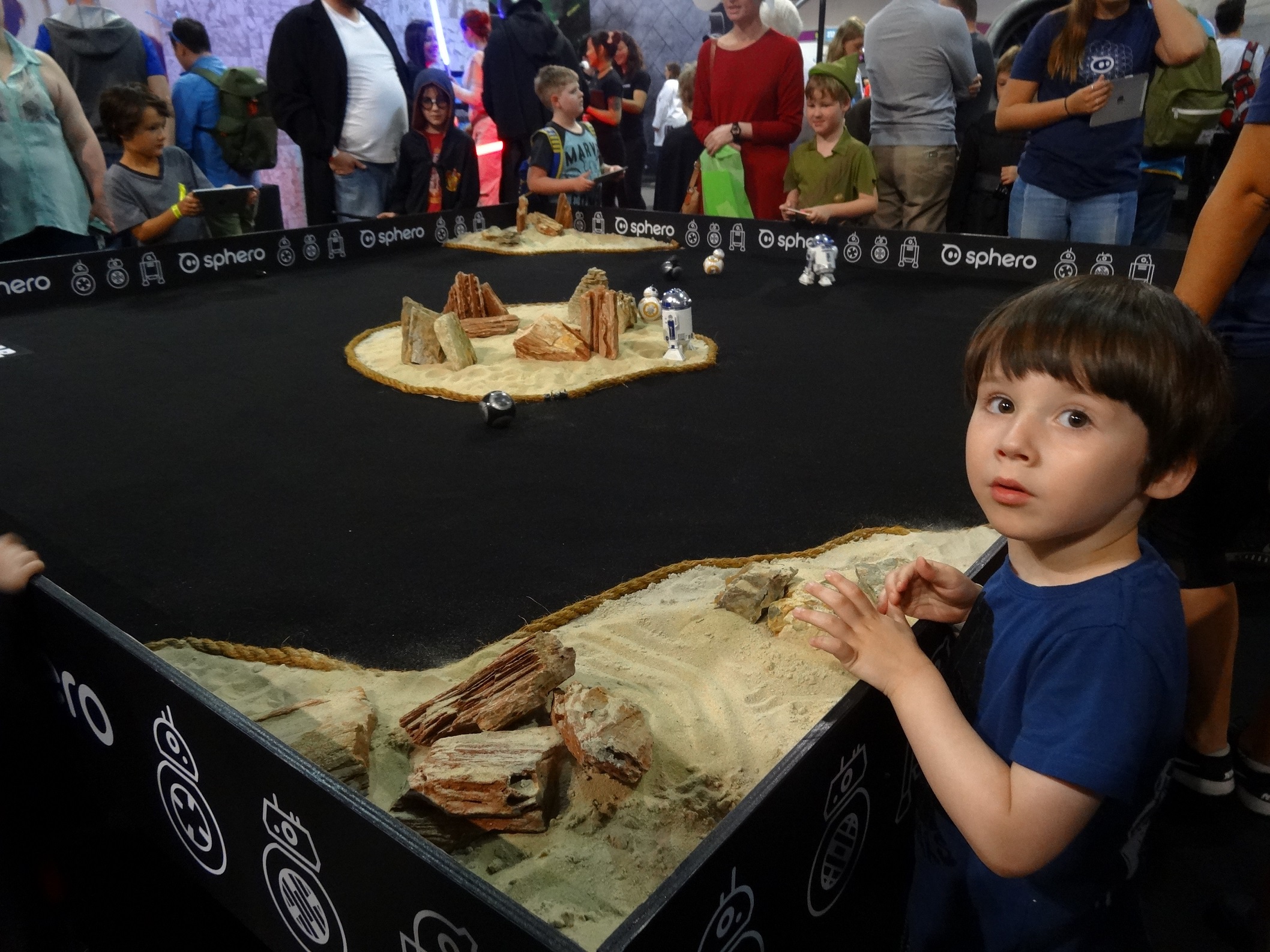 After some time spent at the Star Wars exhibit, we decided to move on, where we checked out a variety of retailers on the showroom floor, who were selling all sorts of goodies. Lego, robots, props, swords, games, comics…you name it, it’s there. We got stuck at an insanely good Lego exhibit, where Oscar drooled over the Ghostbusters Firehouse. The only problem was explaining that these pieces weren’t for sale and we couldn’t take them home…bummer! We also got stuck at an exhibit selling play clay, where Oscar was encouraged to get hands on and make his favourite comic character. Instead, he just rolled the clay in a ball and repetitively squashed it, but he still loved doing it, all the same.

We then decided to do something the parents wanted to do, heading over to the Comic District, where we could check out and see the local and international comic artists. It’s no surprise that we are lovers of comics in our family, and I’m proud to say that Oscar is developing a love for comics as well. Art, comics, superheroes…what’s not to love? Nothing excites young lovers of superheroes more than seeing artists right there physically drawing these characters in front of them. Seeing Nicola Scott was a personal highlight for our little family, as we got to have a chat to her about her work, whilst Oscar flicked through her portfolio, commenting on her drawings. 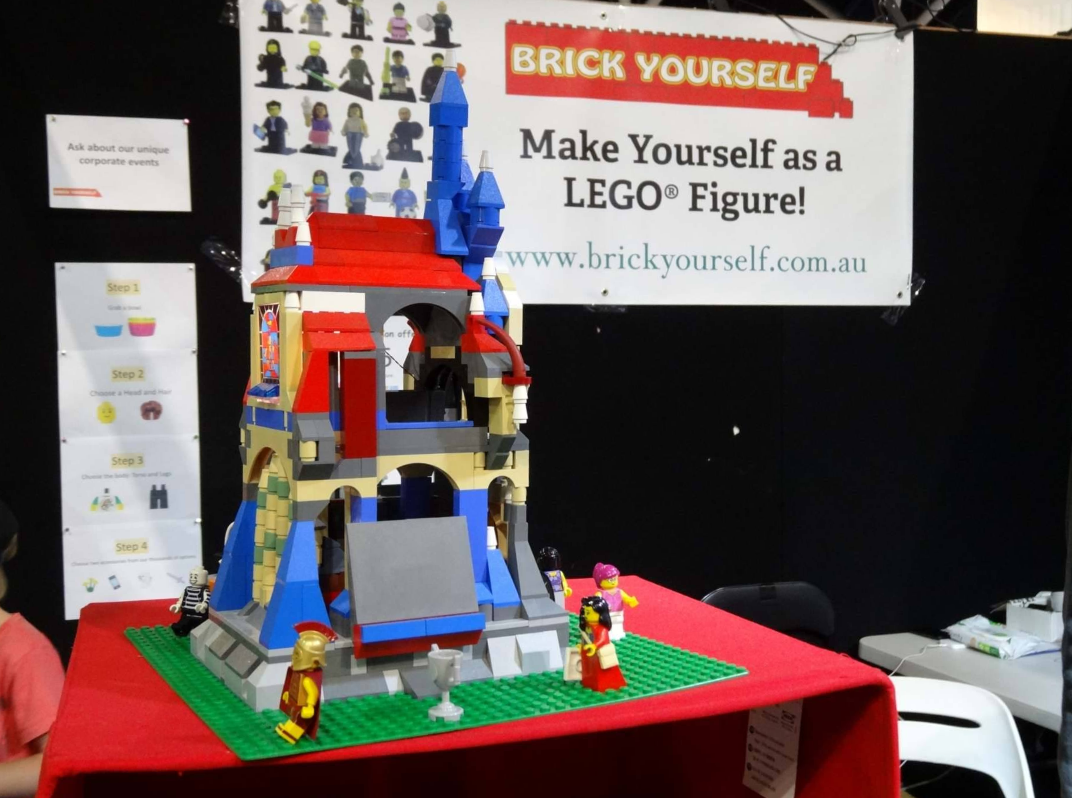 There is also an infectious energy buzzing around the showroom floor at conventions, as a diverse range of colourful cosplayers walk around and mingle. Three words: KIDS LOVE COSPLAY! On arrival, Oscar made a beeline towards two cosplayers dressed as Optimus Prime and Soundwave. They stood there sentinel, like two giant kid magnets, patiently posing for photo after photo. There are always so many Batmans, Spidermans and Deadpools, and no matter how many times we saw one, Oscar always pointed them out to us in a gleeful voice. There was also an excellent Gambit and a female Cable that caught his attention, with Oscar falling in love with Cable’s epic gun. Not all cosplays excited Oscar, with giant a Pikachu and a group of people decked out in military camouflage suits inciting a deep sense of fear within the little guy.

I should also mention Oscar’s personal highlight, which was the Play World Family Room. This space was sectioned off, allowing kids to role-play, draw and create, whist the parents could take a break and sit down. Kids were exploring all the different kinds of things to play and do in the area, with Oscar gravitating towards the grocery shopping, kitchen and construction site areas. There were also costumes available for kids to dress up in, with my daughter dressing as an interesting faerie hybrid. What I found interesting about this area, was the fact that the exhibitors wanted parents to fill in a questionnaire about what their kids are interested in and what toys they liked the best, with the intention of forming a whole exhibition level dedicated to kids to coincide with next year’s comic-con. How excellent! 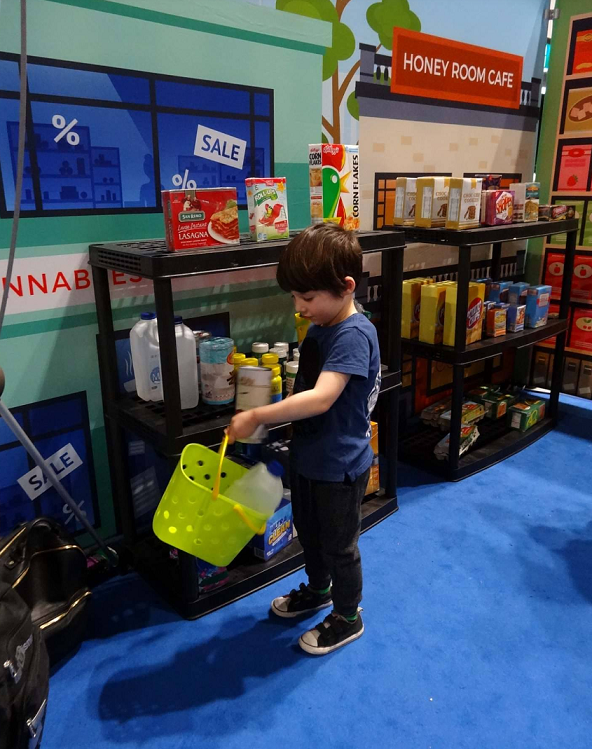 After leaving the play area, it started to become obvious that the energy levels were beginning to become depleted amongst the ranks, as we were reaching the end of our day. Time to go home, relax and reflect on what we loved the most about our exciting day. Comic-con is 100% doable with kids, and in fact they make it a much more fun and interactive experience. If you have kids and have never taken them to comic-con for fear of the stress it may induce, please take the plunge and buy tickets to the next one and go along! It’s a safe space for everyone, welcoming people from all walks of life.

10 TIPS FOR SURVIVING COMIC-CON WITH YOUR KIDS:

1. Go early. If I’m taking the kids, I always go to conventions as early as possible. You’ll get a better chance of avoiding a long line to get inside, as it’s best to tackle the day with fresh and well-rested children.

2. Pack food and stay hydrated. Yes, there is food available, however, I always find that it’s overpriced and greasy. It’s handy to have snacks on hand as well. Don’t forget to take your water bottle, as a lot of walking is done throughout the day and it’s common to get hot inside.

3. If dressing up, pick a costume wisely. This is really important, as there is nothing worse than having an uncomfortable child, complaining about the costume they are wearing. A change of clothes is also a good idea.

4. Don’t over-promise and set a budget. I find that if you’re planning on buying a memento for the day, it’s best to talk about this before hitting the showroom floor, because I can guarantee that your child will want most things they see. It’s also easy to become overwhelmed with all the toys and exciting exhibits on show, so I tend to focus on something from their favourite fandom to help focus their attention.

5. Plan and structure your day. Look at the timetable, and mark out where you want to go and what you want to see. I’m someone who tends to do a bit of research before going to conventions, as I like to know what I want to see and do, and this applies to my kids as well.

6. Be flexible and relax. If things don’t go to plan, try not to stress. Sometimes the queue is just too long, or you missed out on seeing your favourite actor talk in a panel. Don’t stress, as there is always so much more to see and do.

7. Try and avoid lines. This is a quick way to a whingy kid, or an epic tantrum. If I see a long queue forming at a popular exhibit, I’ll avoid it like the plague, divert my son’s attention and instead focus on another cool thing to do instead.

8. Remember your camera. There will be countless moments that you’ll want to capture on camera, and you’ll be kicking yourself if you forget to bring it along for the day. Also, don’t forget to charge it!

9. Bring a stroller. Strollers are a must! They are amazing to take to conventions, as you can dump bags on them and then pop a tired child in them when they no longer feel like walking. Win!

10. Listen to your kids. It’s so easy to get carried away with the hustle and bustle at comic-con. If your child wants to eat, whip out some snacks. If they want to sit and have a play, take a seat and try and relax. If they are tired and ready to go home, then it’s time to either have a break or pack up and head home. The main thing is that everyone is relaxed and enjoys themselves. 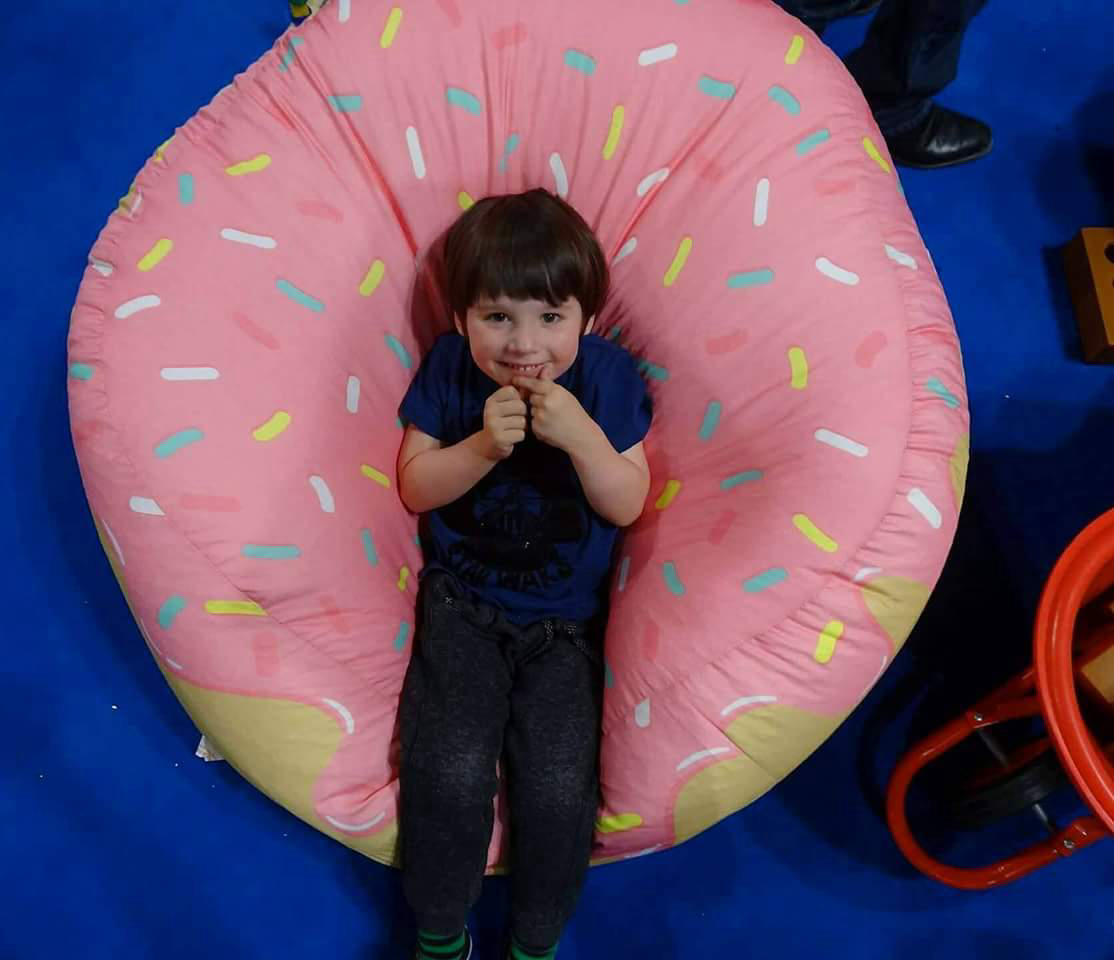 Oscar had an absolute blast!