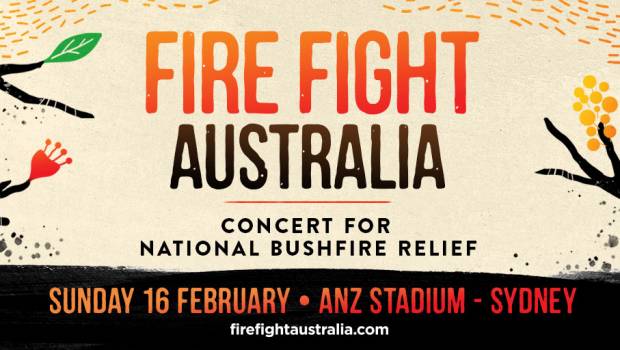 TEG Dainty and TEG Live are thrilled with the national response to FIRE FIGHT AUSTRALIA (#FireFightAustralia) with an astonishing 65,000+ tickets sold in under 5 hours.  There are now limited tickets remaining for the concert via Ticketek.

Due to such overwhelming demand, the promoters are now working with the venue, ANZ Stadium, to release as many tickets as possible to drive total sales well over 70,000.

FIRE FIGHT AUSTRALIA has generated unprecedented national interest with fans from all corners of the country securing tickets in a true sign of solidarity and support for the bush fire relief.

All concert ticket profits and all contributions through Ticketek will go towards key organisations providing vital “Rescue”, “Relief and Recovery” and “Rehabilitation”.

Fans can also donate to bushfire relief through www.firefightaustralia.com.

Ticketek Australia is the only authorised seller of FIRE FIGHT AUSTRALIA tickets. Do not pay more than the prices listed for your tickets.

Collectively, this all-star list of performers has sold approximately half a billion records. The 9+ hour concert offers fans a unique opportunity to witness some of the most influential and successful songwriters of all time, all on the one stage and in support of national bushfire relief.

FIRE FIGHT AUSTRALIA will be hosted by writer, actor and comedian Celeste Barber, who has already raised more than $50 million towards bushfire relief through her own record-breaking online appeal.