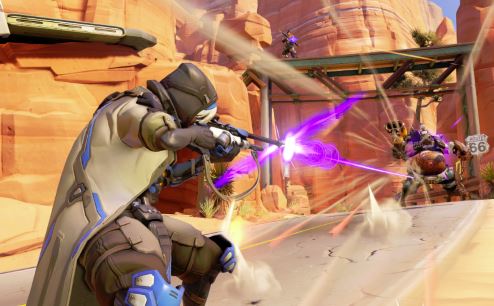 New Overwatch hero, Ana Amari, has been available for testing on the Public Test Region (PTR) since her official reveal last week. We are excited to announce that she is now live and playable for all Overwatch PC players, and comes at no additional cost.

Ana is a sniper support, and uses her versatile arsenal to affect heroes all over the battlefield. Her Biotic Rifle rounds and Biotic Grenades heal allies and damage or weaken enemies. Her sidearm’s Sleep Dart, tranquilises key targets for five seconds, allowing Ana to escape combat or counter enemy abilities. Her Nano Boost Ultimate skill gives one of her comrades the ability to temporarily move faster, deal more damage, and take less damage from enemies’ attacks.

Ana is an elite Egyptian sharpshooter, and was one of the founding members of the original Overwatch task force. During a secret mission to evacuate civilians from a dangerous situation, Ana was met with another world class sniper. When confronted face-to-face with the other assassin, she finds out an unsettling truth about the identity of someone who was once a friend, but has now turned foe. For more information watch the Ana origin story video here or read our latest free digital comic, Legacy here.

For more information about Ana, and to see our latest patch notes, please visit the Official Overwatch forum post here.