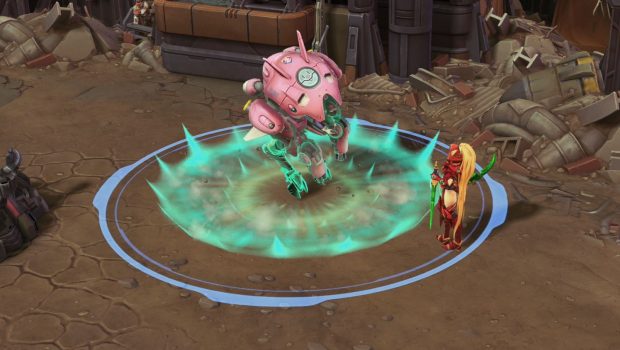 Hana Song, better known as “D.Va,” is both a world champion professional gamer and a burgeoning global icon. As a member of South Korea’s elite MEKA unit, she fights to protect her homeland from the colossal omnic threat lurking within the East China Sea. D.Va is making her debut on the Heroes of the Storm Public Test Realm (PTR) today!

D.Va has two modes: Mech Mode and Pilot Mode. When her Mech is destroyed, she is ejected after 0.75 seconds and can continue to fight out of her Mech. In Pilot Mode, each Basic Attack she deals reduces the cooldown of Call Mech by 0.5 seconds. While on foot she can use a mount to get around the map quickly. In Mech Mode, D.Va can shoot while moving, but her movement speed is reduced by 15%. Her Mech Mode Basic Abilities include: Defence Matrix, which channels a defensive field for 3 seconds, reducing the damage dealt by enemy heroes inside it by 75%. Damage dealt to the Mech by enemies within the Defence Matrix still grants Self-Destruct charge. D.Va also has Booster, which increases her movement speed by 125% for 2 seconds; enemies that are hit while boosting take damage and are knocked away.

When D.Va is in Mech Mode and her Self-Destruct has charged, she can eject from her Mech which will explode after a 4 second delay, dealing medium to massive damage in a large area, radiating from the centre of the blast. Her Mech also gains 1% charge for every 2 seconds spent using Basic Attacks, and 30% charge per 100% of Mech Health lost, to build her Self-Destruct ability. When out of Mech, D.Va has the ability to call in a replacement suit and enter Mech Mode on a 45 second cooldown. D.Va’s Heroic Abilities include Bunny Hop, which requires her to be in Mech Mode, and makes her Unstoppable, stomping every 0.5 second, dealing damage, and slowing enemies by 40% for 4 seconds. Her second Heroic Ability, when in Pilot Mode, is Big Shot, which deals damage to all enemies in a line. Call Mech’s cooldown is reduced by 8 seconds for each enemy Hero hit.

D.Va is a versatile tank, and opponents will quickly find out that this superstar and her Mech make a powerful combination. Nerf this!

If you would like to request a D.Va unlock code for use once she launches, please let us know.

Week three of the Nexus Challenge 2.0 event is now available! Players who took part last week earned the Officer D.Va skin for Overwatch, and a Busan Police Hovercycle Mount for Heroes of the Storm. This week, players who complete five games with friends will be rewarded with an Overwatch Nexagon Heroes of the Storm mount, a D.Va spray, portrait and banner in Heroes of the Storm, and a D.Va spray and player portrait in Overwatch. A new quest unlocks each week, but don’t worry if you haven’t started yet, as there’s still plenty of time to earn the rewards on offer! For more information about the Nexus Challenge 2.0 and digital items up for grabs, visit our blog post.