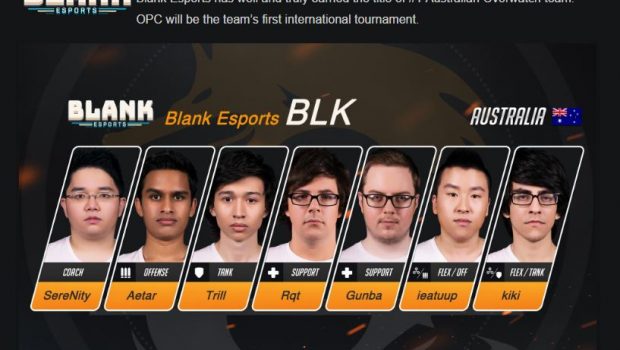 The Overwatch Pacific Championship (OPC) is heading into its third exciting week, with eight more rounds to go before the Playoffs! Australian team, Blank Esports, has performed exceptionally well so far, and currently sits in first place on the ladder! Watch the Aussies take on Hong Kong Attitude tonight (Friday, 21 April) from 9:00pm AEST/11:00pm NZST. Blank Esports will also battle against Japanese team, SunSister, on Sunday, 24 April at 9:00pm AEST/11:00pm NZST. These matches, as well as the rest of the OPC round, will be streamed live at https://www.twitch.tv/fullcircle. Fans can also watch the Taiwanese stream via goblizzard.tw/esports/live.

The Season One prize pool is NTD$8.3 million (Approx. $357,000 AUD) with eights teams from around the Asia Pacific region vying for victory! Don’t miss a minute of it!

For an in-depth look at the OPC and rules of the tournament, please visit the Overwatch website.