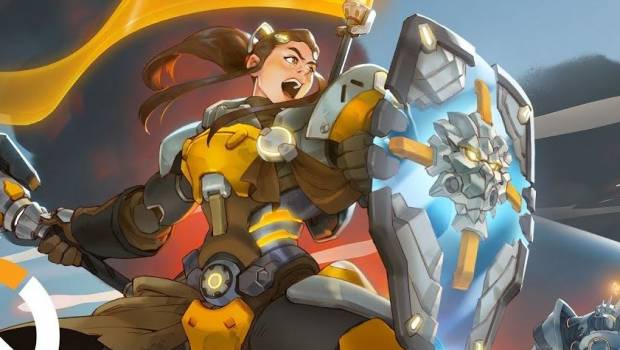 “I will prove myself!”

No longer sitting on the sidelines, Brigitte Lindholm has taken up arms to defend those in need of protection.

The daughter of weapons designer, Torbjörn Lindholm, Brigitte was the first of his children to show an interest in mechanical engineering. Brigitte spent much of her spare time in her father’s workshop, learning the trade and honing her skills. Her aptitude for engineering mirrored that of her father, but Brigitte’s primary interest was in armour fabrication and defensive systems, unlike Torbjörn, who was world renowned (and perhaps infamous) for the weapons he created.

Brigitte specialises in armour and defense. She can throw Repair Packs to heal teammates, or automatically heal nearby allies when she damages foes with her Flail. Her Flail is capable of a wide swing to strike multiple targets, or a Whip Shot that stuns an enemy at range. When entering the fray, Barrier Shield provides personal defense while she attacks enemies with Shield Bash. Brigitte’s ultimate ability, Rally, gives her a substantial short-term boost of speed and provides long-lasting armour to all her nearby allies.

Brigitte is now live in the PTR! To learn more, please visit: https://playoverwatch.com/en-us/heroes/brigitte

Overwatch is about fighting for a better future. Inspired by the game’s message, a group of players based in Latin America have created an initiative, EcoPoint Brazil, in order to give back to their local community.

Our Latin American team has published a video interview with Overwatch game director, Jeff Kaplan, discussing the amazing work done by the EcoPoint Brazil team. It’s a powerful message that we’d encourage you to take the time to look at and share: https://www.youtube.com/watch?v=V7FWKTDuQvM