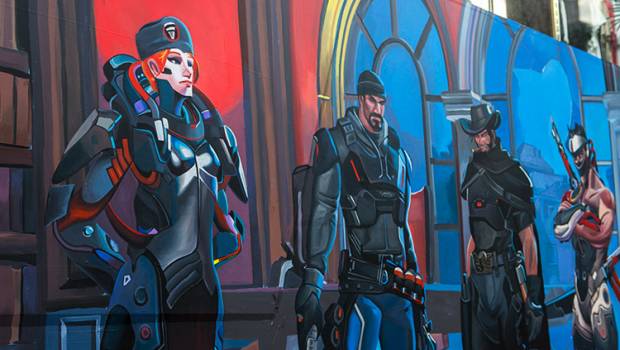 To celebrate the launch of Retribution, Blizzard partnered with Apparition Media to create a dynamic artwork every bit as mysterious and shadowy as the agents of Blackwatch.

On 26 March, eagle-eyed Overwatch fans in Melbourne, Australia, noticed a mysterious mural appearing on the corner of Swanston St. and Lonsdale St. Featuring Genji and McCree in front of a seemingly innocuous backdrop, it was clear something was missing from the piece…

Before the paint was dry, internet sleuths were already hard at work attempting to decipher the meaning behind the art. In the days to come, the mural was updated, with characters changing skins and new characters appearing, culminating in the final art you can see today.

The mural fades back into the shadows today, but with Overwatch Archives now in full swing, we’ve created a video detailing the process to create this stunning, dynamic piece of art: