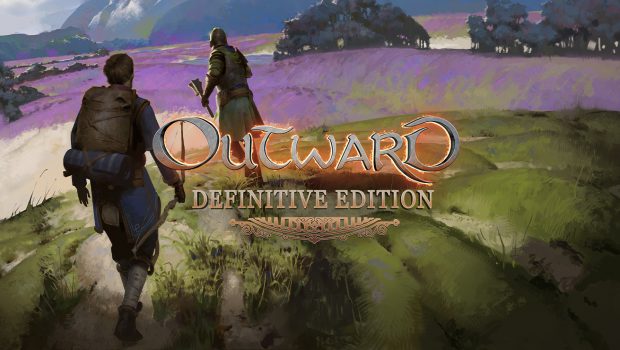 Summary: An ambitious game that punches above its weight with unique RPG systems, survival mechanics and co-op support - and a lot of heart.

“No remarkable journey is achieved without great effort!” says the tagline for Outward.

After 30 hours of open-world exploration and dungeon crawling with a friend, filled with unexpected surprises, hardships and rewards, I agree – even if we had to walk everywhere.

The killer offering in this updated version, however, isn’t a new feature at all: This a hardcore role-playing game with full local split-screen co-op multiplayer support, something almost unseen in the genre, and it’s been made even more fantastic with the Definitive Edition’s many enhancements.

Outward is a third-person adventure that blends several action-RPG and survival systems together to offer a smorgasbord of gameplay mechanics and role-playing experiences. There are hunger, thirst, fatigue and warmth systems to tend to, melee, magic and ranged combat to learn, hordes of loot to scavenge, and crafting and skill systems to gradually upgrade through vendors. Food spoils and equipment deteriorates, you can’t fast travel everywhere, and there’s no waypoints to guide you. You also only gain abilities and stat increases through quests or paying for training, rather than traditional XP. Such complexity is initially overwhelming and even a little clunky, but the ambition is alluring.

The story, in contrast, is a grounded and inglorious premise compared to the ‘epic’ approach of other fantasy RPGs; after a barebones character creator, you (and a friend, if you have one handy) start as a humble commoner living in a small village, with a family debt that goes back generations. You apparently survived an expensive sea voyage, and the town gives you 5 days to pay the costs for failure and the loss of the other sailors. You’re quickly let loose into the outside world to solve this urgent problem, and eventually choose from three faction-based questlines as you see fit, with multiple outcomes and dialogue to accommodate your choices and/or failures, and a surprising amount of variation on offer.

For instance, Cierzo (the opening village) can be saved or entirely destroyed depending on whether you fail a certain quest, while your pathway through the main story is unique depending on which faction you choose – the Holy Mission of Elatt (to be free of family debts), the Blue Chamber Collective (to begin a new debt-free bloodline), or the Heroic Kingdom of Levant (to be free of past ties entirely), with a fourth made available through the Soroboreans DLC. Many quests have timers, adding a sense of constant urgency (and curiosity) as to how things resolve depending on your choices, and whether you fail or succeed (or, in my case, choose the wrong dialogue!) 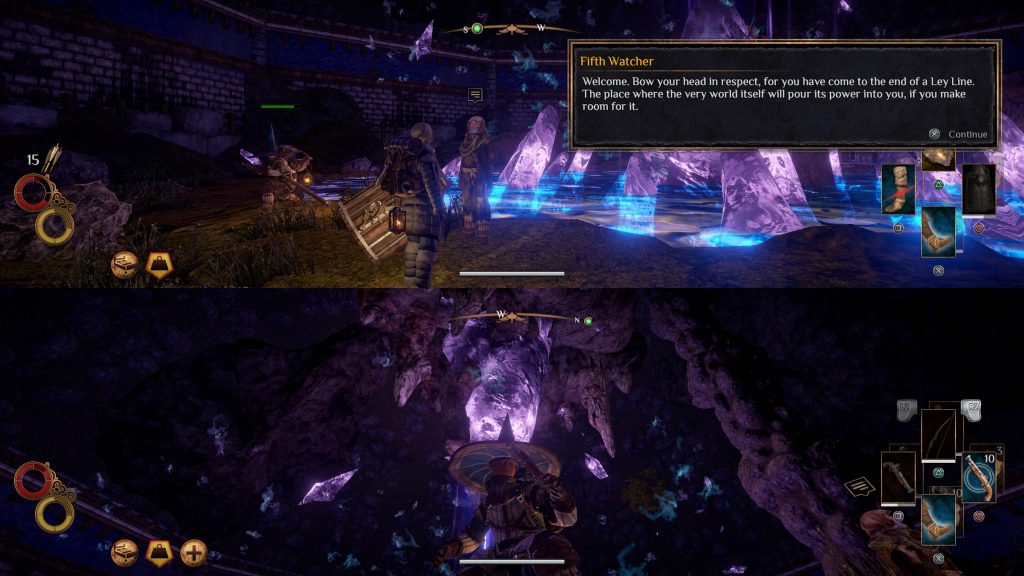 While the presentation of the narrative is nothing fancy, with stilted animations and half-voiced dialogue with static NPCs owing to a small budget, there is charm to the game’s hands-off approach – you can engage with the world and learn its history, or simply focus on the task at hand, because you’re not a hero on a world-changing quest – just a nobody off on an adventure to survive. The implementation of defeat scenarios – randomised outcomes that occur when you die in combat or are captured – also help you form your own unique stories organically.

For example, playing local multiplayer with my brother, we spoke to an NPC inside Vendavel Fortress who was seemingly friendly and offered us a place to stay, only to find ourselves robbed and thrown into a dungeon, where we spent two real-world days trying to escape, losing valuable time. We managed to bribe our way to the supply room, only to be caught and killed. Only, we didn’t die as is typical in other games – we were instead dumped into the ocean, where we washed up, barely alive and freezing, with only one day left to spare to pay off our debt to the village. By the time we returned to extract bloody vengeance, we found there was a whole questline tied to the castle, which we circumvented by being jailed out of our stupidity and driven to revenge. This hands-off approach to quests and exploring means the game is full of these player-made moments, and all the better for it. 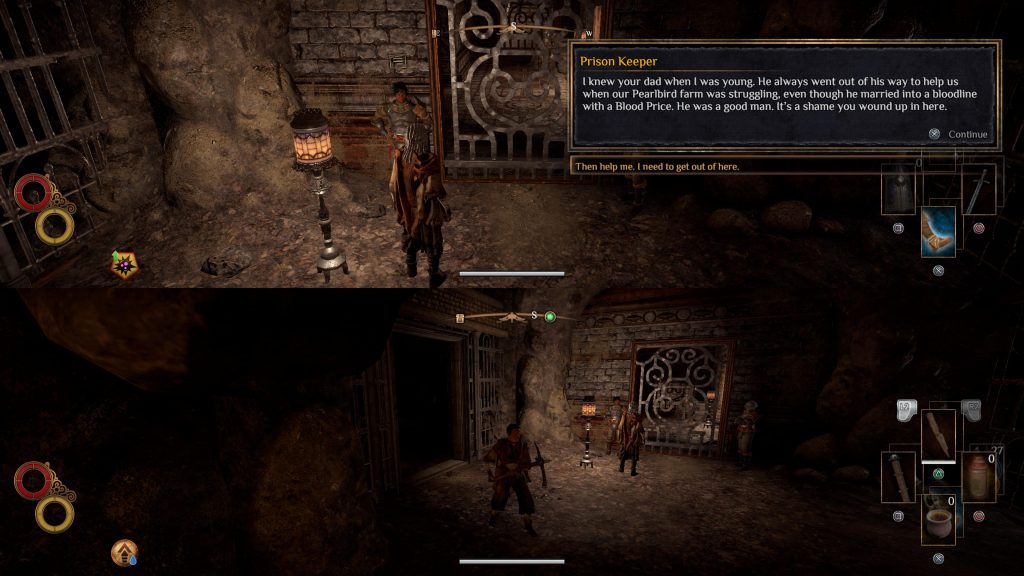 Adventuring in Outward is full of options and curve-balls then, but it’s also a constant exercise in survival, as the outside world is incredibly hostile. Bandits and creatures roam the countryside, fantastical monsters lurk in dungeons, and everyone and everything is out to screw you – even (and especially) the weather, which can go from warm to freezing before you know it. There’s so much you need to account for before planning a big trip that isn’t rocked by disaster, but as you gradually get better gear (there’s loads of it) and learn the systems, every outing gets easier and more rewarding.

I wish the combat was as fun as the meticulous planning and careful trekking, but it lacks the ambition seen in the rest of the game. Striking or shooting enemies with weapons and spells feels floaty and impact-less, movement feels stiff and activating skills in the heat of battle is harder than it should be due to awkward controls and input mapping. Most of my fun was derived from the pre-planning, or baiting enemies while my brother ambushed them from behind, though the genius of our plans and immersion in the moment was often ruined by the stupidity of the AI getting stuck in the terrain. 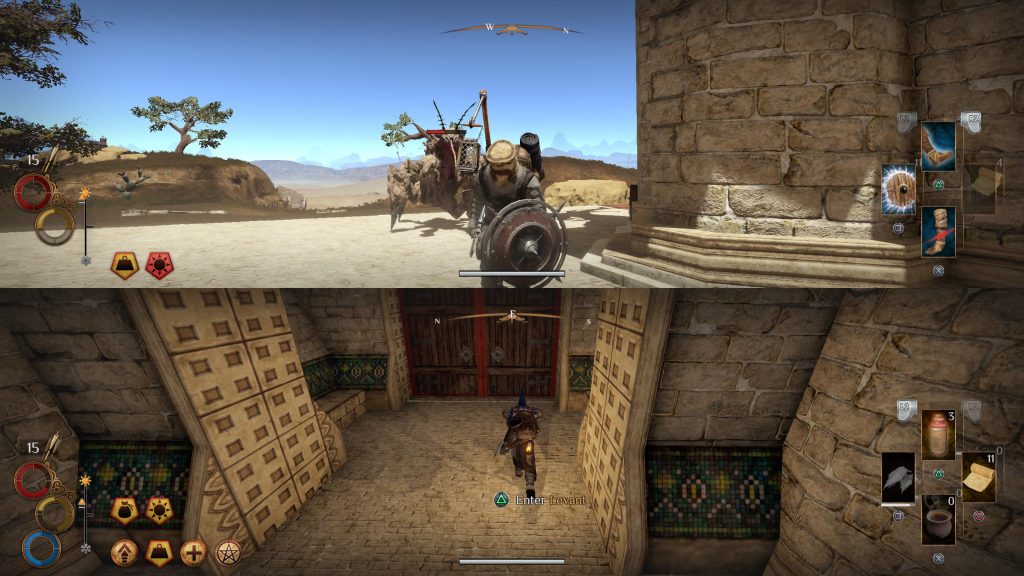 At the very least, you have a lot of options on how to tackle fights. You can throw your backpacks to the ground to help you move faster, though there’s a risk of it being left behind if you die. You can exploit the environment to your advantage and shoot from afar with bows, guns or magic. For me, I enjoyed playing the role of a tank, hiding behind a crude shield to smash foes up-close with a special ability. The variety in equipment and weapons, RPG systems and potential loot somewhat softens the blow of the clunky combat… but none of it can’t hide the ugliness of the character animations.

To be frank, Outward is not a pretty game. The Definitive Edition seemingly did little to change that in a dramatic way beyond a boost in resolution, texture quality and frame-rate, though I unfortunately experienced many performance drops and screen-tearing during my splitscreen co-op playthrough. Several character models and environments also lack detail, though spell effects and the weirder monsters look impressive, as do the various biomes you’ll trek across. On the audio side of things, the background music for each zone is pleasant enough if a little generic, and the acting unfortunately awkward and repeated for how little of the main questlines are voiced. None of it is a deal-breaker, however, so long as your expectations are kept in check that this is a lower budget RPG with a lot of ambition, heart and fun ideas – most of which it manages to execute successfully. 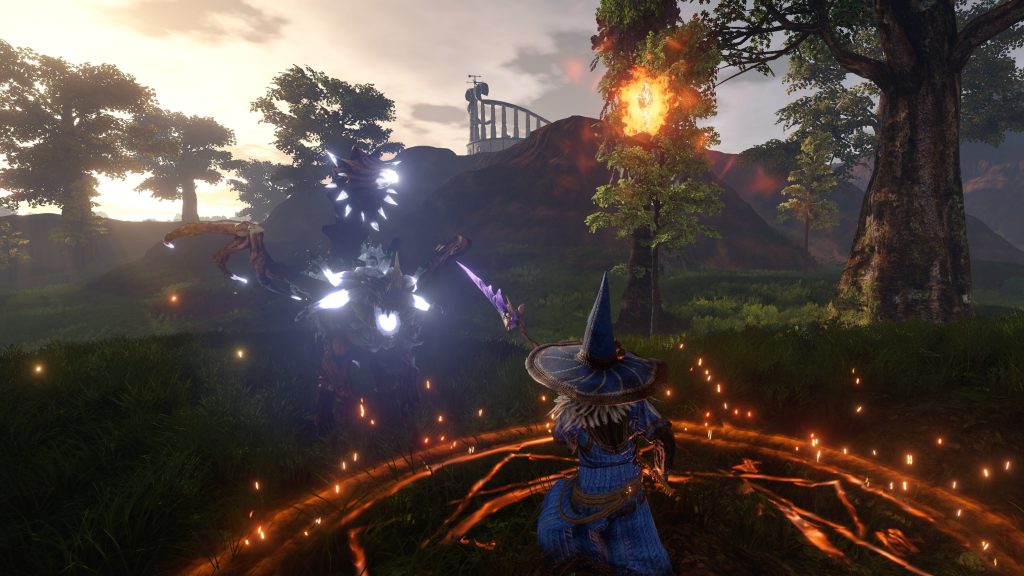 This all leads back to my favourite fact; this is a fully-fledged, 80+ hour RPG with full support for local splitscreen co-op (and online), and it personally made my experience all the more enjoyable. Each player has their own inventory and stash to manage, and can move within the entirety of the current zone to explore, trade items, engage with NPCs and fight enemies, and the UI and menus are tailored for splitscreen play, with only the world map taking up both players’ screens. It’s a shame that only player one’s quest progress is saved, though if you’re like me and aim to finish the game with the same co-op partner, this becomes a non-issue. Considering their smaller budget, Nine Dots did an incredible job to make this a reality, and the Definitive Edition makes this option a little smoother on PS5 and Xbox Series consoles, despite some unfortunate frame-rate drops.

Outward: Definitive Edition is an open-world role-playing game that punches above its weight.

It’s not the best looking (with disappointing performance drops), nor does it carry the most ‘epic’ fantasy story, but its wealth of great ideas, in-depth gameplay systems and inclusion of local split screen and online co-op modes offers a unique experience for RPG fans itching for something more ambitious and weird.

With the previously released The Soroboreans and The Three Brothers DLC expansion built-into this version of the game (complete with two new regions, quests and loot/enemies), there’s a lot of content to dig into and a lot of playtime to be had if you want a meaty, long-term adventure. 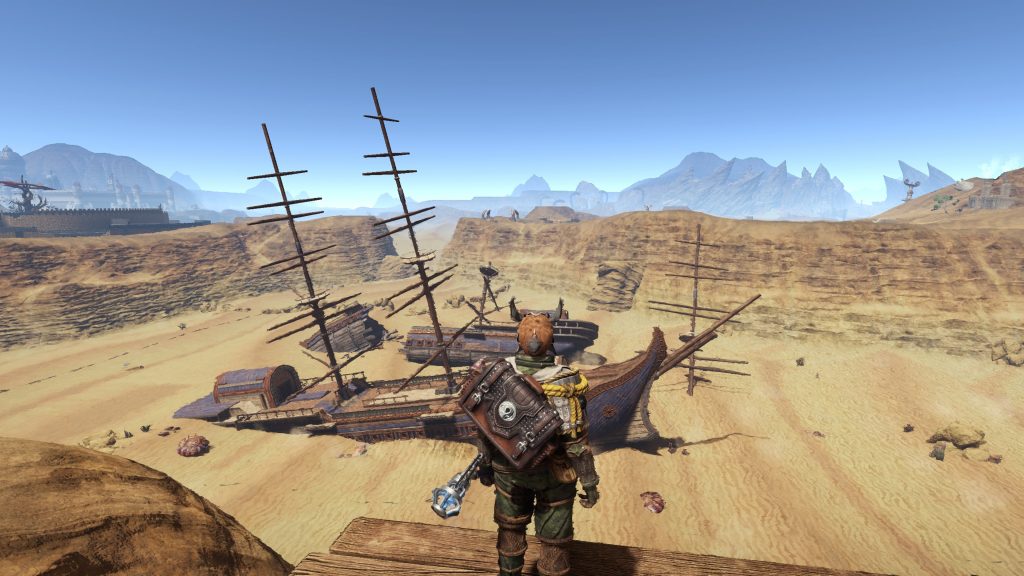