I am a huge horror fan, from Lovecraft to King, I love it. But it’s hard to find good horror in comics because the medium itself leaves too little to the imagination. That being the case 9 out of 10 times a book will have the ability to actually surprise the reader, one of those books is Orison #1.

The story starts out in a remote dig site in the mountains of Nepal. (I said remote right?) Here we have a member of the sites excavation crew, gun in hand running for his life following the massacre of his crew, what happens next is right out of Carpenter, and has just as much exhilaration as anything I’ve seen on screen. When I first cracked open book, I thought ‘Oh man that art isn’t helping my first impression but as I read the story I began to see why it fits , similar to how Sandman’s art fits with its story and that’s because it’s not supposed, being that it’s a horror story.

Golden starts the story off in the middle of everything which is both good and bad in this case. The good part is that we don’t have to go through what will most likely be pages of people digging. The bad is that we don’t get any characterization either, which is also tied into the fact that this comic is terribly short. The brevity of work however does serve the purpose of creating immediacy and making reader want to read the next comic. 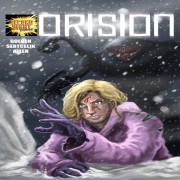