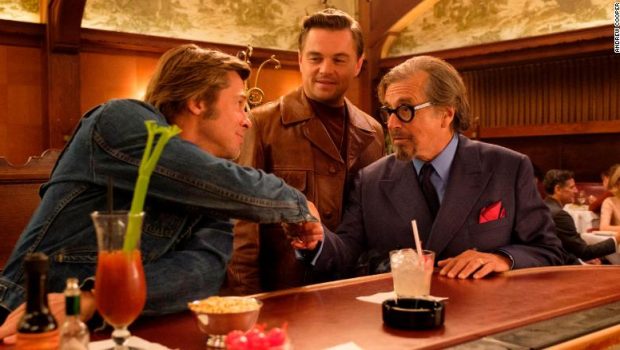 Once Upon a Time…in Hollywood – Film Review

Quentin Tarantino’s inability to separate fiction and reality climaxes in Once Upon a Time…in Hollywood. It marks the director’s first film since his long-time producer Harvey Weinstein was exiled from Hollywood. It is a rare misfire underlining how the once vaunted ‘Tarantino universe’ is no longer a tenuously connected filmography but a mirror of the director’s bleak consciousness.

Just as Tarantino’s war movie Inglourious Basterds (2009) opened with the line ‘once upon a time’, this comedy-drama reimagines modern history as a fairy-tale. However, it is littered with tedium and the ending amplifies the director’s bizarre penchant for sadism. The story’s meta layers imply that brutal action surpasses imitation as though the film justifies Tarantino’s skewed ideas of authenticity.

Hollywood is set in LA in 1969 and follows three parallel storylines that eventually overlap. Rick Dalton (Leonardo DiCaprio) was once the star of the show Bounty Law but his work has dried up. He is currently featuring in another TV Western for an eccentric director. However, he is warned by his manager, Marvin (Al Pacino) that he will become a punching bag for other actors and is encouraged to work with Italian filmmakers instead.

On the set of the show, Rick meets his young and impressive eight-year-old co-star, Trudie (Julia Butters). Meanwhile, Rick’s stuntman, Cliff Booth (Brad Pitt), is his driver and only friend. He too is also looking for work. In flashback, we learn why he was removed from a movie set. Simultaneously, actress Sharon Tate (Margot Robbie) is living with her partner, Roman Polanski, next-door to Rick. Sharon is making her own mark in Hollywood and spends the day watching a movie she made with Dean Martin, The Wrecking Crew.

Tarantino’s filmmaking has been invigorated by borrowing iconography from pop culture and rewriting passages of history. The exercise proved purposeful in Inglourious where Hitler hilariously met his comeuppance and both sides of the Second World War were portrayed as vicious monsters. Additionally, Django Unchained (2012) invented a black hero who openly defied slavery. Unfortunately, Hollywood’s deliberately heavy lean on nostalgia rather than imagination smothers the story.

Sometimes it is quietly humorous and inspired, such as a close-up of a dog food brand called Wolf Tooth, but otherwise lacks restraint. There are shots of Mad Magazine covers, posters, records playing, on-the-nose music references, old movie footage with DiCaprio spliced into scenes, star cameos, and a laughable number of bare feet. While this was a wartime period for America, Tarantino’s nemeses are agents of counterculture looking to disrupt his pop catalogue or geek fantasy. As he was only a child in the late 1960s, his perception pales compared to someone utilising vivid personal details, such as Alfonso Cuarón’s recreation of 1970s Mexico in Roma (2018). 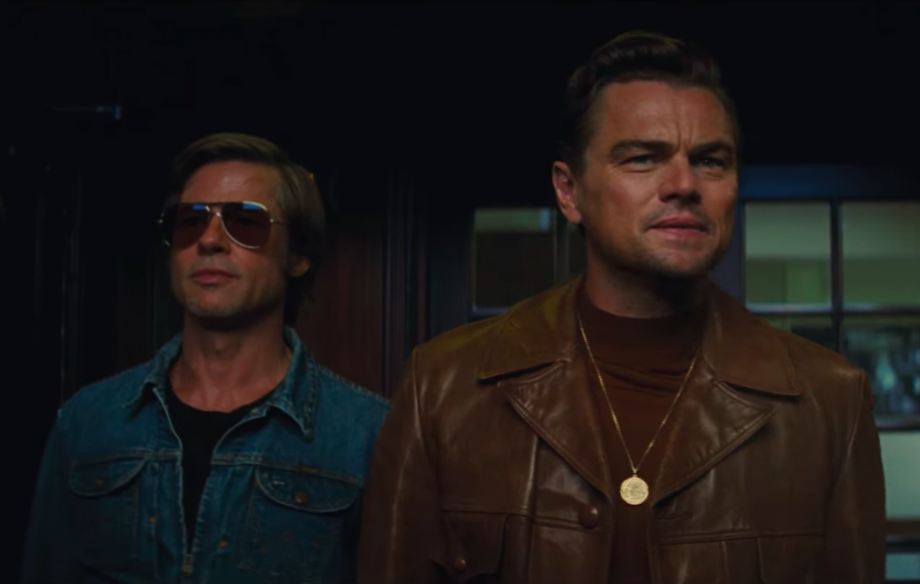 Too much of Hollywood compares to someone straining to recreate their favourite pop culture staples. For example, Cliff’s elongated driving scenes are a tedious imitation of Tarantino’s favourite ‘hang out’ films and needed pruning. Comparatively, the downtime in Pulp Fiction (1994) worked because the banter and hip dialogue enriched the characters. Here too many of the side characters merely sound like their author or vanish entirely. While often prolonged, other episodes could have been expanded. There is a superfluous, expensive-looking party scene that merely exists for exposition where Steve McQueen (Billion’s Damian Lewis) explains Sharon Tate’s relationship history.

Despite the period details, Tarantino’s filmmaking is at times surprisingly lazy. When the story forwards six months and shows Rick returning from Italy, a voice over lumps the characters’ feelings over scenes without dramatising them. It dully says, ‘Rick was really not sure what lay ahead for him’ and ‘Cliff doesn’t have a clue what he’s going to do’. The moment highlights the overemphasis on pop trimmings instead of character and story. One of Hollywood’s minor actors conceded that material was cut from the film, which accounts for the poor cut.

Hollywood is more interesting as a pattern of personal validity. This examination is best realised in fragmented episodes involving Rick’s time on television where he is cast as the show’s villain. An interesting moment in this sequence is when he is reading his book and talks to his pint-sized co-star, Trudie. She is so reassured that it makes him cry and feel vulnerable. The use of the Western is not incidental either. The genre’s depreciating popularity mirrors Rick’s sense of irrelevancy. 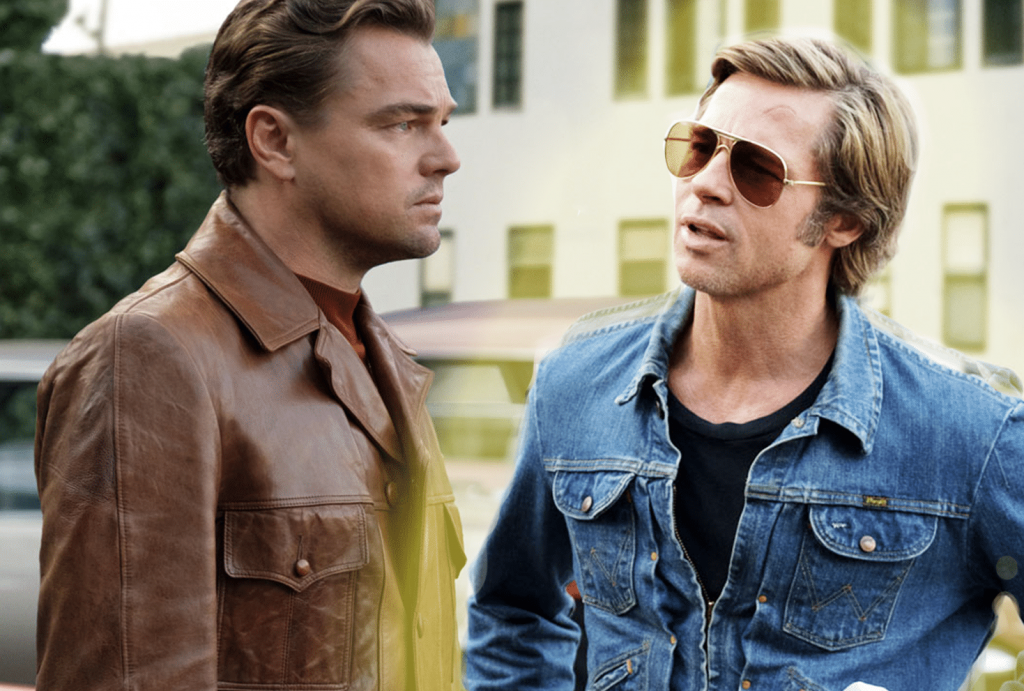 There is another a strong scene where Rick thrashes around in his trailer because he has embarrassed himself. In this moment, DiCaprio brings a light comic touch of self-pity and vulnerability to his part. Rick is a whining, self-absorbed fellow who lives in a mansion and complains about potentially making Italian films. A top-down high angle shot shows him alone in his pool, which illustrates his loneliness.

The story offers a generic question about male friendship, such as whether Rick will value Cliff’s loyalty. Tarantino finds a simple but efficient binary to show their dislocation. Cliff lives alone in a rundown trailer with his dog, which is a stark contrast to Rick’s mansion. Strangely, more time is given to Cliff’s history rather than progressing his story.

An incredibly long flashback reveals why Cliff was fired for an incident involving Bruce Lee. It provides some backstory but merely affirms that Cliff is a strong fighter. Some of Lee’s family have slammed the icon’s portrayal but apparently in the Tarantino universe even real people can be rewritten and reprogrammed. Throughout this thread, Pitt’s performance as Cliff is a chilled, minimalist take that refrains from dramatic challenges.

Despite having few lines, Margot Robbie’s enthusiasm and positive energy as Sharon Tate radiates. The sight of seeing her watch the real Tate in The Wrecking Crew is a cute meta gag that reflects her search for validation, but the stakes are too low. Her relationships are disinteresting as Polanski does not register as a character and Emilie Hirsch as her hair stylist and ex, Jay Sebring, is wasted. Instead of focusing on the elongated cinema trip alone, Tate’s relationships with these men could have enriched her scenes.

Arguably, Tarantino waited too long for Hollywood to manifest given its resemblance to other films about show business. Clouds of Sils Maria (2014), a superior film, starred Juliette Binoche as an ageing actress. Her future appears bleak until bonding with her younger assistant. The way they rehearse lines together sees fiction and reality overlapped in an even more compelling way than Rick humorously straining to remember his lines.

Clouds is also more thoughtful than Hollywood regarding gender imbalance. It is odd casting DiCaprio as an actor on the fringes when he is only forty-four. In the real world, men have infinitely longer Hollywood careers than women. It is more a reflection of casual sexism rather than talent. Consider Liam Neeson’s belated foray into action movies. As a ‘hang out’ movie Clouds is funnier too, particularly the hilarious scenes of Binoche and Kristen Stewart debating the relevancy of superhero movies.

Aside from Robbie’s Tate, it is curious how women are feared throughout Hollywood. There is a brief flashback about Cliff and his wife that apparently alludes to Natalie Wood’s disappearance. Cliff is warned by a colleague that his wife dislikes him because she believes this rumour. Similarly, dread is imposed throughout the film by the presence of the Manson family.

Most damning though is that Charles Manson (Damon Herriman) is barely sighted. What caused Tarantino, the man who killed Hitler, to pull his punches? Instead, the Manson hippy women take precedence. There is a painfully long sequence where a young woman nicknamed ‘Pussycat’ (The Nice Guy’s Margaret Qualley) hitches a ride with Cliff. It is Tarantino’s tribute to American Graffiti (1973) where a college student picked up a young girl in his car.

Cliff asks Pussycat her age after she propositions him, which suggests he is more cautious than expected. A strange scene then follows where Cliff meets director George Spahn (Bruce Dern) on a ranch inhabited by the Manson family. Minus Cliff, this happened in real life with the director, but the scene’s intentions are unclear.

The moment is less tense than the best parts of Inglourious and Django but appropriately creepy and unnerving. Though a wordless cameo by Lena Dunham is a bizarre addition. Is Tarantino reshaping the Manson history or secretly colliding with the #MeToo movement? It is one interpretation considering the images of an aging director being over-powered by young hippy women and Cliff feeling he must justify his masculinity.

While unexpected, Hollywood’s climax is distasteful even by Tarantino’s gruesome standards. It will not be spoiled here, but at the critic’s screening some laughed at the over-the-top violence while one person appeared to leave the film early.

It is pitched as a defining moment of loyalty for its male characters and intends to resolve the film’s gender problem. Yet it is too violent and offensive to resonate. The brilliant home invasion scene from Jordan Peele’s horror-comedy Us (2019) was bloodless and more suspenseful. 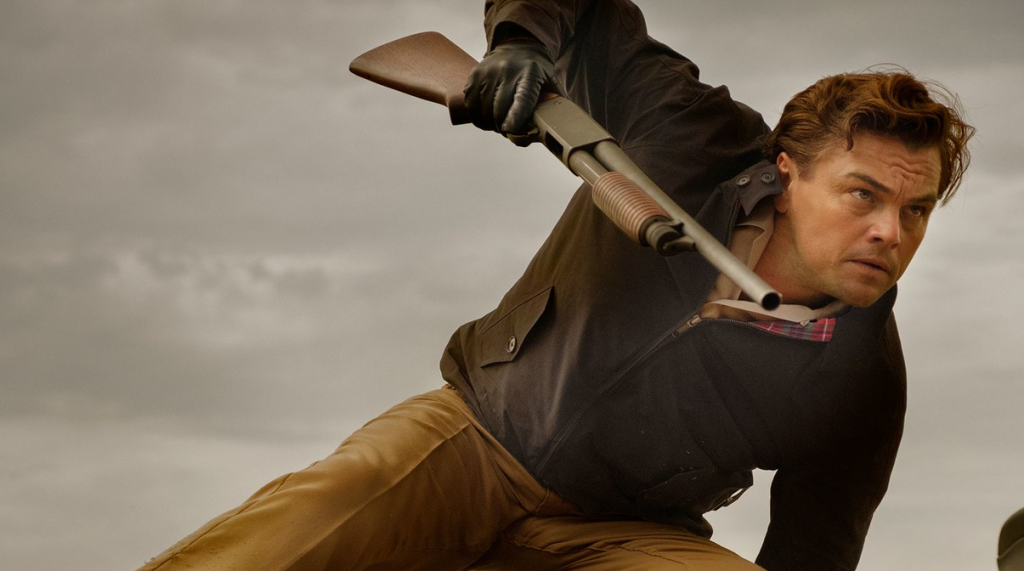 It is questionable whether Tarantino’s alternate history is imperative to his films or shows an inability to excuse himself from his own cinematic universe. When Cliff lights an LSD-tipped cigarette it recalls sci-fi author Philip K. Dick’s descriptions of psychedelic drugs, which resulted in collisions between the real and imagined.

Equally, the way Rick and Cliff transcend comic movie violence with ‘real’ heroic action is an uncomfortable mirror of Tarantino’s demands for authenticity. His desperation to conceal the man behind the curtain without accountability has resulted in on-set incidents that have melded fiction and reality in disturbing ways.

While filming the Kill Bill movies, he caused a car accident that left actress Uma Thurman with a serious knee injury. He also spat in her face and choked her supposedly all in the name of  authenticity. His hands were used in Inglourious Basterds to strangle actress Diane Kruger to make the moment more real, and while filming The Hateful Eight (2015) an antique guitar was smashed to pieces but Tarantino was more satisfied with Jennifer Jason Leigh’s natural reaction. The pattern of behaviour is compounded by Tarantino’s most famous quote where he once said, ‘violence is one of the most fun things to watch’. It is a lot more fun when no one is actually being hurt. 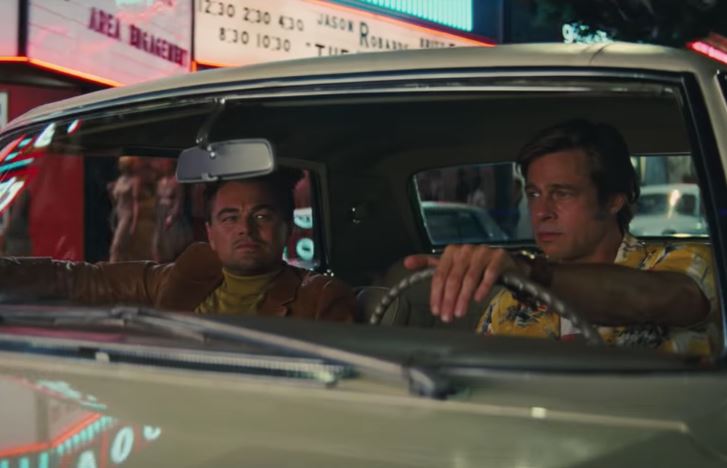 Nonetheless, some have praised Hollywood as a powerful visual essay of the period. Yet the heavy pop trimmings overwhelm a potentially compelling narrative. Until the end, the story is overly fragmented. It leaves DiCaprio’s otherwise solid, self‑deprecating portrayal stranded within an uneven project, and the ending is too grotesque to justify its rather useless ‘what if?’ question.

Tarantino has concealed himself with an apolitical cinematic universe where he believes he is preserving classic Hollywood by rewriting history and pop culture for himself. Real life consequences prove inconvenient for someone who believes their pop fantasies are being altered by the changing political climate. Genuinely great filmmakers are rare because they adapt to changes around them. If Tarantino’s tenth film is his last, he still has an opportunity to redefine his otherwise troubled legacy.

Once Upon a Time…in Hollywood – Film Review Damien Straker
Score

Summary: Quentin Tarantino’s inability to separate fiction and reality climaxes in Once Upon a Time…in Hollywood.