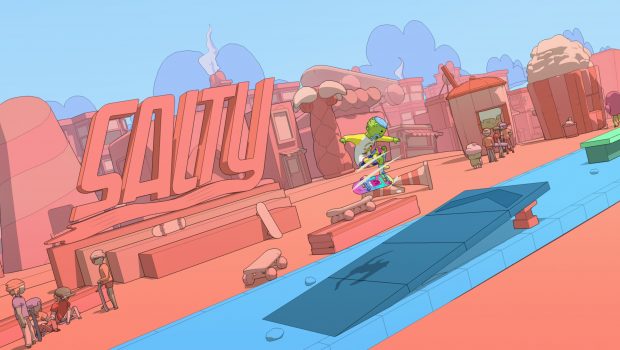 Summary: A masterclass in design, style, and connection, OlliOlli World perfects the formula and delivers a heartfelt world at the same time.

When OlliOlli arrived on the PS Vita back in 2014 it had the advantage of being the outlier. Tony Hawk’s Pro Skater was well and truly retired at that point, and EA was happy to continue ignoring the rabid fanbase seeking Skate 4. Roll7, a tiny team from the UK managed to release a 2D side scrolling skate game with an absolutely banging soundtrack that started a revolution. It’s hard to understate just how ahead of it’s time OlliOlli was. It’s fluid 2D motion and precision was years ahead of twitch-based Roguelikes, and it brought “24/7 lofi hip hop beats to relax/grind to” into the mainstream long before the meme existed. They quickly followed up the winning formula with OlliOlli 2: Welcome to Olliwood a year later, and then moved on to bigger and different things.

In many ways, it’s hard to deny that OlliOlli World is also years ahead of the curve. A jubilant psychedelic world filled with nothing but good vibes, griptape, and honest empathy. In a time where mainstream games are focused on length, challenge, dark stories, and whitewashing the colonialization of far away lands with pocket monsters, OlliOlli World delivers a skate-topia that is an absolute delight to play, no matter who you are. 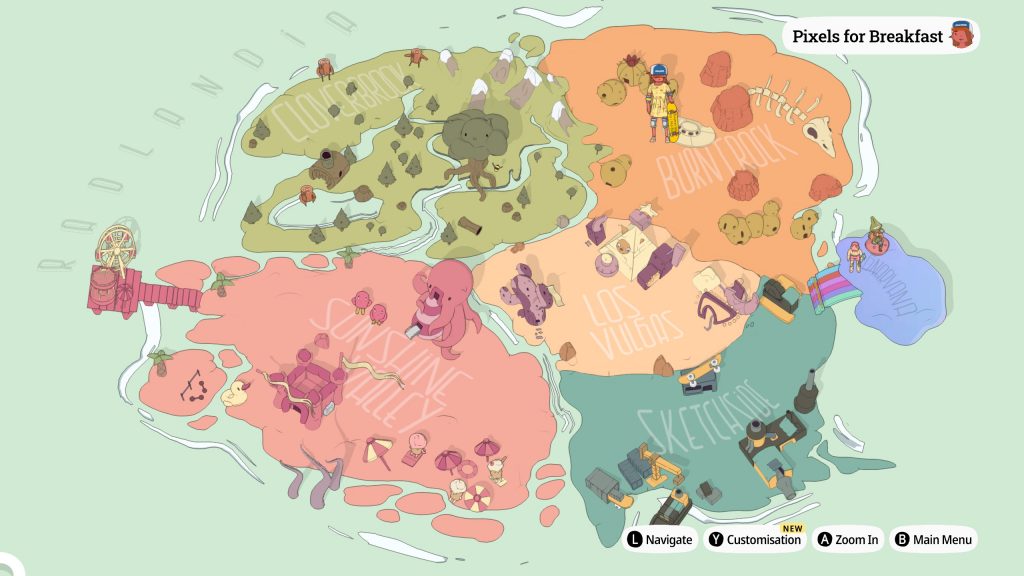 Welcome to Radlandia, a collection of six wild and varied locations, each with a myriad of challenges and stories to unlock. “Stories? But I’m here to grind!” you say? I thought so too friend, but the more time I spent in the Pendleton Ward fever dream that is OlliOlli World, the more that I stopped caring about the skating, and instead I cared about my new family. Framed as a road tour with a group of misfits, you skate around to appease the five skate gods of Radlandia to unlock passage to Gnarvarna, the GNARLIEST SKATE ZONE this side of the known universe. You are believed to be a prodigy Skate Wizard, and along the way you learn more about your ragtag friends and the quirky folks that fill this delightful world. Seriously, this is some of the most heartwarming, feel good moments you’re going to see in any video game. I loved getting to know Mike who loves to smash things, and Suze who is always there to document my sickest moves. Each and every character is memorable, delightful, and more importantly, they don’t get in the way of the skating. 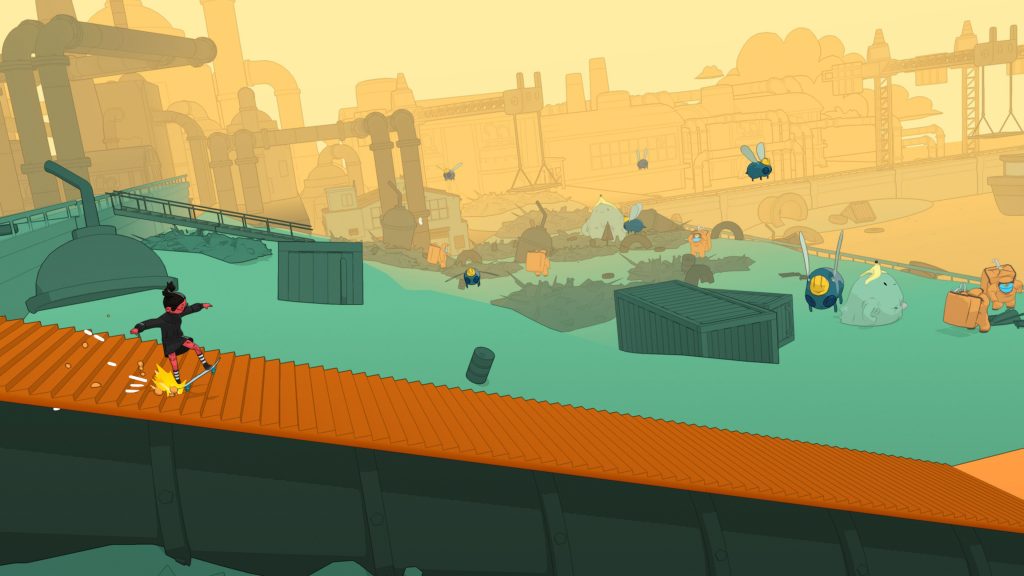 Because the skating is seriously just so good. Don’t let the pastel color pallete, or people in inflatable banana costumes fool you. OlliOlli World may have accessibility at the forefront, but they have not forgotten the fans who made the franchise such a wild success in the first place. Each and every course is an intricate and frantic grinding paradise, as you string together impossible combos using a combination of flips, grabs, manuals, and grinds. The level design is beyond ridiculous, in the best way possible. While the original OlliOlli games were grounded in at least a little reality as you explored the streets of cities, World has you grinding billboards carried by kawaii buzzing bees in a forest. They have you attending a music festival in the middle of a desert. They even have you skating through haunted graveyards. The amount of creativity on the environments and level design caused me to bail more than a few times, as I wanted to soak in every single pixel that was hitting the screen.

And while these levels are certainly challenging, I really admire that Roll7 has made the game as accessible as possible. Players with a modest amount of practice will be able to complete the bare minimum of making it to the end of the stage to move on. But each level has a series of challenges and branching paths for those who want to test their skills, and by the time you are half-way through the first area, you’ll be bailing hardcore as you stretch to hit your goals, and place on the leaderboards. OlliOlli World also features a neat asynchronous multiplayer mode that players battling out for superiority with their friends, and complete strangers. Gnarvarna League will put your skills on display against the world, with thousands of multiplayer only stages to compete on. So there’s plenty of opportunities for you to really test your limits and improve.

But it’s not just the level design that makes OlliOlli World accessible, nor it’s soft and welcoming art style. It’s really worth pointing out that World creates a really safe space for creativity and expression from the get go. The character designer has no limitations, and without expressly saying it, it’s pretty clear that Roll7 is creating a non-gendered space that can represent ANYONE’S desires, and personally I’m all for that. They don’t make a point of it, it’s just how it is. But I want to make a point of it, because that’s not how most video games are done, and perhaps more should take a leaf out of Roll7’s design book. 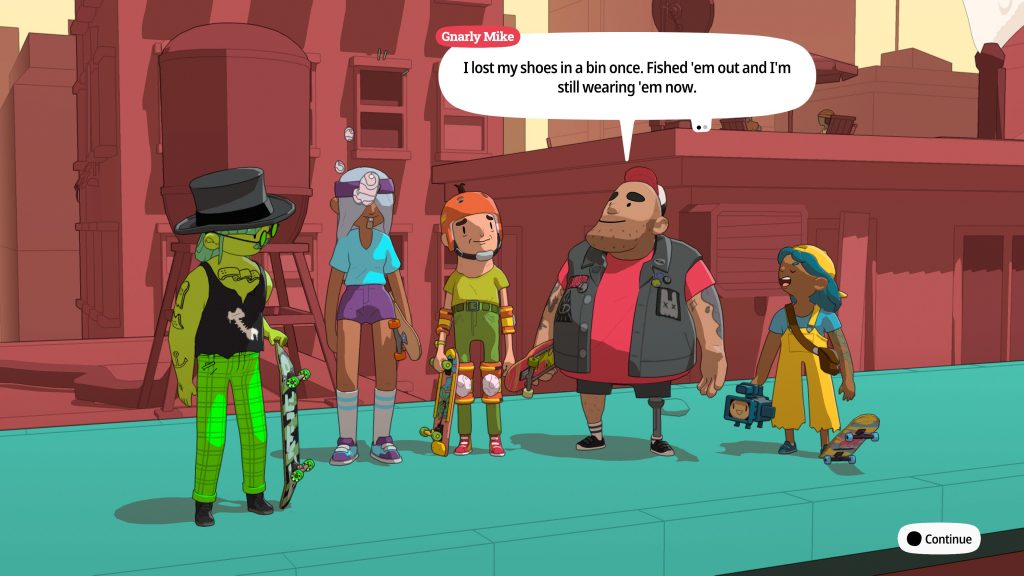 How are we nearly 800 words into this review, and I haven’t mentioned the soundtrack at all? I expected OlliOlli World to stay true to its heritage, delivering a hypnotic driving beat that allowed me to get into my zen state and just shred, but I was not prepared for what was waiting for me. Every single song on this soundtrack is really amazing, getting their hooks deep in your brain long after you log off from your session bringing their calming zen-like qualities to those quiet moments in their day.

Have you caught on yet? OlliOlli World isn’t just a sequel. It’s a complete masterclass from a developer who truly understands the healing power of skating and skate culture. Each and every stroke of art, each and every beat of the soundtrack, each and every line of dialogue. OlliOlli World might be billed as a sidescrolling arcade skate game, but that would be grossly underselling the achievement that this game is. OlliOlli World is perfection on four wheels realized, brought to life by a team of creatives minds who want to capture the essence and joy of the grind.