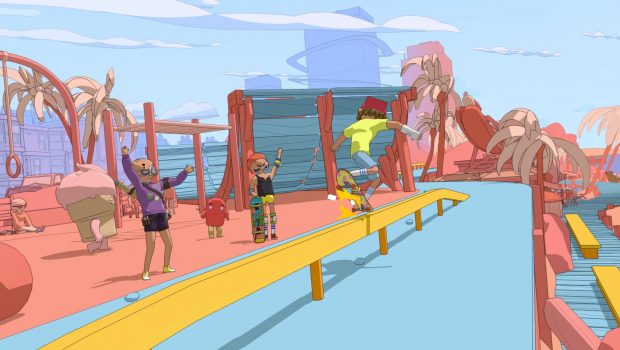 If you take the resurgence of Tony Hawk Pro Skater and jam it into a blender with a sprinkling of Adult Swim, and all the good parts of Rick and Morty, you get OlliOlli World, the surprisingly ambitious sequel to Roll7’s flow-state arcade skate series that is more about capturing the true spirit of skate culture, rather than the Jackass culture that followed.

OlliOlli World is a complete re-work of the award-winning formula, transforming the flat locations from the first two games into a 2.53D wonderworld that is filled with character, not to mention wild animals and banana people? Immediately you are introduced to a Skate team headed up by Dad, as they suss out your skills on the grip tape and induct you into the family. These characters are fun, witty, and provide something that the skate games have never dared to before – a heart. I care about these people, instantly. I want to know more about Suze, the skate prodigy since age 5 who films all of your best runs. I want to know how Gnarly Mike earned his reputation as Gnarly because he seems absolutely delightful. I also really want to know how far B.B Hopper the slippery toad who is obviously trying to take advantage of my natural talent is willing to go in order to earn some scratch. The story doesn’t detract from the skating, but this is a wonderful place to be, and I can’t wait to learn more about them as we go on a road trip across the skaterverse.

Just like its predecessors, OlliOlli World is all about flow. Kick to go fast, flick to do tricks, and make it to the end. It’s as accessible as you can get with a skate game, which also makes it one of the best. It seems to punish you less for those awkwardly timed landings than the first two games, and if you just want to see what OlliOlli World has to offer, you are given the tools to navigate it competently in the first ten minutes.

But if you want those good scores, and you want to complete those challenges, you’re gonna have to bring your A-game.

I’m talking ollies and nollies, boardslides and benny-hanas, wall-rides and manuals, switch stance and crossovers. OlliOllie World may appear to be less punishing at first for veterans, but there’s still that incredible amount of depth in the combos here to keep you perfecting your technique.

The big change here is that OllieOllie World often has branching “tracks” where you will switch across to explore a different side of the course. In this demo, they showcase how certain challenges will be only available on certain routes, for example, these cat balloons that I needed to pop were only on the lower route. But they also have some interesting side-quest content, where you will come across a character to chat to as you skate along the new path, and they will meet you in another location to deliver some unique challenges. I hope there’s a lot more of this in the full game, because this plays into the whole caring about the beautiful world thing, and I want to see more of that.

And just like the first two games, the vibe of OlliOlli world is so on point that I can’t help but convince myself that “hey, maybe you could learn to skateboard at 34”. The flow working in concert with the phenomenal soundtrack, and this weird mishmash of fantasy meets amusement park cornucopia of skateable locations just feels so damn good to play. There’s a reason why I went out and bought a PS Vita when OlliOllie was released, only to immediately sell it when it was ported to other platforms – the developers know how to make a great feeling skate game. It’s very clear that they are passionate about what it feels like to skate, and I get the feeling with OlliOlli World, that they want to share that with everyone, not just fans of Tony Hawk.

Because OlliOlli World just feels more inclusive. Its soft pastel colors and magical environments make it feel more like an adventure, rather than a real-world city. These are characters I want to sit down and have a cup of tea with, and hear their life stories, rather than shotgunning six beers in the car-park of some crappy convenience store before going to a hardcore show of some band I don’t really like that much, but I need my friends to think I’m cool and like the same things as they do.

OlliOlli World doesn’t build on the formula of its predecessors. It takes it, breaks it, and reshapes it into the skating game we never knew we wanted. It nails its aesthetic and tone, and I can’t wait to get my hands on the full version when it releases later this year.