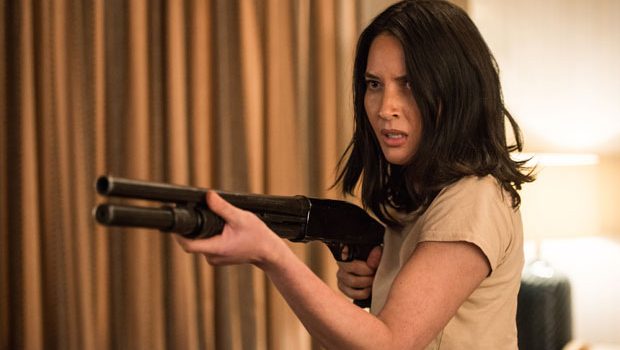 The Arnold Schwarzenegger classic Predator is high on action, frights and classic one-liners but low on compelling female characters. Updating the franchise for modern audiences, Shane Black’s The Predator puts evolutionary biology professor Casey Bracket, played by Olivia Munn, into the heart of the action as two Predators battle for supremacy in suburban America.  As well as two alien assassins — including an all new Super Predator — Brackett is also dealing with a band of PTSD suffering ex-soldiers dubbed The Looneys (Boyd Holbrook, Trevante Rhodes, Keegan-Michael Key, Thomas Jane, Alfie Allen, Augusto Aguilera, and Sterling K.  Brown) who might just save the day in an adventure that’s as fast and funny as it is scary and thrilling.

As the film bows on Blu-ray, DVD and digital download, Munn, best known to genre fans as Psylocke in X-Men Apocalypse, reveals her joy in action sequences, why she never went to her trailer on set and the reason she nearly turned down the role.

Is it true you had concerns joining the cast as a ‘love interest’?

It is true I said no to the role at first because I made the assumption that these types of roles were just going to be the love interest. Now, that’s okay but it’s just not what I wanted to play as an actor. They asked me to take a meeting with Shane and I expressed that pretty bluntly to him. He said this is not that. He said the female lead is a scientist and very much part of this fight. These guys battling the Predator with brute and guns and need you just as much as you need them. You bring the science part to it. I was like. “Okay!” 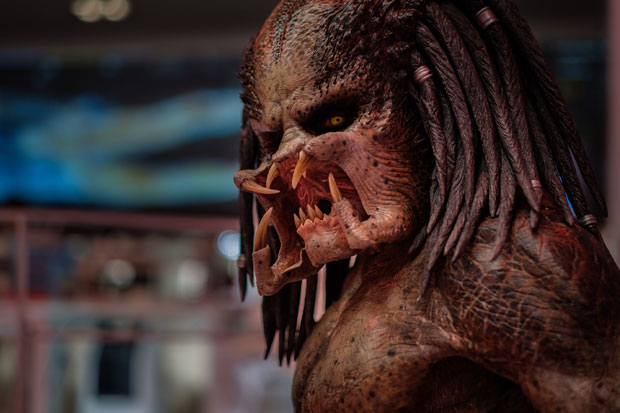 Why was it important to you that Casey knows how to fire a gun already?

A lot of times in films you see a guy who may be a banker or accountant and nobody asks twice why he knows how to use a gun, nobody tries to explain to him. He just does it. But when you see a woman in a movie, she knows how to use a gun because she is a soldier or a policewoman. And if she isn’t one of those things, someone has to explain it to her or she feels uncomfortable, screams and drops it. I said, ‘Why can’t we just make the same assumption we’ve made about men for years and years.’ Once I gave my piece, Shane said. “I hundred per cent agree.” And then we went on.

A Touch Of Black traces Shane Black’s history with the franchise. What was it like working with Shane?

I love Kiss Kiss Bang Bang. It’s one of my favourite movies. It was so comedic, had so much violence and was so fast paced, so shocking at times. We hadn’t really seen that dynamic. In some way. The Predator feels like Kiss Kiss, Bang Bang meets Alien. I loved his vision to bring the Predator into a suburban jungle and to upgrade and hybridize him. So that was a really great thing to be able to work with him and see his vision.

The featurette ‘Predator Evolution’ takes an in-depth look at the Predator creatures. How would you describe the all new Super Predator?

He is upgraded. He is bigger, better, stronger. Our Earth weapons aren’t going to really do it. We have to evolve and understand who are opponent is in real time and we don’t have a lot of time to do that. It’s really interesting as actors to see the restraints we are under. He is not just a mindless animal. He is extremely smart. In fact, (laughs) how do we all not die at the end of this movie? 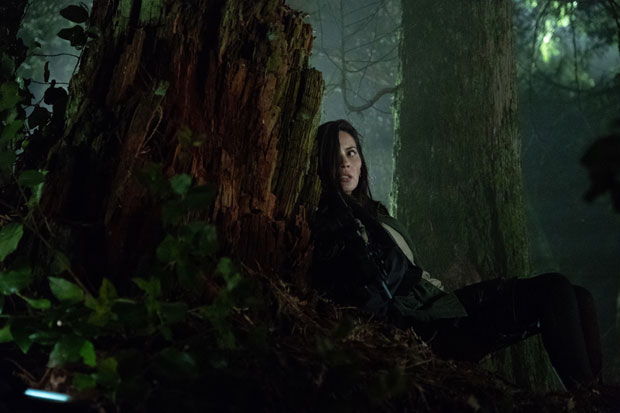 You also get scenes with Predator dogs? 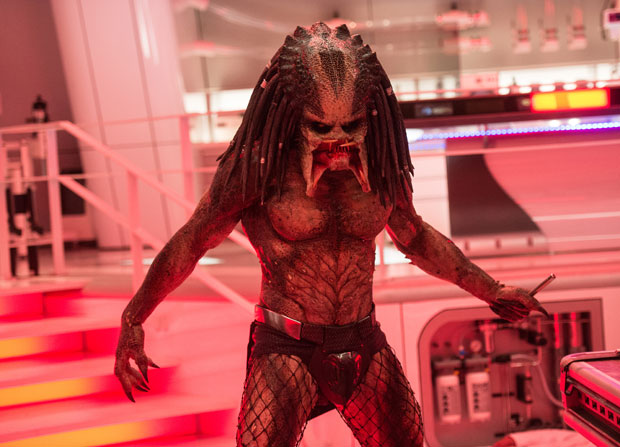 Predator Catch-Up mashes classic moments across the franchise. Do you need to have seen all the Predator movies to enjoy this one?

In other Predator sequels, you would have to know what happened before. This one is really great as it really stands alone. You understand you are in a world where the Predator has existed — some people know, some people don’t — so the audience understands we are not sequeling it from anywhere else. It’s almost like you’ve picked up in a different time, a different place, a different part of the world: okay what happens when the Predator is here. This time we are grounding it into reality. It’s been in jungles or far away. Now it’s in a suburban jungle. We have to deal with an upgraded Predator in our own backyards. You have to realise how intense and crazy and scary it is when you have children on the street. 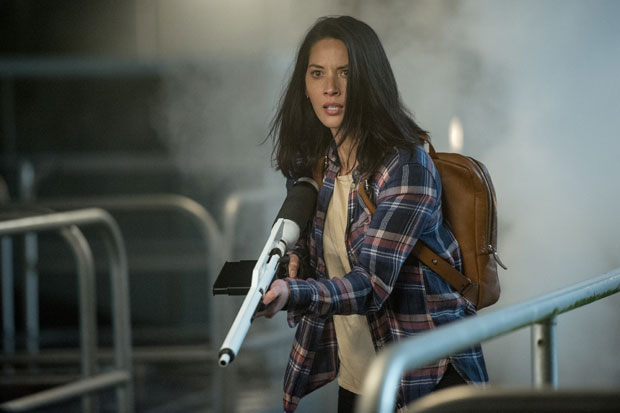 Did you enjoy the action elements?

I love action scenes. I have a black belt in Taekwondo and have done it since I was five years old. It’s part of my DNA, it’s in my blood. There’d be times when I’d get to set and they’d say, “We are going to have you on this moving trolley and you’re going at high speed and can you just jump on top of that bus and then hang off the side?” I was like, “Yeah, okay!” I didn’t think twice about doing it because I love doing it so much.

What are the fans going to love about the movie when they watch it at home?

When the fans are getting to watch it again at home, I think they are going to appreciate all the small comedic moments, things you may miss when you are watching it in the theater for the first time. There are some original Predator Easter eggs that we drop in. 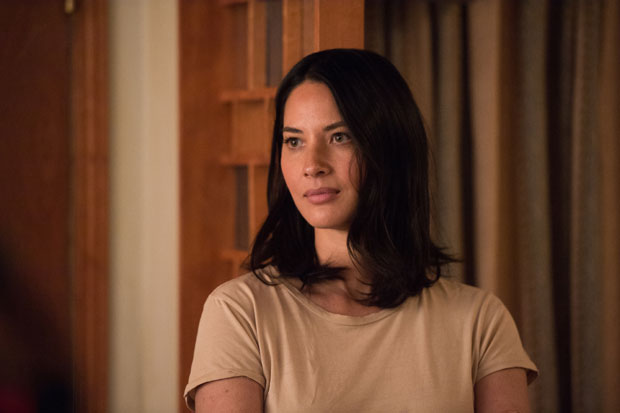 What are your favourite Easter eggs?

When my character goes to the lab for the first time and sees this antique alien weaponry, they are call backs to the original. Also it was important to see the heat vision from the point of view of the alien. It was really cool because all the actors loved that we could ground this movie and make it feel real but also we were excited to put in Easter eggs for the original fans.

What were your favourite behind the scenes moments?

As a group we would all hang out together. Lot of times with actors, we work on our scenes and we are so exhausted we go back to our trailers. On this one, we had a cast tent we called Shangri-La and we would all hang out. We all had this great ability to be in these really intense situations and then in between takes be able to talk about philosophy or Carl Jung or Keegan Michael Key would bring up YouTube videos. He would have every YouTube video chronicled in his head. He came up with some of the funniest one-liners. It kind of felt like doing a semester abroad. I think everybody had a different experience than we normally have on a movie set.

The Predator is now available on Blu-ray, DVD and 4K Ultra HD 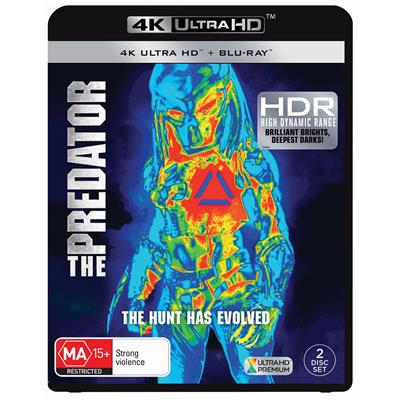