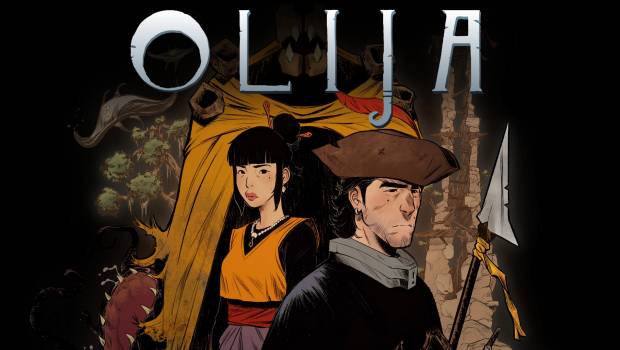 Olija is a master of unease

Summary: Olija is a surprising gem that never delivers a moody atmosphere that can't be beat.

When Olija came across my desk, I thought I knew what I was getting myself into. It’s trailer showcased what on the surface seemed to be fairly standard 2D platforming with some slick combat, and some fairly muted pixel art. I wasn’t excited for Olija. It looked like a thousand other games that I’ve seen on Steam over the past ten years. Then I played the entire game in a single sitting. I could not put it down. Like seriously. I could not stop playing this thing.

Olija is a captivating Metroidvania that takes heavy inspiration from Flashback and Another World, throws in some Lucasarts adventure cutscenes, and delivers a heavy dose of dread. I actually think that’s why I couldn’t stop playing, Olija wormed itself into my brain and I simply had to see it through until the very end, which was thankfully a tight seven hours.

It tells the story of Faraday, a noble captain who is thrown overboard and left for dead while sailing through the tumultuous seas of Terraphage. His ship gone and his crew missing, Faraday is saved by a lone ferryman who takes him back to Oaktide, an island of broken men washed up and hopeless. Like everything in Olija there is a sense of unease about this place, why was everyone here so destitute? Do we all share the same fate?

Determined to not die on the rock known as Oaktide, Faraday sets sail with the ferryman to the various surrounding islands, quickly discovering that a horrible evil has taken root. Before long he manages to discover a mythical harpoon that grants him evil slaying powers, and from there he sets out across the seas to defeat the baddies, and find his missing crew.

As you run through these islands, Olija is content to serve up a healthy dose of intrigue at every turn. Each island is telling a story, whether that be the complete lack of people present, or perhaps the piles of human remains that are stacking up everywhere. What’s the deal with the shadow keys? What does this mysterious door do? Olija never expressly tells you what is going on, and I really liked that. I felt like I was in some kind of David Lynch pixel art dreamscape, and looking back at my notes I even wondered if I was dead at some point?

But trying to work out exactly what Faraday was facing was half of my enjoyment with Olija. It’s interesting mashup of Asian influences with a touch of European fare creates this really interesting vibe, one that feels both grounded, and other worldly. That may have something to do with the Lovecraftian vibes that the enemies tend to throw out at times, but it’s also just an odd setting.

I really do just want to take a moment to speak to Olija’s atmosphere, because despite being such a classic rendition of pixel art, Olija brings a mood that some AAA games fail to reach. You rarely feel comfortable playing Olija. There’s no soundtrack to bring you to a sense of rhythm, instead the levels are filled with the sounds of the sea, or wind, and nothingness. If there’s a musical flourish, either something REAL good, or perhaps something REAL bad just happened. There’s no certainty, just the unknown, and that starts to really creep up on you. 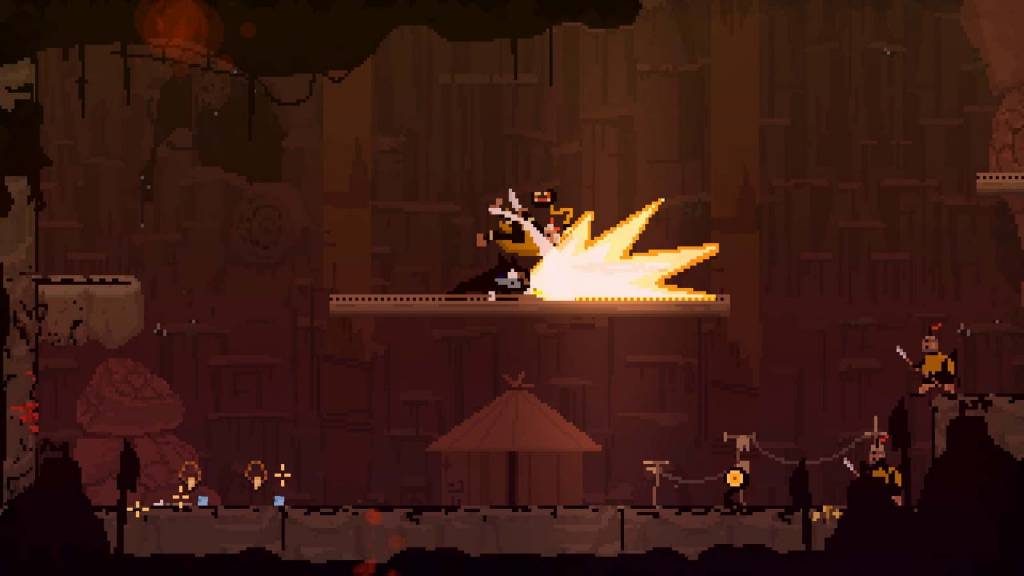 A few hours into the game, that’s when my favorite moments started to happen. You rescue this lady and then her royal guard come swanning in and whisk her away, and I was all like “oi, where are you taking her”. Then you find out that the lady was in fact Olija, who is obviously a noble of some kind, and throughout your adventure Farady and Olija will cross paths and share some very special moments. It was innocent, and fun, and it gave me hope because the rest of what the game was throwing at me was filled with such darkness and despair. It stands out, and I really appreciated where they take that thread.

Do you know what else I appreciated? THE HAAAT SYSSSTEMMMM.

One of the first people you rescue on your escapades happens to be a master milliner who, and I quote “CAN CRAFT POWERFUL HATS FOR POWERFUL ADVENTURES“. You can have these hats crafted using resources that you discover while on your adventures, and the net you nice little buffs or combat options that just add a small layer or depth. My most used hat was the Crocodile hat, which has a vampiric trait to get some health back, of the Feather Hat that launches damage-dealing quills at the end of a combo. None of these hats are massive game changes, but rather nice flourishes to the combat.

Speaking of the combat, it’s a pretty simple system that some people will find rather slow when compared to modern Metroidvanias. Olija has a heavy animation system like Flashback and Another World, which slows the combat and movement down, but makes it feel super weighty and impactful. Faraday has a few tidy combos up his sleeves, and when you throw in the Harpoon that will allow him to attack-dash his way through some beasties, you have something that feels satisfying, but isn’t insanely hard to memorize either. For me that was the perfect balance, because I was invested in the story, but if you’re wanting something that packs the punch of Dead Cells, you should look elsewhere.

The same goes for those seeking a Metroidvania that will soak up a good chunk of time with terrific quests and reasons to backtrack. Olija is a simple game, that has a much smaller but more refined scope. It says everything it needs to say across its six to eight hours, and by the time I made it to the end, I was deeply satisfied.

Subverting my expectations, Olija has earned its place as one of the most haunting, and surprising games I’ve played in quite some time. I cannot recommend this game enough.

Rainbow Billy: The Curse of the Leviathan Review →