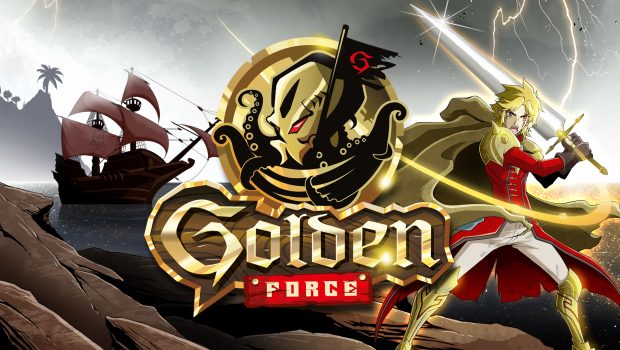 Put on your armor, sharpen your sword, and dust off your controller! 22 stages of hacking, slashing, and platforming fun are waiting for you to master them, and to score the best time possible! This retro-style run n’ chop platformer full of combos, monsters, and kittens is now available on Steam!

Control one of the 4 members of GOLDEN FORCE and help them defeat the army of monsters lead by Demon King and his 5 generals in 22 vibrant stages featuring retro-style pixel-art graphics. As a money-and-glory-hungry mercenary, you’ll have to face various challenges, including but not limited to fighting various enemies and bosses, collecting a cornucopia of different items, keeping your balance while traversing the islands of the Muscle Archipelago (watch out for the spikes), and holding your breath while exploring the deeps waters surrounding it (watch out for the fish). Remember that Demon King is not a wuss so it’s a good idea to bring a friend and check out the 2-player co-op mode.

Golden Force is a story of greed, glory, friendshi… mostly greed and glory really. Actually probably mostly greed. Join the team of Mercenaries as 1 of the 4 characters (or 2 of 4 if you’re playing with a friend) and defend the Muscle Archipelago from the grasp of the horrifying Demon King.

Golden Force has launched today Steam, the game is now discounted by 20%.