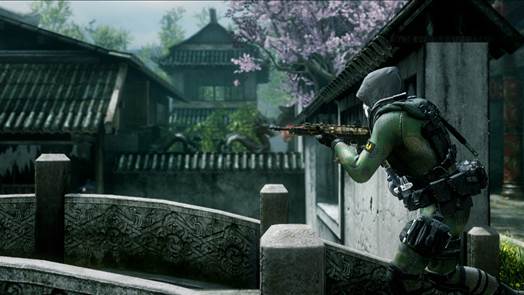 Sydney, NSW – August 1, 2014 – Call of Duty®: Ghosts caps off an extraordinary season of content with the release of the fourth and final DLC pack, Call of Duty®: Ghosts Nemesis, coming first, exclusively to Xbox platforms on August 6.   Throughout this year’s DLC season, Call of Duty: Ghosts has introduced several franchise firsts, including new killstreaks featuring the galaxy’s ultimate hunter, the deadly Predator, and one of cinema’s most iconic horror characters, Michael Myers, new weapons like the dual purpose “Maverick” Assault Rifle/Sniper Rifle and the tactical 2-in-1 Ripper SMG/Assault Rifle, as well as an all new episodic saga for Extinction.

“First off I want to thank every one of our fans. The dedication of our players is overwhelming. The whole team at Infinity Ward is really excited about the release of the Nemesis and we think it’s a great way to close out what’s been a really fun DLC season,” said Mark Rubin, Executive Producer at Infinity Ward. “DLC is a great way to unleash creative new content that is often the direct result of community feedback and interaction. So thank you again to the millions of people who play Call of Duty: Ghosts every day and keep the feedback coming!”

The DLC season closes out strongly with Call of Duty®: Ghosts Nemesis, which introduces four new multiplayer maps from the most varied locales, each with unique Field Orders specific to the map, and includes the exhilarating conclusion of Extinction’s four-part narrative with “Episode 4: Exodus,” where players fight for mankind’s survival as the Cryptid invasion reaches its deadly climax.

Closing out the final DLC Pack for Call of Duty: Ghosts is the dramatic conclusion in the Extinction narrative, “Episode 4: Exodus.”  Following the CIF Unit’s harrowing escape from the alien underworld and the successful recovery of Dr. Cross and the cortex, the team has flown in to fight off the Cryptid army’s siege of the last bastion of human resistance. Your mission is to get key personnel to safety by restoring power to the shuttle and launching the shuttle to a low earth orbit space station.

“Episode 4: Exodus” gives players unprecedented control of their escape route – choose your path, gather new intel, craft new weapons – and introduces the deadliest of enemies with a range of lethal powers, including mind control and psionic attacks – the Ancestors. As the battle for our survival draws to a close, the fate of mankind is in your hands.

Nemesis is available a la carte for a recommended retail price of $19.95, or as part of the Call of Duty: Ghosts DLC Season Pass, which gives fans access to all four epic Call of Duty: Ghosts DLC Packs** planned for release in 2014 – Onslaught, Devastation, Invasion and Nemesis – at the discounted* recommended retail price of $64.95.

Call of Duty: Ghosts is rated “MA” (Strong Violence, gaming experience may change online) by the Classification Board of Australia. Call of Duty: Ghosts Invasion is published by Activision Publishing, Inc., a wholly owned subsidiary of Activision Blizzard, Inc. (Nasdaq: ATVI), and developed by Infinity Ward.

For the latest information, be sure to visit the game’s official Web site at www.callofduty.com/ghosts, and follow us on Facebook at www.facebook.com/CODGhosts and on Twitter at @InfinityWard.