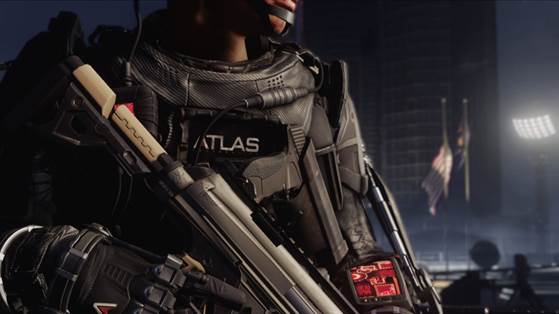 Both versions include the following:

o   Two (2) Weapons – The Bal-27 AE Assault Rifle and the Atlas 45 AE Pistol: Trick out your loadout with these two sleek weapons fitted with an Atlas Corporation theme to match your other custom content.

o   Atlas Player Card: Leave your mark on any killcam with an Atlas player card, featuring both a custom Atlas calling card and custom Atlas emblem.

o   Five (5) Bonus Supply Drops: Supply Drops are part of the revolutionary changes in Call of Duty: Advanced Warfare that Sledgehammer Games is bringing to Call of Duty multiplayer.  You’ll be well-prepared for battle as soon as you boot up with five bonus supply drops, which unlock a variety of game-changing, in-game content from player customization gear to weapons.  More information on Supply Drops and the full suite of multiplayer options will be revealed on Aug. 12.

o   Single Player Exoskeleton Upgrade Token: Over the course of Campaign mode, players unlock exoskeleton perks and abilities that help tackle various obstacles and challenges. This token provides an extra upgrade for your exoskeleton, so you’re already at an advantage when jumping into the Campaign.

Penned by the team of storytellers at Sledgehammer Games and boasting true next generation visuals, Call of Duty: Advanced Warfare jolts players forward in a groundbreaking experience that’s ripped-from-the-headlines-of-tomorrow, envisioning a future where both technology and tactics have evolved to create a new era of combat for the franchise.

Fans looking for more information can tune-in Aug. 12 for the worldwide reveal of Call of Duty: Advanced Warfare multiplayer.  Catch the latest info from Sledgehammer Games on the advanced era that exoskeleton gameplay delivers along with a full debriefing on new maps, modes, weapons and more.  For program information, check out www.callofduty.com, www.facebook.com/callofduty,www.youtube.com/callofdutyor follow @CallofDuty_ANZ on Twitter.  Call of Duty: Advanced Warfare is not yet rated.