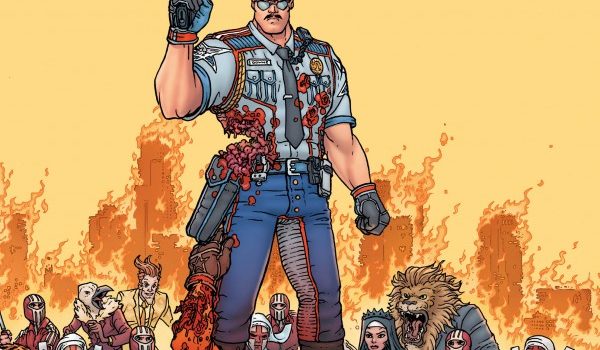 Summary: Juvenile, simplistic, over the top... but fun!

Zombies have been a big hit in the media for quite some time now… personally I’m not the biggest fan… they always seem a bit dull. But what if someone took the notion of an unkillable killing machine… but twisted it so it was on the side of justice, what if they made it a cop. A cop who can’t be killed! Enter Officer Downe! Playing like a cross between Robocop and Judge Dredd, officer Downe is a criminals worst nightmare. They can beat him, torture him and he will keep coming back, never stopping until justice is served! 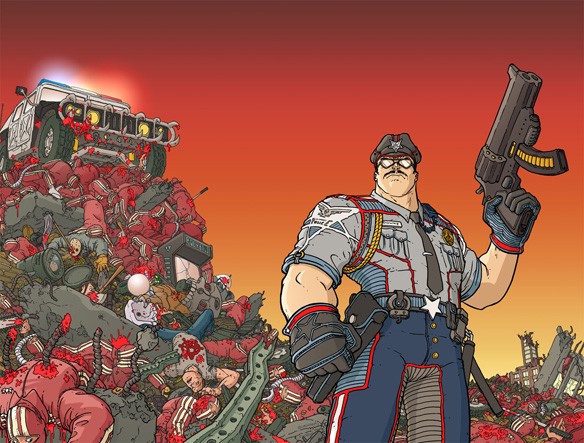 There’s not a lot of depth to any of the characters, but there doesn’t really need to be. This is as much a visual read as anything else. Each page is filled with the exploits of this regenerative seemingly unstoppable police officer. There are some nice jokes however and the one involving the Lionheaded crime boss requesting his “stress reliever” hum The Tokens tune is a nice almost dad joke (if you aren’t aware, The Tokens are famous for the song “The Lion Sleeps Tonight”.) 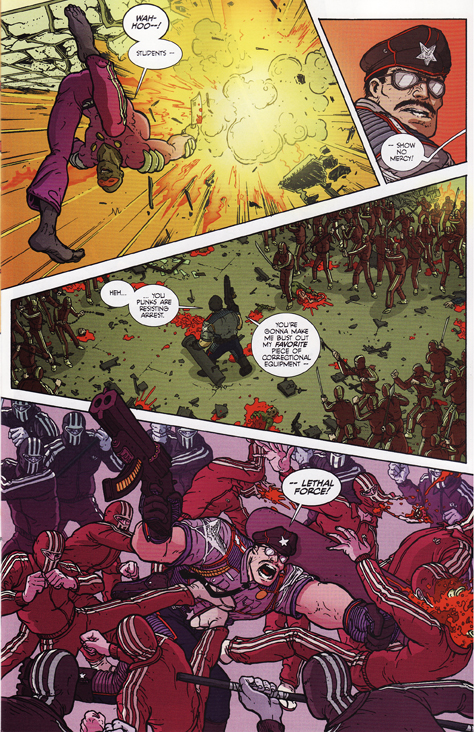 This is where it gets interesting. This is very much a “visual” comic… the viscera and mayhem fill the scenes and it can be almost a “Where’s Wally” of bits and pieces at times. There are plenty of bright colours used to keep the senses on high alert and there are also panels that would make the supply of red inks nervous of a stock shortage. The very look of Officer Down is set to strike fear into his enemies being larger than life and inflated to muscular overload. It’s easy to see how Officer Downe would be quite a formidable foe. 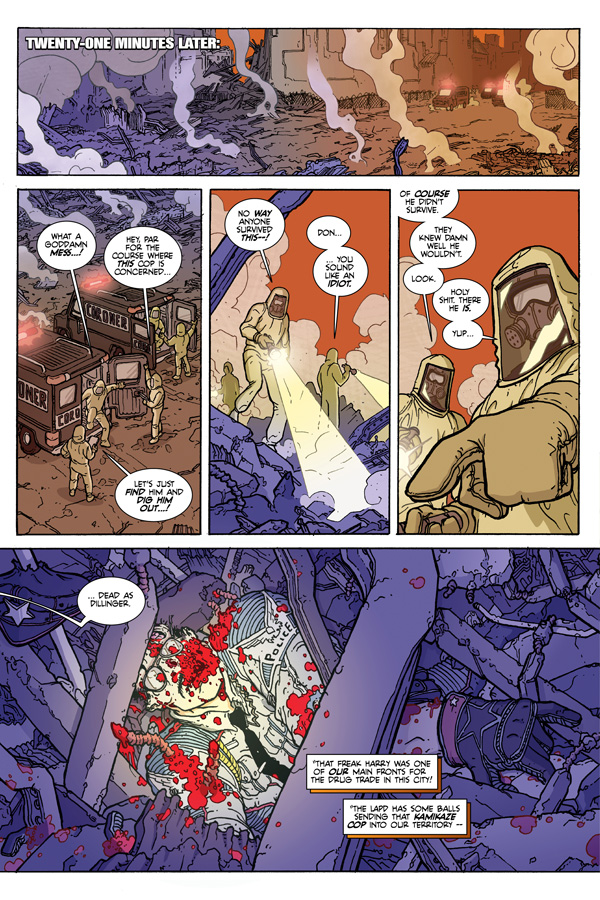 Imagine the T-1000 but made of flesh and blood instead… he gets shot to pieces… as long as you bring the bulk of that mess back, they can regenerate him only to send him out to continue his never ending quest to stop the bad guys. Of course the similarity to Judge Dredd isn’t just in his apparent ability to be unstoppable, there’s also the reckless use of force, the acting as judge jury and executioner on the spot. It’s almost like he’s a police sanctioned vigilante. There’s a great addition to the story which is the script for the movie that was made and production photos. I haven’t had a chance to see the movie though I am curious to. Having said that I was disappointed to see their choice of actor for Officer Downe… but I need to explain that, I have nothing against Kim Coates, I actually think he’s a great actor… but as mentioned earlier, Officer Downe is a huge beast of a man and I think it does the character a disservice to cast someone who is of average size. I’m aware of many bodybuilders or at least weightlifters who would have been far more physically appropriate (though getting the acting chops would be harder and in that regard Kim Coates is a great choice). That’s just me nitpicking and for all I know, when I get around to watching it I might find that physically he isn’t that big… but he projects a giant on screen (I suspect this to be the case as Coates has a lot of talent!) 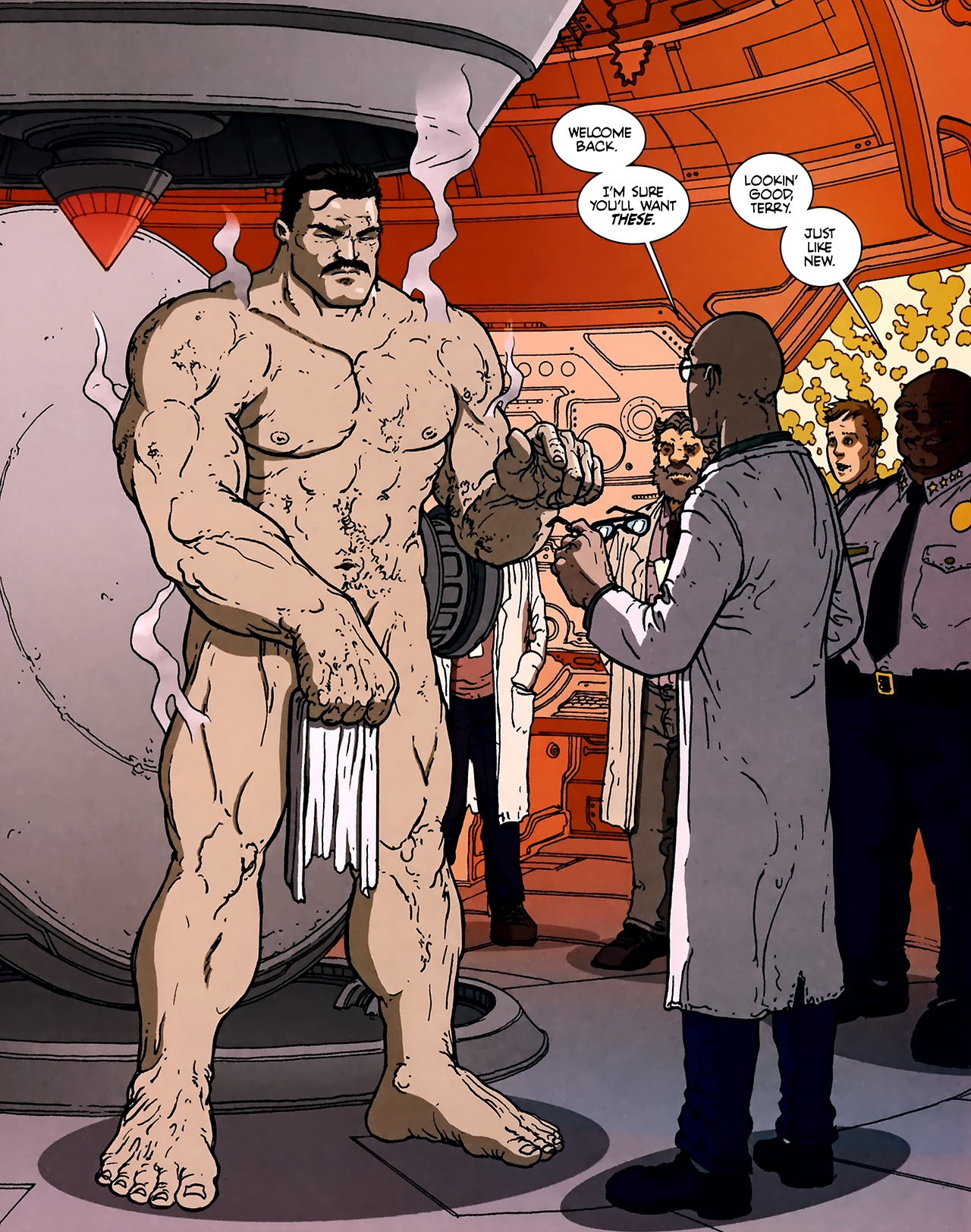