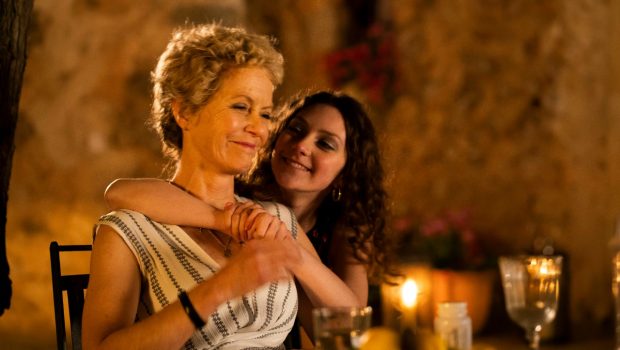 Off The Rails – Official Trailer

About OFF THE RAILS:

After best friends Kate, Liz, Cassie and Anna finished university, they didn’t have a care in the world. With their whole lives ahead of them, they decided to pack their bags and head off Interrailing around Europe for a month. Their final destination was the Cathedral of Santa Maria of Palma on Mallorca, where they missed the dazzling ‘Festival of Light’. When the trip was over, they promised that one day that would repeat the special journey again. But life got in the way.

Now the quartet has become a trio with the death of Anna. As a parting gift, Anna leaves her friends tickets to repeat the journey, but on one condition – Kate (Jenny Seagrove), Liz (Sally Phillips) and Cassie (Kelly Preston) must bring Anna’s 17 year-old daughter Maddie (Elizabeth Dormer-Phillips) with them. Agreeing to take Maddie with them they realise they have only five days to reach their destination of Mallorca, so they don’t miss ‘God’s Disco Ball’ – The Fiesta de la Candelaria – which occurs once a year.

This time around they find travelling across Europe much more difficult, as lost passports, train strikes, and unexpected romantic entanglements throw their friendships into chaos. The question is: will they make it in time and honour their friend’s memory?

OFF THE RAILS is directed by Jules Williamson and stars Kelly Preston, Jenny Seagrove, Sally Phillips with Ben Miller and Franco Nero.

OFF THE RAILS coming to Australian cinemas on December 2nd 2021