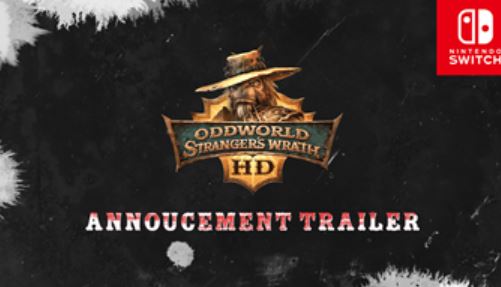 Today, via the Nintendo Indie Showcase Livestream, Oddworld Inhabitants unveiled the launch date for Oddworld: Stranger’s Wrath HD, the first of at least three Oddworld games coming to Switch in 2020.

Originally released in 2005, Stranger’s Wrath was hailed as a “stunning and exquisitely realized masterpiece” by Game Informer Magazine* and earned a Metacritic score of 88/100.  It was nominated for Outstanding Achievement in Animation at the Academy of Interactive Arts & Sciences Interactive Achievement Awards.

To this day, Stranger’s Wrath’s gameplay remains unique as it offers an innovative mix of shooter, platformer and puzzle genres with a hybrid viewpoint that allows the player to switch between 1st person action with 3rd person exploration.

“We’ve rounded up some great new graphical and performance upgrades for the Nintendo Switch version of Stranger’s Wrath and we’re heading into the bounty store to deliver the best version of this game for Nintendo fans,” said Lorne Lanning, co-founder of Oddworld Inhabitants.

Taking full advantage of Nintendo Switch, Stranger’s Wrath HD has dramatically improved audio and full 1080 HD graphics at 60 fps, super tight gyro-aiming for fine adjustments, and blazing-fast load times. “Whether you take it on-the-go or use at home via TableTop or TV Mode, the game’s 12 hours of story line and five hours of side missions plays best on Nintendo Switch,” said Lanning.

Stranger’s Wrath is a take on the classic Western motif with sci-fi and socially conscious elements. It stars Stranger, a mysterious bounty hunter who refuses to use guns. Our hero is in poor health that needs Moolah to buy the lifesaving surgery. Set in the wastelands of Western Mudos, Stranger helps the town folk capture outlaws and scoundrels before accepting the ultimate bounty.  Rather than traditional shooters with bullets and bombs, Stranger takes a more organic approach to ammunition, using various critters (Live Ammo) to launch at enemies from his crossbow.