There’s a nice rhythm that you’ll fall into with the first thirty hours of Octopath Traveler. You’ll follow the trail of towns, meet new characters as you go, learn their backstory then defeat a boss in order to recruit that character into your party. Once you’ve unlocked all the characters and completed a few side quests, you’ll conveniently find yourself at the recommended level to begin the chapter two quests. It probably won’t be until around the beginning of chapter three that some of the more loathsome JRPG tropes that were lying dormant start to become more pronounced. Thankfully, Octopath Traveler’s combat and visuals are interesting enough to distract you from some of these more egregious aspects. 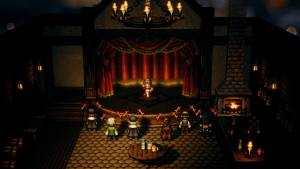 Octopath Traveler is like a modern evolution of the classic 90’s era JRPG in almost every aspect. The most obvious and immediately noticeable example of this is in the game’s visual design. Every facet of the game’s visuals, from the menus to the characters, manages to strike an impressive balance between 16-Bit nostalgia and modern graphical prowess. 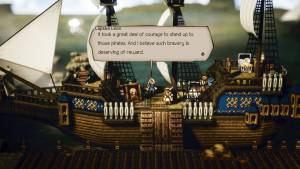 The most impressive of these aesthetic design techniques is showcased in Octopath traveler’s open-world. The game layers highly detailed pixel art sprites onto large 3D backdrops and employs a variety of camera filters to create gorgeously unique paper-craft-esque landscapes to explore.

There’s a nice variety to the visual design of the different regions in the world that works well to give each location a sense of identity. This variety in the landscape design also makes each location feel distinct and makes the world feel expansive, despite there being only a relatively small number of areas to explore (a portion of which are caves with very similar art assets and layouts). 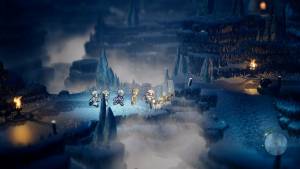 As you explore the world, along with looting treasure chests and meeting new characters, you’ll also be frequently confronted by the classic JRPG trope of random enemy encounters. Random encounters have been a longstanding pet peeve of mine, yet I found myself actually enjoying the sporadic random battles in Octopath Traveler simply because the combat is so satisfying. 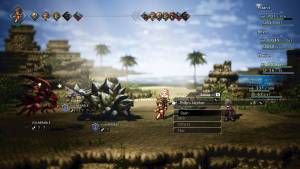 Each turn, your characters gain a battle point that can be stored for later and used to either attack again or increase the power of their spells. The combination of these mechanics makes combat an exercise in efficiency and forward-thinking rather than tiresome button tapping. This is exemplified during the game’s many boss battles, as boss enemies often have unique mechanics and large health pools, requiring significant planning and strategy to defeat them. I found it extremely satisfying to plan out my moves, banking extra attacks and empowering spells to ensure the enemy is constantly being whittled down whilst also keeping my party healed and buffed. 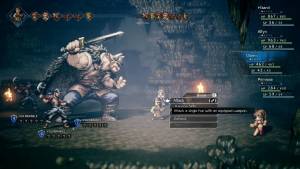 Adding an extra layer of depth to the puzzle-like combat mechanics is the impressive amount of customisation made available to your party line up. Each of the eight characters has a specific class with unique spells and abilities. These classes are warrior, thief, hunter, scholar, cleric, apothecary, merchant and dancer – all of which fit somewhere on the spectrum of typical JRPG classes. Characters can also take on subclasses (known as jobs), allowing them to learn the spells and abilities of another class. This allows you to strategically build your party to suit your preferred play style or to create a team that will be most effective against a particular boss. 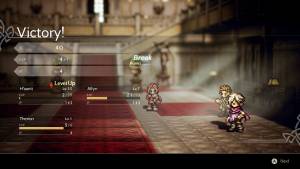 Perhaps it’s rather telling that Octopath Traveler’s story hasn’t been mentioned yet. You might expect the narrative of a JRPG with eight unique character storylines to be one of the game’s strongest qualities. Unfortunately this isn’t the case with Octopath Traveler for a number of reasons.

The basic gameplay loop and narrative progression for the majority of Octopath Traveler is as follows:

On the one hand, I actually really appreciate this condensed, simplified progression structure. I like knowing that if I’ve got an hour to spare, I can sit down and make some meaningful progress through the game and won’t be wasting time wondering what to do next or when the next big story moment will occur. On the other hand, the majority of the character storylines are simply uninteresting and rather poorly written. 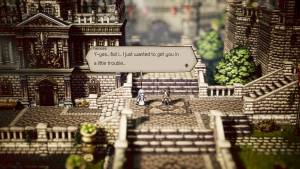 Each character in Octopath Traveler has a unique storyline that plays out completely independently from the other characters (at least from what I’ve seen after forty hours of play time at the time of writing), yet are all taking place simultaneously. The stakes and urgency of these storylines wildly differ, which creates a bizarre dynamic to the progression for the player. It seems odd that a group of heroes would decide to put an investigation into a murderous cult on hold in order to help a child search for his friends brooch. Yet you wouldn’t be able to follow the storyline of the murderous cult from beginning to end without searching for the brooch, as the chapters are gated behind lofty level requirements that can only be reached by finishing the previous chapters for all the other characters (unless you want to spend hours grinding for experience). 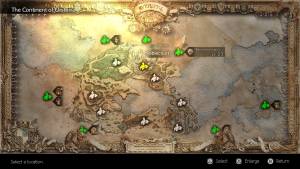 On top of this, there are moments in the progression that will likely require you to grind for levels and equipment. When moving from one set of chapters to the next, it’s likely that you’ll find yourself under-levelled and under-geared to take on the enemies you’ll face in the following set of chapters, even if your characters are at the recommended level. This was particularly noticeable when moving from chapter two to chapter three. This always felt like a sour interruption to the comfortable, consistent pace of the game that was mentioned earlier, but it usually only took an hour or so of grinding to get back up to speed. 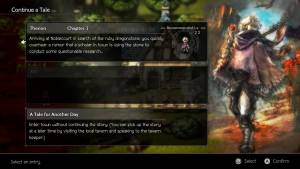 As uninteresting and silly as the various storylines in Octopath Traveler may be, they still work well as the backbone to an expansive JRPG globetrotting adventure. Also, the way the game is structured with these character chapters requires you to have the character whose chapter you want to complete within your active party of four. This means you’ll constantly be changing your party around and re-speccing characters to create a viable, cohesive team – so you wont be able to simply play with the same four characters all the way through. 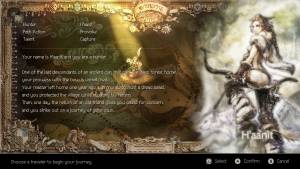 Also worth mentioning is Octopath Traveler’s fantastic soundtrack. Whether it’s setting a calming, jaunty tone as you explore a tranquil seaside town or creating a sense of dread in the lead up to a particularly terrifying boss encounter, the background orchestral music is superb. Plus the catchy battle music does what all good JRPG battle music should do – buries itself deep within your psyche only to randomly pop into your head when you least it expect it.

Octopath Traveler feels like a classic JRPG that’s been retooled to suit a modern gaming climate, for better and for worse. The ambitious narrative and progression structure ends up feeling rather messy and completely sucks the life out of the game’s numerous storylines. However the combat system is one of the most engaging JRPG combat systems I’ve ever seen and the graphics were continually impressive. For me, these positive aspects heavily outweigh the negatives and I’d happily recommend Octopath Traveler to both JRPG veterans and newcomers alike. 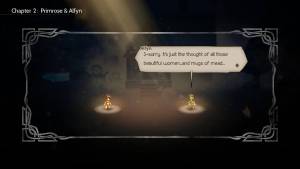