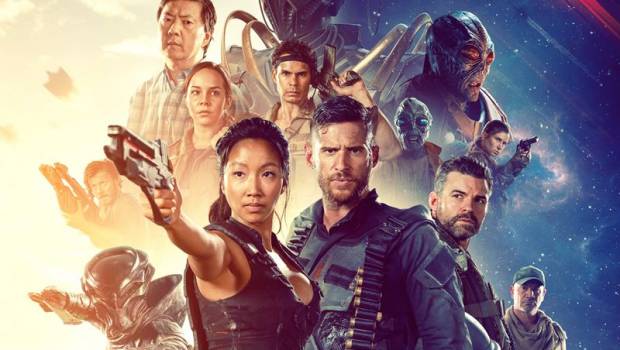 Summary: Australians fight aliens by getting drunk and being racist. Why change the habit of a lifetime? Too messy, needs more restraint.

The sequel to Occupation, but you don’t really need to have watched the first one to get this movie. Everyone just seems to fit in with plot and keeps going as normal. This was featured at MonsterFest but due to the extended lockdown and not knowing that much about it at the time I did not make it to see the movie when it was at the festival.

Being a big fan of John Marsden’s Tomorrow series of books I was interested in how they would handle an alien invasion series set in Australia. It seems what happens is Australians get drunk and racist, why change the habit of a lifetime? Even the supposed good guys are dicks towards the main alien allies, calling them “normal Aussie” names and not even bothering to learn the language.

The ideology of the bad guy is stinky and there is a bad aftertaste of right wing nationalism in the script writing. Independence Day did famously have the “welcome to Earth!” but it is so overblown like everything in that movie it suits it.

There is too much going on at once in this movie and it makes it messy to follow. A lot of the earlier scenes seem to be cribbed from the Terminator future war scenes. Beyond Skyline did this sort of storyline a lot better and was just a couple of dudes from the Raid movies kicking arse at the end.

Temuera Morrison does get his chance to shine, but it is not until half way through and you don’t get to see much as the scenes at Pine Gap are too busy and hard to follow. When they finally get to the end it says “Chapter 1” and I thought “oh piss off!”

When you finally get everything you want it can be too much of a good thing. It is like drawing with oil pastels, trying to use too many colours will make it a smudged, oily mess with no definition which is what happened here. Show some restraint and leave some things understated so you give things a chance to breathe and it will work out better.

If you really want an Australian sci-fi movie and to see Sydney get destroyed, then knock yourself out. I thought it got blown up better in Godzilla – Final Wars as did 750 other people who raised the roof at the midnight screening one year at MIFF.