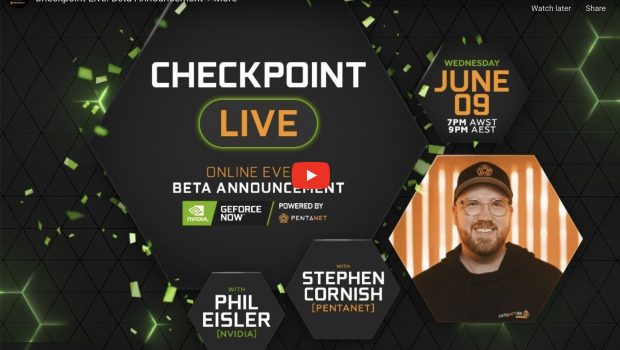 GeForce NOW Powered by Pentanet, the premiere cloud-based game streaming service, has so far received more than 45,000 Australian registrations in a fantastic show of support for the cutting-edge service. Pentanet founder and managing director, Stephen Cornish, tonight revealed the highly anticipated plan for the beta program in a virtual press conference, Checkpoint LIVE:

“One does not simply launch real-time game streaming on Australian internet,” said Mr. Cornish. “We are committed to bringing Australia to the global standard of gaming and to build a service we ourselves would play.

“Once everything goes to plan, and we are satisfied we have done everything we can, we expect to be able to launch the GeForce NOW Powered by Pentanet cloud gaming service in Australia from October of this year,” he said.

Phil Eisler, general manager and vice president of GeForce NOW at NVIDIA, says of the service: “More than 10 million gamers across 70 countries are using GeForce NOW, supported by over 20 data centres worldwide. We’re thrilled to bring the service to Australia, working with Stephen Cornish and Pentanet, who share our passion for gaming and delivering a high-quality cloud gaming experience.”

In summary, there are three major phases in the testing and roll-out of GeForce NOW Powered by Pentanet in Australia: Beta Quests, Beta Play and National Release.

Larger than just a beta access portal, Pentanet has developed CloudGG – an entire gamified experience that allows for the best possible capture of Beta data to improve the experience in Australia:

Through the CloudGG portal, you’ll be able to complete Quests, earn XP, and level up as steps towards the Beta Play program. With timed release of new Quests regularly, users can level up, earn XP, badges, achievements, and win weekly prizes.

The Beta Quests are important in planning the infrastructure to deliver the highest quality service and will help guide the selection for the next component of the testing: Beta Play.

Pentanet’s Beta program has been designed to learn about the optimal performance of the GeForce NOW service in Australia across as many different variables as possible. A staged release to Beta Play will see a limited number of players onboarded to start, with new users added to the testing pool every week.

To be selected, Pentanet are looking for a diverse group of Beta testers who have been highly engaged in the Beta Quests – people most interested in helping Pentanet build the future. XP will be important to gain and collect for major steps towards Beta Play.

After reviewing and ranking XP, Pentanet will check through the results of the Beta Quests. The goal will be to on-board a diverse group of testers across many tech specs, internet services, devices and locations. A series of channels and groups will be rolled out to capture user experience data throughout the hands-on Beta Play program.

Once Pentanet is satisfied the service can roll out in line with the global standard of gaming, the national release will go live. Priority access will be given to Beta Testers, Pentanet internet subscribers, and active Cloud.GG users. This is where the importance of XP will become apparent, with early supporters being rewarded for their ongoing support of Pentanet.

Pentanet and NVIDIA look forward to launching GeForce NOW in Australia in October 2021. More details surrounding the official launch will be revealed in the coming months.

As Pentanet’s Cornish explains, the staged Beta program has been designed to gather as much data as possible on infrastructure demand and user experience. “We’re building a service we ourselves would play, and believe that a staged approach of adding new testers and users over time will allow us to build a service that we as gamers are proud of,” he said.

Starting today, the https://cloud.gg portal is now live for players to access. You can begin your Beta Quests, earning XP, achievements, badges, prizes, and be in the running for Beta Play. The results of the Beta Play program above will rapidly refine the experience for all users of GeForce NOW Powered by Pentanet, so players are encouraged to begin the Beta Quest journey today and help shape the future of this incredible service in Australia.

Head to https://cloud.gg to begin your Beta Quest journey towards the GeForce NOW Powered by Pentanet Australian Beta.

An FAQ about Pentanet and the GeForce NOW service in Australia is available here: https://gfn.pentanet.gg/faq/

This is the current list of GeForce NOW games, subject to Australian classification: https://www.nvidia.com/en-us/geforce-now/games/