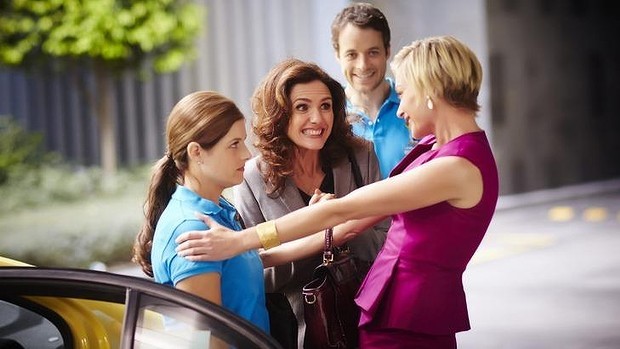 There’s one word to describe this comedy and that is tiresome. Not fun, not entertaining, it’s just energy draining. Sure, there are parts in the movie that are somewhat funny to the point where you MIGHT breathe heavily out of your nose, but no laugh out loud moments. But lets set the scene first. Caroline (Robyn Butler) is the head of a suburban Australian household who keeps her lazy author husband Richard (Erik Thomson) in check. She’s an outgoing real estate professional and is dealing with a madhouse. There’s clichéd teenage rebel daughter without a cause (or charisma) Clare (Philippa Coulthard) and silent little sister Harriet (Lucinda Armstrong Hall). Harriet has an obsession with former childhood pop star turned sensual late teen eye candy (a la Hannah Montana/Miley Cyrus) Honey Holloway, who’s played by Lucy Fry. Now here’s the kicker. Honey is actually a distant relative to the family and is coming to visit them during her Australian tour. Yay what fun! I’m sure this ditzy pop princess won’t become an annoying character in this film, with her mind numbingly fake American accent.

Moving on. As Honey is escorted around her visit to Australia, she’s surrounded by her entourage of carers that includes her manipulating mum/manager Beth, played by Portia de Rossi. Anybody thinking they might get an Arrested Development worthy performance from de Rossi should note that the writing for this film isn’t even close to being that tight. When Beth arrives in the country with a large amount of painkillers she’s arrested and put into rehab. Yay! The fun times are continuing. With no other choice Honey has to stay with her normal, suburban family. Let the odd couple storyline begin. This attempt to have story about a fish out water celebrity living in a middleclass home, mixed with an attempt at a Judd Apatow-esque look into middle age living, is too much. Because of Honey’s presence, drama after drama unfolds. Unfaithful husbands are uncovered, teenage romances die out, weddings are called off, awkward first dates occur, families argue, pervy paparazzi appear, unwarranted and overused fat jokes are made, contracts are cancelled and people lose their jobs. It’s just so much drama for one silly comedy that you eventually don’t care what happens to the characters. 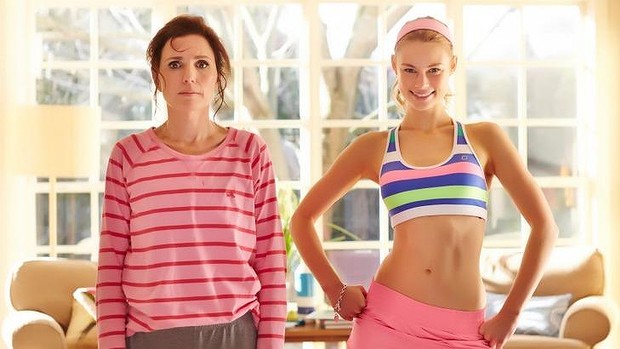 On the upside, the movie has a few saving graces but they barely work. Hamish Blake is the most enjoyable to watch as the bumbling but charming fiancé of Robyn’s sister Katie (Lucy Durack) but his performance doesn’t save this movie from the clusterf*ck that it is. Robyn Butler should be congratulated though for pulling off double duties as both the lead actor and sole writer of the film but that alone isn’t enough. Even though the story does eventually lead to a climax about whether or not Honey will do a nude photo shoot it just doesn’t matter. We never get to know anything about the characters so why should we care? Angus Sampson as a sleazy photographer might have added some beef to this thinly spread plot but his talents are underused. The story is so uneven and jam-packed with a million problems and side plots it’s like Butler and director Wayne Hope were trying to make five movies in one. It’s shame because Australia can produce some decent comedies from time to time but unfortunately this is another missed opportunity.

Summary: The story is so uneven and jam-packed with a million problems and side plots it’s like Robyn Butler and director Wayne Hope were trying to make five movies in one.