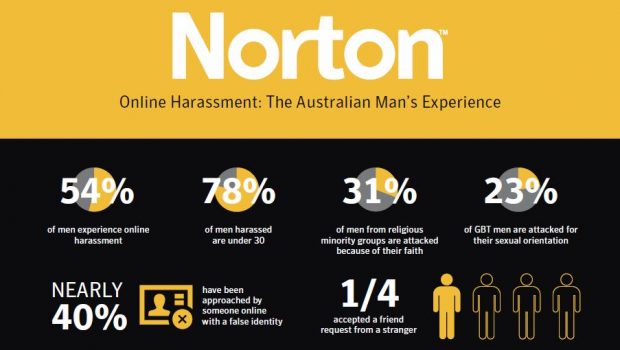 LGBTI People, Men from Religious Minority Groups and Disabled Males among the Most Vulnerable

Mark Gorrie, Director, Norton Business Unit, Pacific region, Symantec said the research uncovers the prevalence of harassment against men in the online world and reveals that online harassment is an everyday trial for specific members of our community.

“The survey findings indicate that many Australian men apply the ‘she’ll be right’ attitude towards their negative online experiences. Most men ignore (41 percent), block (33 percent) or unfriend (21 percent) perpetrators, but this approach doesn’t address the emotional impact these experiences may have. Ten percent of men indicated they felt powerless to do anything, 10 percent reported the activity to the police, and only seven percent sought legal advice,” said Gorrie.

For 20 percent of the Australian men surveyed, their online harassment experience resulted in them changing the privacy settings on their social media accounts. One in seven men surveyed (13 percent) changed the nature of relationships with some friends; 14 percent lost friends; 11 percent closed their social media account and under five percent moved house (four percent) or changed jobs (three percent).

“Norton hopes this research will encourage Australian men to speak up about their online experiences, report serious harassment and threats when they occur and take reasonable security and privacy precautions while online,” Gorrie added.

The impact of online harassment

Australian men may be targeted online for a range of reasons. In nearly half of cases (45 percent) no specific aspect of a person’s lifestyle or circumstances are singled out. When aspects are targeted, top issues include attacking men based on their social background (12 percent), physical appearance (11 percent), weight (10 percent), politics (10 percent), race and ethnic background (nine percent), sexual orientation (nine percent), and religion (eight percent).

In cases of harassment, feelings of irritation (31 percent), anger (28 percent) and disappointment (25 percent) are the most common response. Depression and anxiety are also common at 14 and 16 percent respectively. Seeking help is rare for Australian men with less than one in 10 Australian men (seven percent) choosing to get help for depression or anxiety, and almost one in 10 cases (10 percent) prompting police involvement.

Georgie Harman, CEO of Norton’s long-term partner, beyondblue, said her organisation’s work was increasingly being carried out digitally with cyberbullying and online harassment having a lasting impact on both men and women.

“In general, the difference between men and women seeking help is that men tend to put off getting any kind of mental health assistance because they think they’re supposed to be tough and self-reliant.

Negative online experiences that have an impact on men’s mental health can be hard for them to identify and acknowledge, and so we often don’t realise how detrimental cyberbullying and online harassment can be until it’s too late,” she said.

Earlier this year, Norton released its Online Harassment: The Australian Woman’s Experience survey results and when comparing the results, it was uncovered that the overall online experiences of men are not dissimilar to women. However there are striking differences with online harassment:

Twice as many women, at 14 percent compared to men at seven percent, revealed that sextortion, graphic sexual harassment, threats of sexual violence and cyberstalking are their worst online experiences. In addition, 57 percent of women under 30 are more likely to experience cyberbullying compared to 37 percent of males under 30.

Despite men acknowledging a broad range of behaviours which qualify as harassment – abuse, threats of physical and sexual violence as well as death – men (53 percent) are less likely than women (70 percent) to identify online harassment as a serious problem.

Privacy settings on social media accounts are widely used (68 percent), but about a third (32 percent) of men are still unaware, don’t know how, or haven’t found the time to use them. The survey found private settings are favoured over public by 56 percent to 12 percent respectively. One in five (21 percent) Australian men used their privacy settings to prevent people from bullying them while 33 percent used them to prevent people from stalking them. Nearly 40 percent of Australian men had been approached by someone online with a false identity yet still one in four Australian men accepted friend requests from strangers.

Some ways to prevent and address online harassment include:

REVIEW your online presence. Check your security and privacy settings on all devices and regularly change passwords.

RECOGNISE the problem if it happens and move quickly. Do not respond to the perpetrator; keep all records and evidence of the harassment by making a copy of the message, photo or video; and if you are witness to online harassment, offer support to the person being targeted.

REPORT online harassment to the relevant authorities immediately. If inappropriate content is displayed online, contact the website operators by phone or email requesting the content be removed or blocked. If the emotional impact of online harassment takes its toll on your wellbeing or that of someone you care for, please reach out to organisations such as beyondblue for help on 1300 224 636. 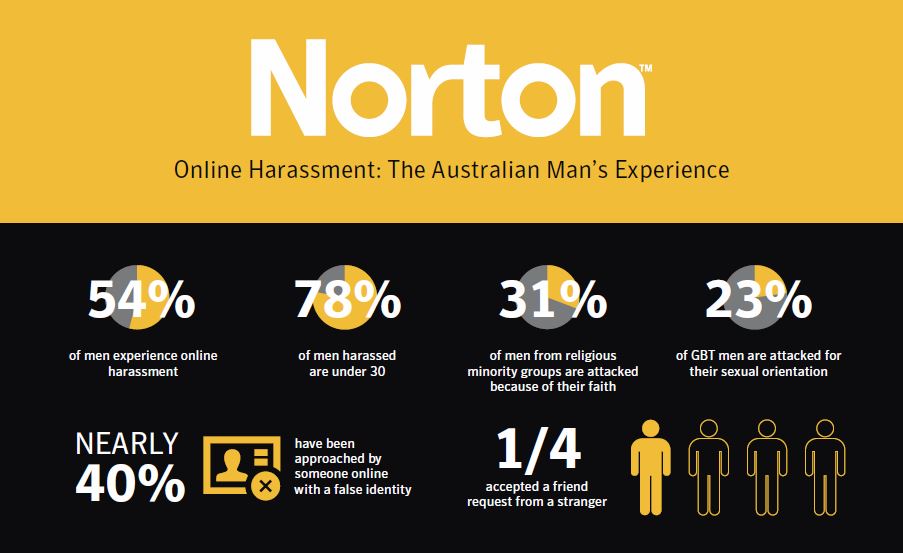 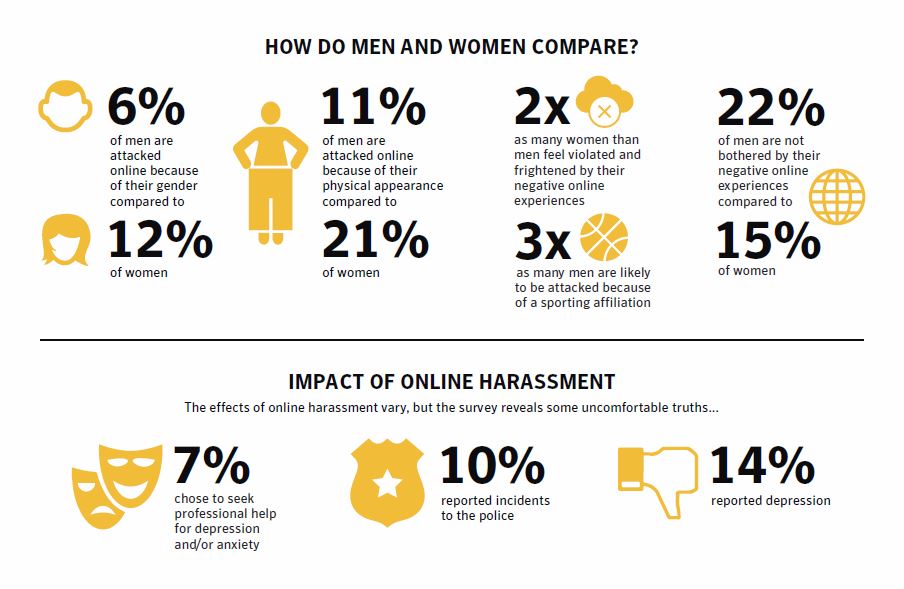 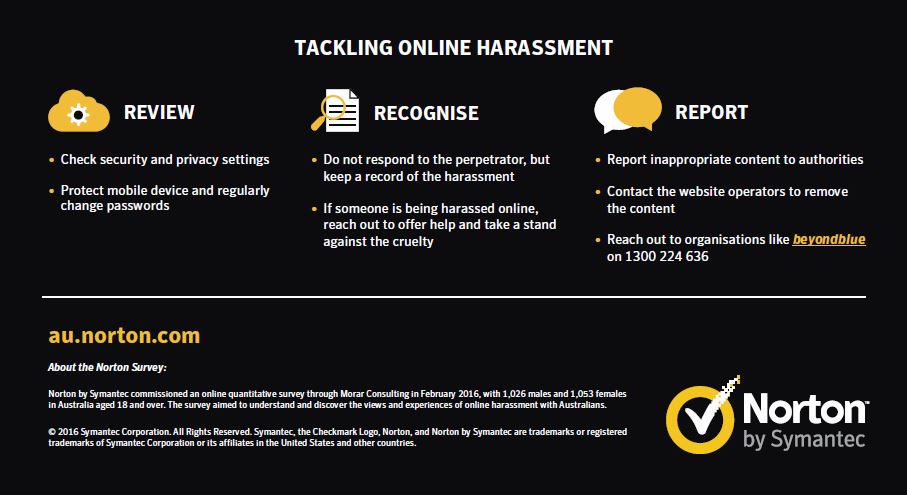 About the Norton Survey

Norton by Symantec commissioned an online quantitative survey through Morar Consulting in February 2016, with 1,026 males and 1,053 females in Australia aged 18 and over. The survey aimed to understand and discover the views and experiences of online harassment with Australian men and women.